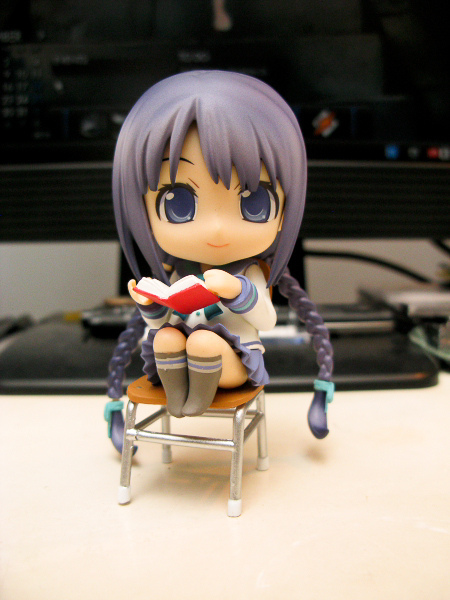 As promised from the last entry, I’ll be reviewing the very first nendoroid purchase I’ve ever made which is Toko Amano from the series Bungaku Shoujo! 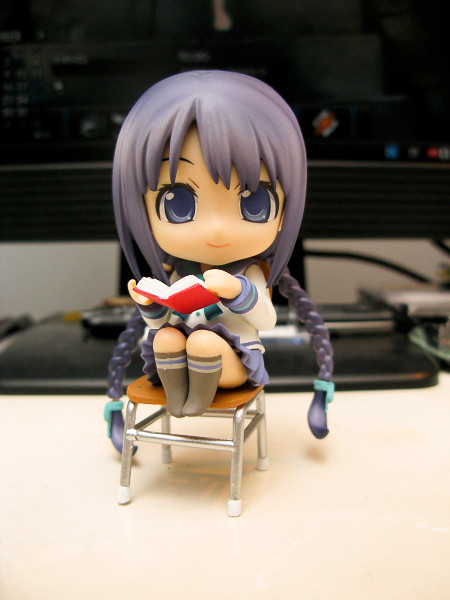 It really was a toss between Hatsune Miku Orchestra ver and Toko Amano as my first nendoroid, but I felt that I had to wait a bit until the time felt right. 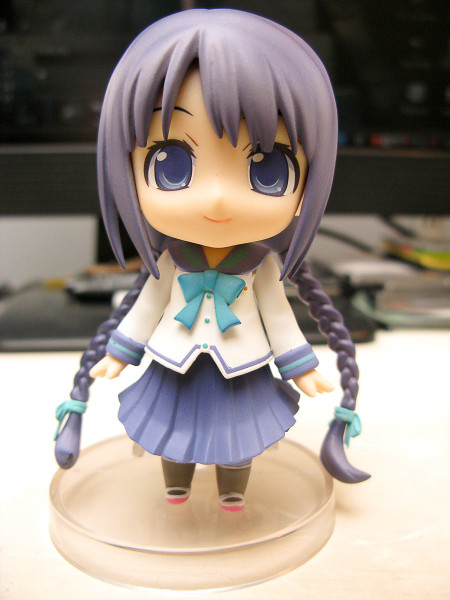 True enough, one of the toy shops here had a sale, and it was pay day, and a new shipment of goods came with Toko Amano in it. Here have a normal pose ^^ 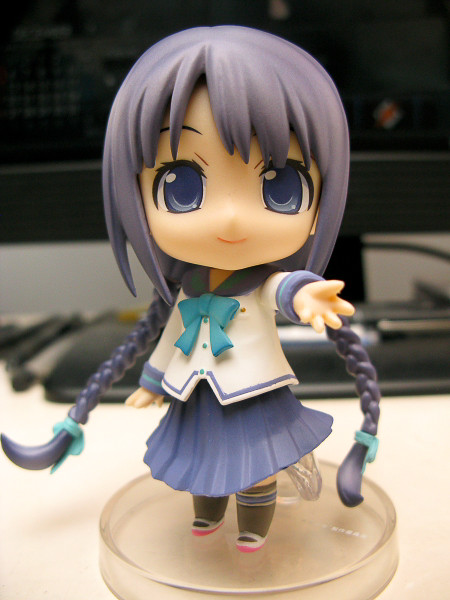 Toko giving a friendly helping hand to those in need. 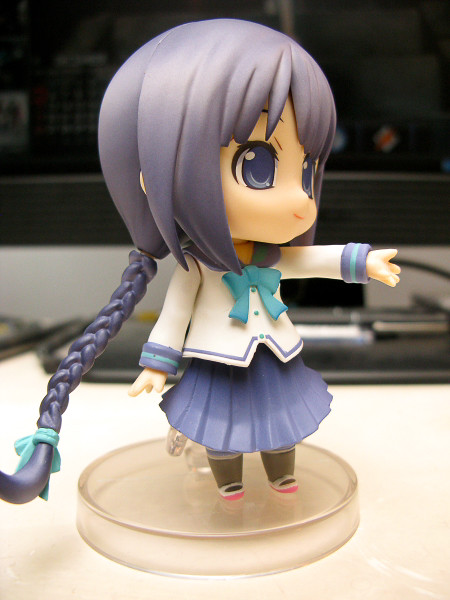 Her uniform and twin braids were done very well. 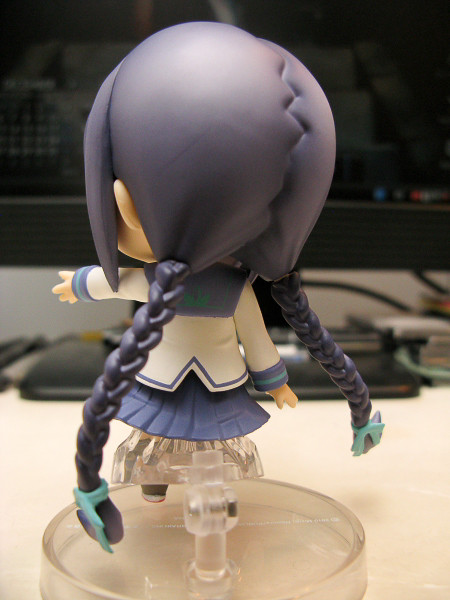 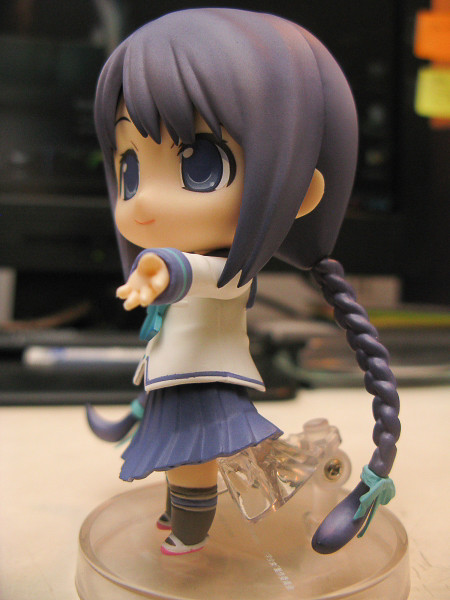 I have no idea how to go about with the “skirt stand”. ^^ 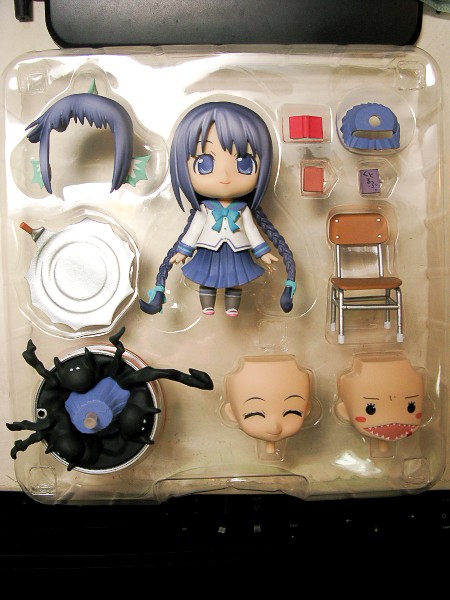 For the price of P2,300, (though I got it for P2,040 due to a discout) Toko is not a bad buy considering the other accessories she comes with as well. She has a chair, two other faces, an alternate hair, a “can”, and more. The extra pair of sandals and hands aren’t shown here ^^ 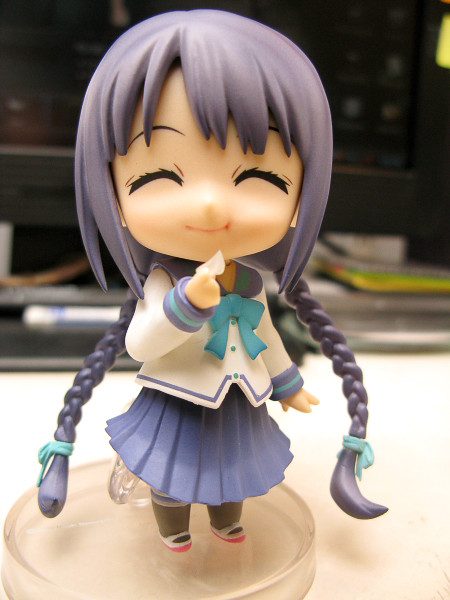 In the story, Toko Amano is a girl who really likes books, but unlike most bookish girls, she experiences the stories by “tasting” them. 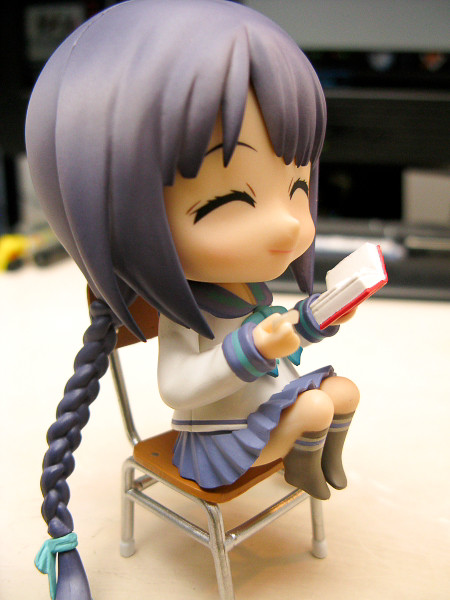 When I said taste, I mean she literally tears a piece from the pages of the book and nibbles on it. It seems Toko likes the book she’s reading at the moment. 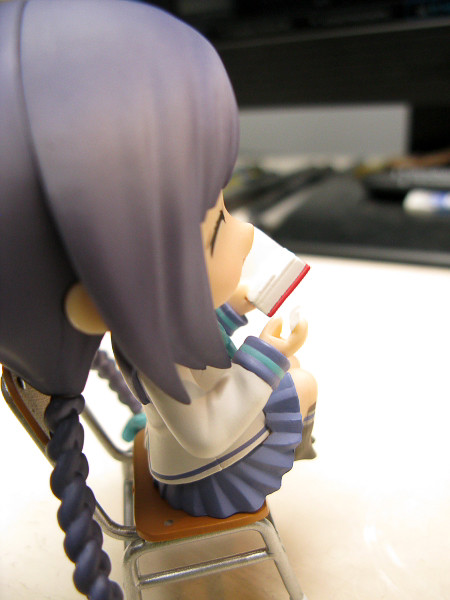 Since she eats club property books, I wonder if she commits vandalism by tearing a page from each of them XD 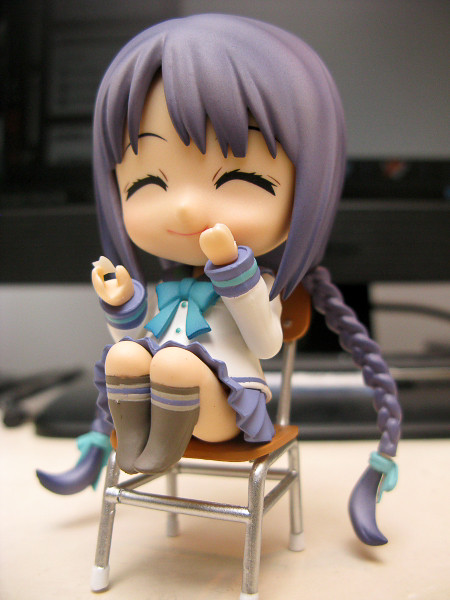 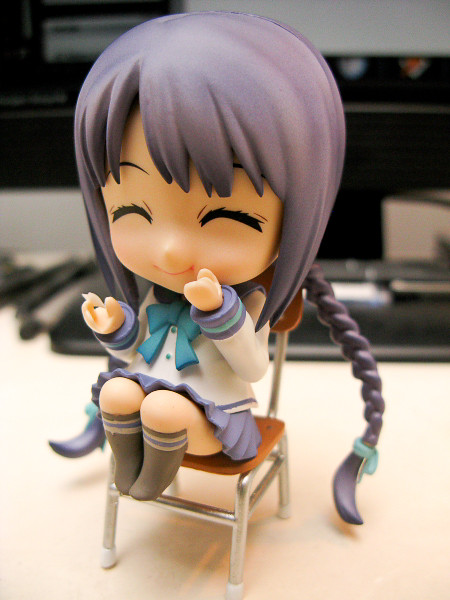 It just occurred to me that she’s eating stories that taste like chocolate but she’ll never gain calories from the paper. 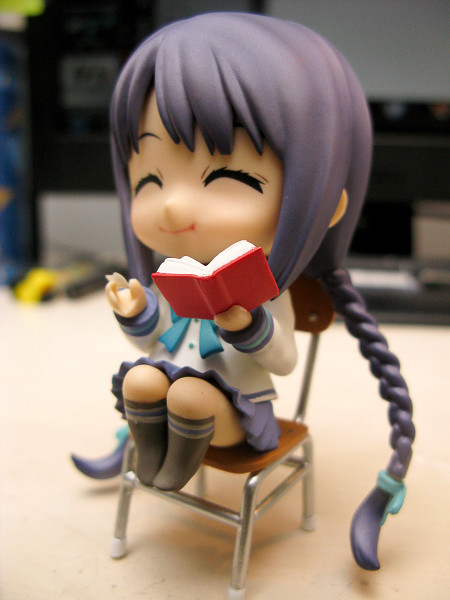 She’s also usually seen sitting that way in the series as she nibbles food errr pages, while making the male protagonist of the story “make her meals”. I won’t spoil the story, but needless to say the series itself is good. 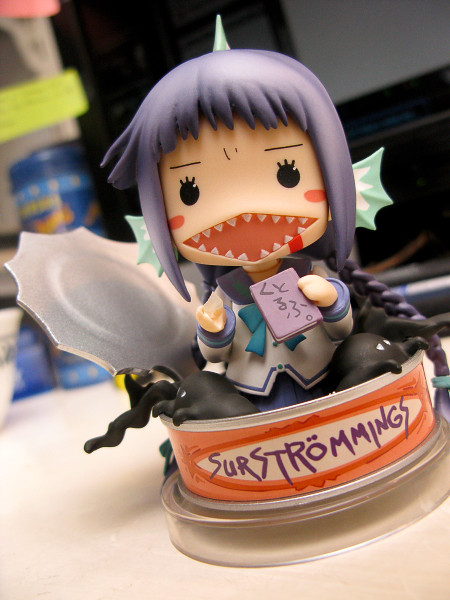 I don’t think Toko’s stomach can handle works made by H.P. Lovecraft. She been eating pages from a book called “Cthulu” apparently XD 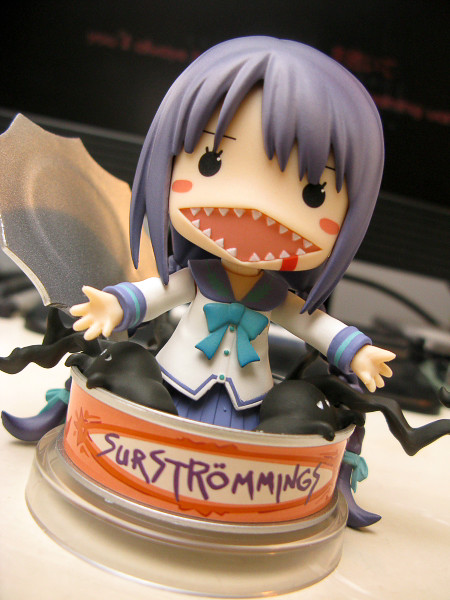 Toko in a can, surprising unwary canned good eaters. 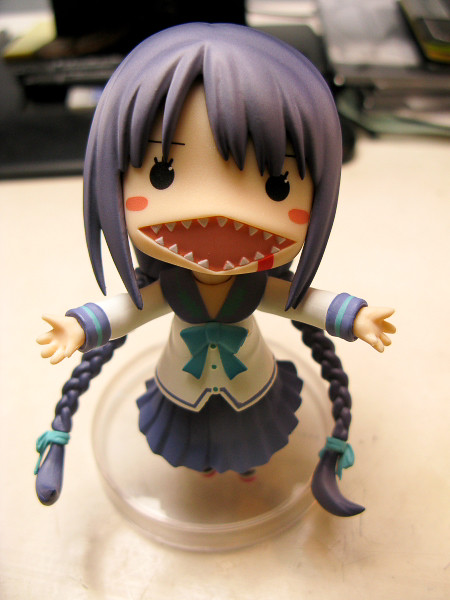 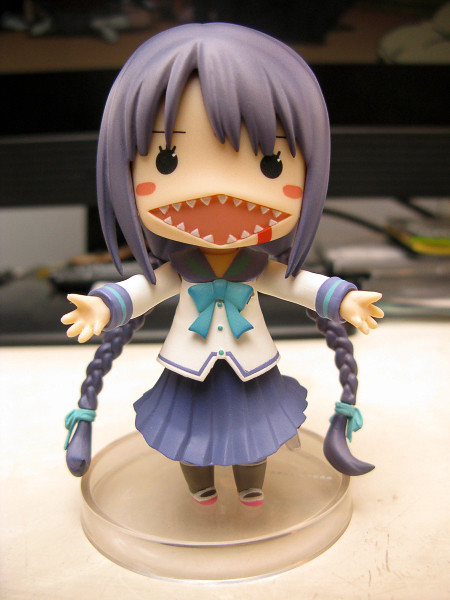 One of the best accessories I’ve seen, which also affected my purchasing decision by the way, was the “Cthulu face”. This face just had so much potential, which made me play with it for a short while using the diorama here in the house. 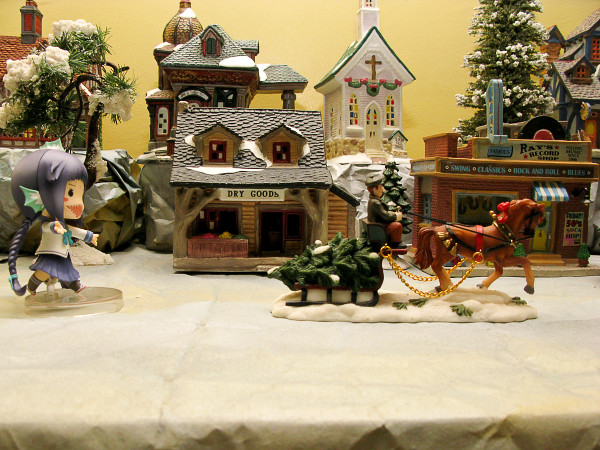 “Matte kudasai!~” Cthulu Toko just wants a hug from the horse, but it seems like the horse thinks otherwise with those sharp teeth and “book blood” flowing from her lips. 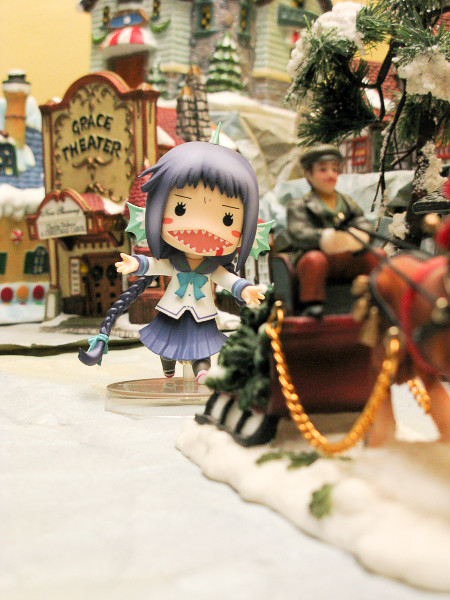 Had lots of fun with Toko and that face. 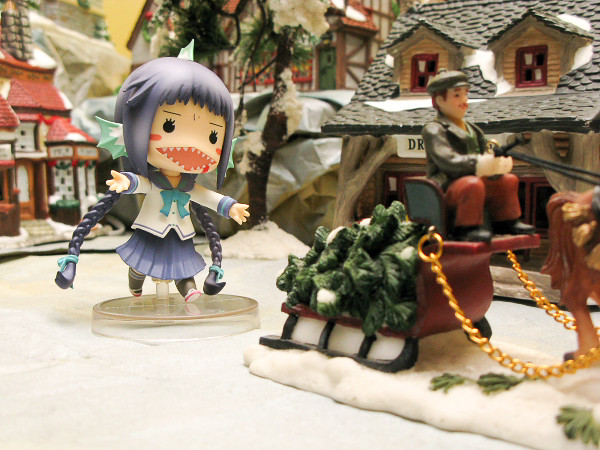 Work will be picking up and I still have other commitments to honor as well. So expect around 3 times a week of posting only, but I’ll try my best to post more whenever I can.