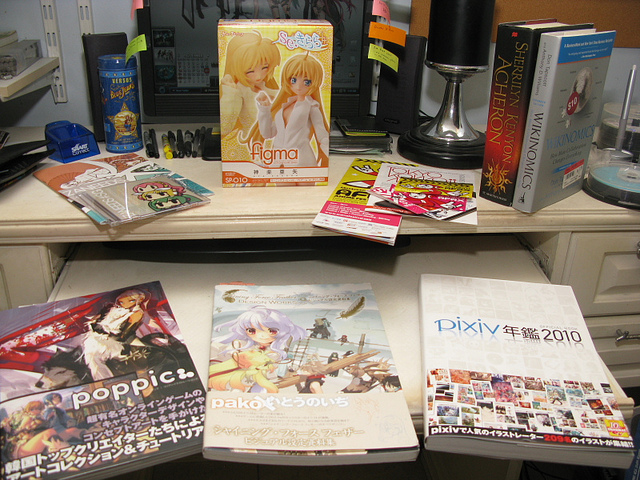 Its been a while since I’ve last posted in my own blog, two and a half months long to be exact. A lot of things came up between the time I’ve posted and today, and its been a week since I came back from Singapore. Had to work hard to get there and obtain the goods you see in the picture below. 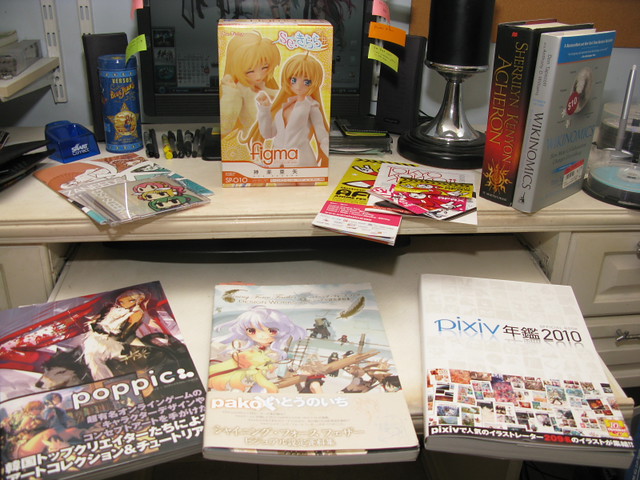 Originally, I went to Singapore for the sole purpose of going to AFA, but what happened was I spent loads of time experiencing shopping in Singapore instead of staying at AFA.I think the total time I’ve spent in AFA was just 4 hours or less, and thats on both Saturday and Sunday. But I did buy a few things in AFA since I really didn’t want to leave empty handed after spending 23sgd for tickets on both days. You can learn more about AFA at http://www.animefestival.asia/index.html 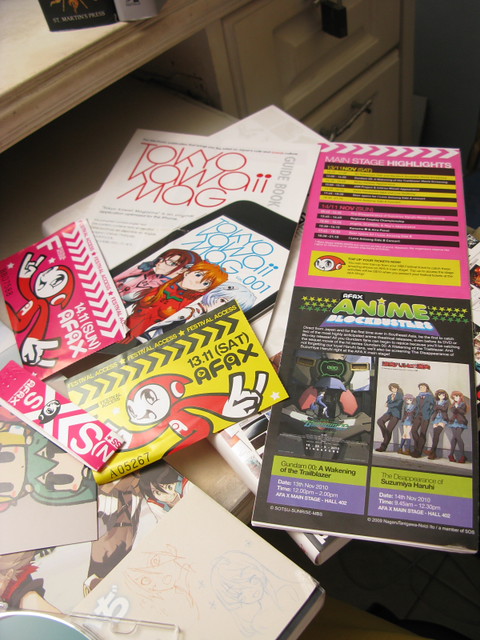 Someone gave me this brochure in one of the Booths in AFA. Makes me actually wonder if getting an iPhone or an iTouch will help me with my work (or in entertaining myself ^^) 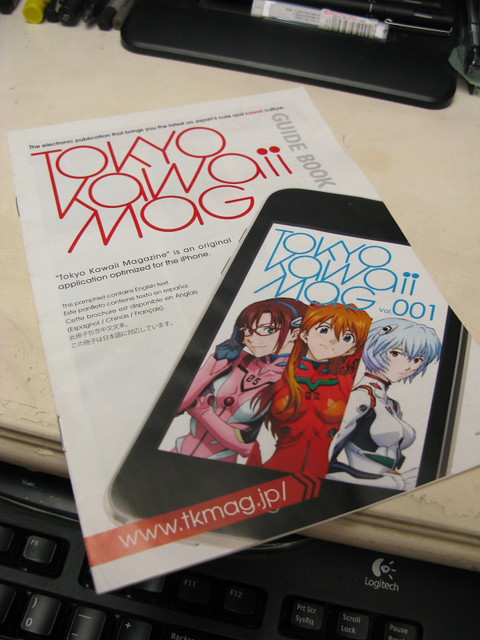 I traded Komikon, an event focusing on Filipino indie comics, for AFA so I was really glad to see that there was an artist section in the entire event. I bought a copy of Sen II ~Oriental~ in one of the booths for 8sgd. Sure it was expensive compared to most of the stuff sold in the Philippines, but the quality made up for it. 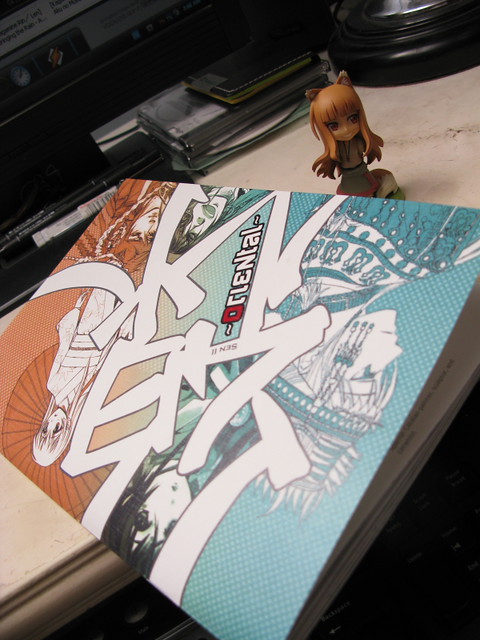 Sen II ~oriental~ is primarily a book full of black and white drawings, sort of like an indie artbook. The book seems to be focused on an oriental theme which explains the choice in clothing. One of the works here made by knight cat (knightcat.deviantart.com) reminded me of an old anime, Fushigi Yuugi. 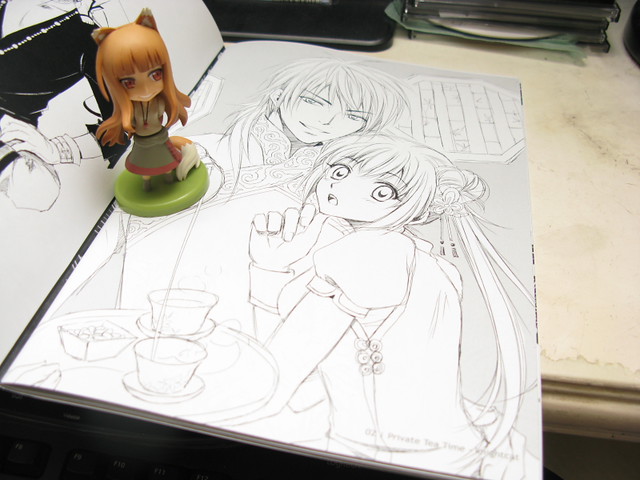 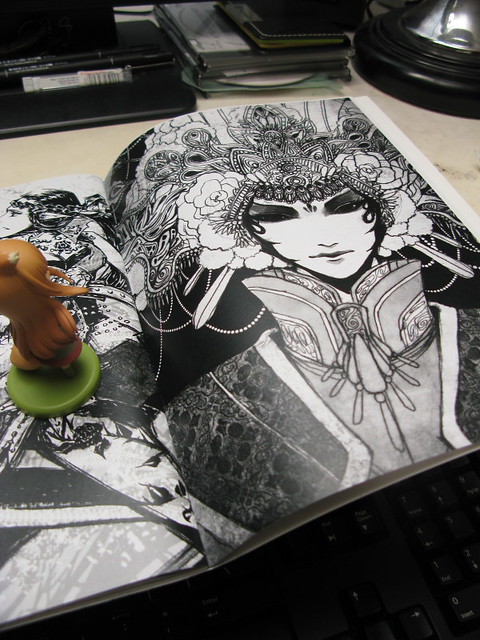 Finally, the piece that caught my attention the most in this book was made by kunisaki (kunisaki.deviantart.com). In case you may wondering about the figure, that’s “Horo” from the series ”Spice and Wolf”. I needed her to stay on top of the book while I took pictures because the book kept closing up by itself. A cute figure is better than a heavy rock ^^ 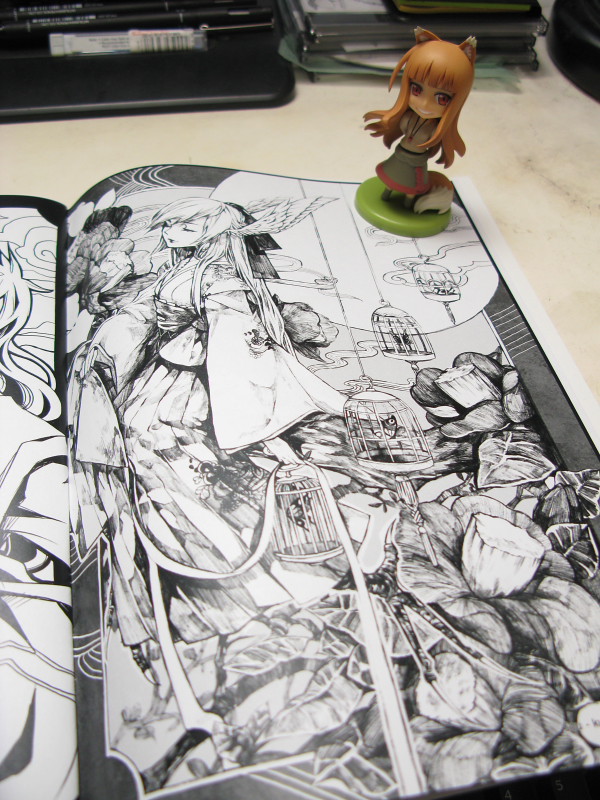 Luckily the book also had a 4 page manga about the Vocaloids Rin and Len, so I guess you could say my Komikon experience was transferred here. Interestingly, the book contained no dialogue whatsoever, which made the expressions and movement of the characters stand out even more. 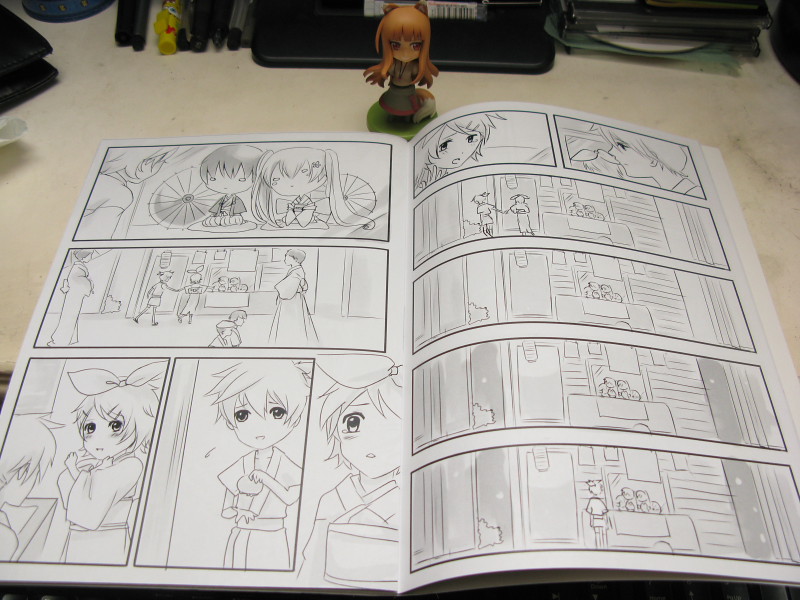 Speaking of Vocaloids, I also bought a copy of Zaneeds#SG. Luckily I got my copy for 10sgd instead of the 20sgd they charged. The CD had 7 tracks of Vocaloid music and I enjoyed “Overwrite” the most. 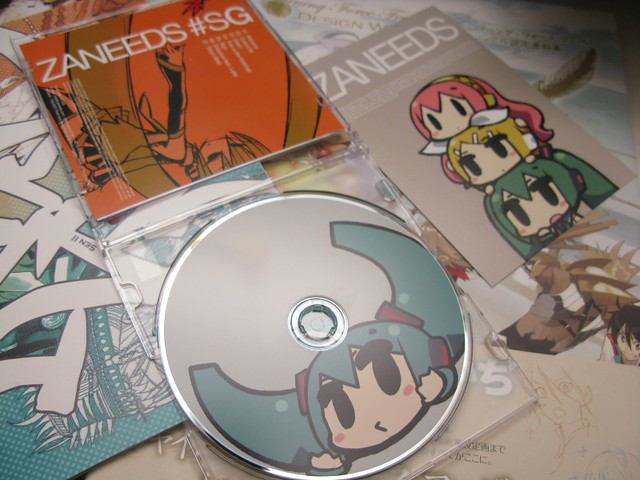 I wasn’t resist taking a picture of my Sega Prize Miku with the CD, since it felt very appropriate. I’d prolly get the upcoming Hatsune Miku Orchestra ver Nendoroid this January or the nendo version of Tooko Amana from Bungaku Shoujo this December for future pictures. Maybe I can use Tooko when doing some book reviews XD 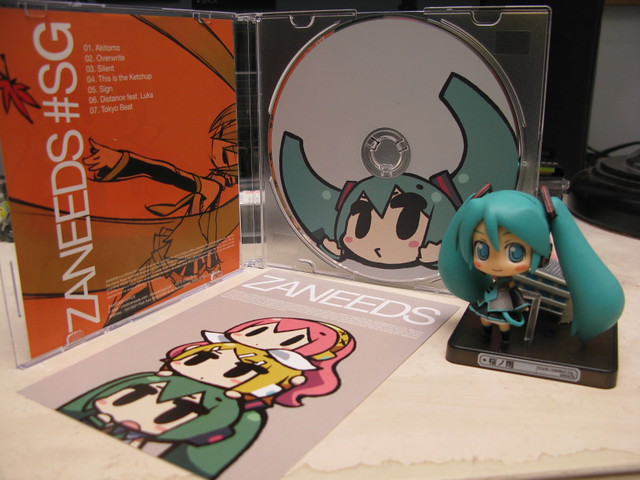 Borders had a sale right next to AFA so I decided to check it out and good thing too. If I bought these two books outside of the sale, I’d be spending 20sgd more so lucky me. Wikinomics was a good read and talked about the collaborative efforts happening all over the globe, which has been dictating some of the trends in a lot of industries. Once I’ve gotten a can of time I’ll start reading Acheron. Oh, both books are New York Times bestseller as well. 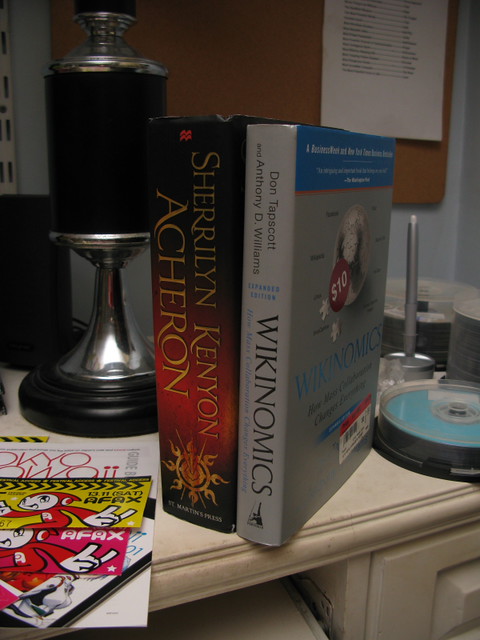 Went to Kinokuniya to buy some artbooks, will do a review on them later on. Hopefully I have the Tooko Nendoroid by then. 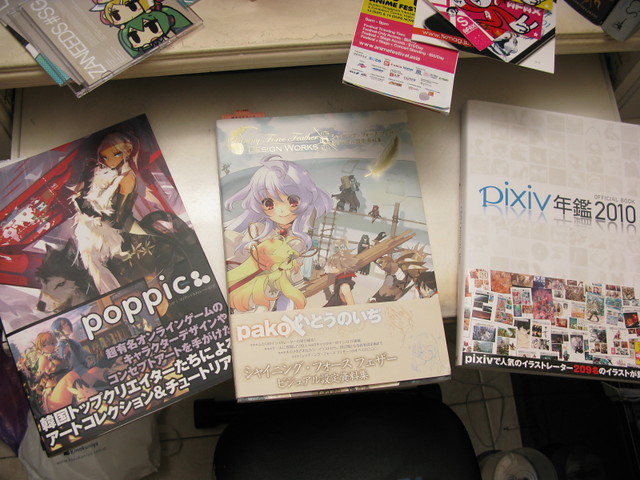 Funan Digital Life Mall had a shop called “Latendo” which had one of the figmas I’ve been looking for months. Incidentally, the figma came with the eroge where the figma character was based on called Se-kirara. I’ll start playing it once my Japanese reading skills have leveled up. 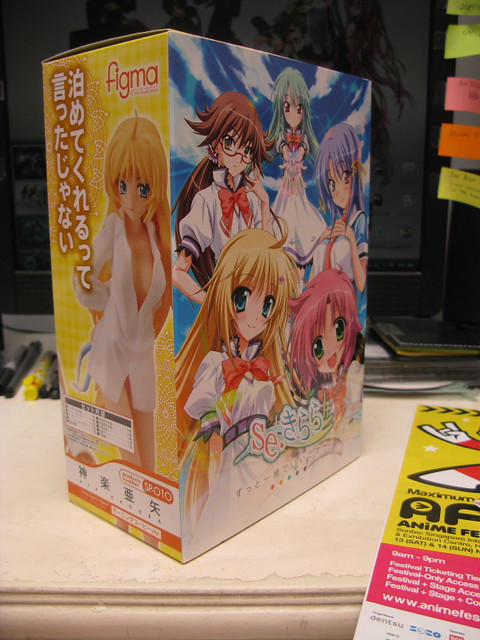 The Aya Kagura Morning Coffee ver is a limited edition figma, which comes with the game inside as well. I’ll do a review on the figure as well later on, and hopefully I’m inspired enough to write colorfully when the time comes. I’m still hunting down for the Fate/Extra Red Saber figma. Good Smile’s promotional strategy so far is to include limited edition figmas with games. The most recent ones were the To Aru Majutsu no Index game packaged with either a Misaka Mikoto figma or a Shirai Kuroko figma. Only a huge fan will buy two of the same game for the figure. 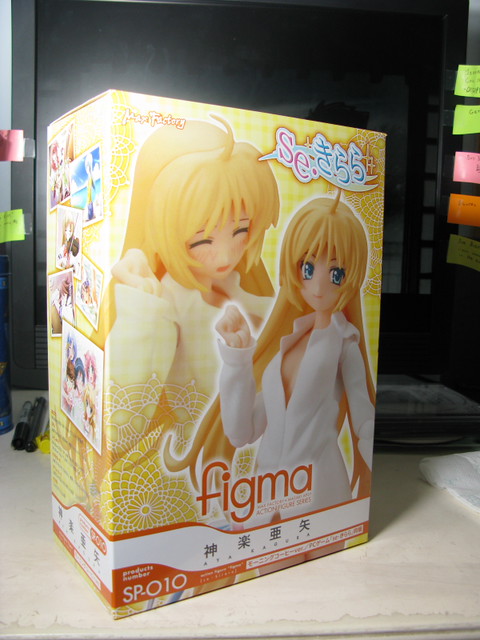 I’m currently also trying to learn some CSS on the side in order to make this blog site look better.  I hope I have enough time to do all the stuff I want to do.