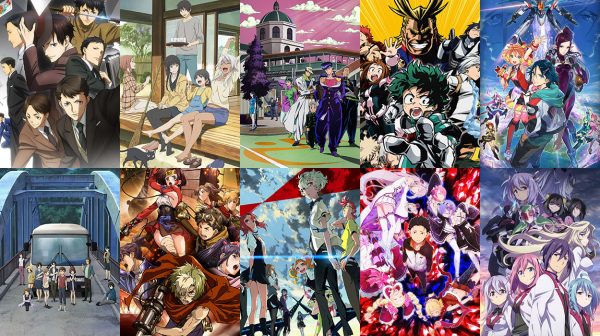 Since I watch anime, I thought maybe I should share some of the titles I’m watching this season. 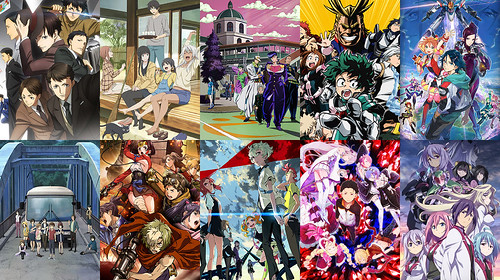 Normally the unspoken rule of the thumb when it comes to watching shows is the three-episode rule. Nowadays it’s either not interesting enough that I’d drop it by the first episode or it’s interesting enough for me to give it the 3E trial period.

Not everything is upto the third episode like Magi: Sinbad arc or Big Order, so it really remains to be seen if I even try them.

Joker Game – Spy themes are some of the thriller types that I love the most since not only do our protagonists (and even viewers) have to figure how to reach their goals, but also have to figure out if there is a spy also within their midst.

Flying Witch – Probably the only slice of life I’ve picked up this season. The plot is really more of everyday living in the countryside and the life of a young witch named Makoto. No magic showdowns nor save the world plot (so far) so this series’ slow, relaxing pace is a welcome breather.

Jojo’s Bizarre Adventure P4 – Jojo is just one of those battle titles instead of relying on power levels, it really is more or less brainwork that wins the day most of the time and pure manliness. The artstyle and the way some characters pose is always a treat and funny to watch.

Boku no Hero Academia – Stories of hardwork and being an underdog totally moves me, especially when it’s about people actually doing the right thing so this series really fits my viewing diet. I also love the music scores that go with certain heroic scenes too. Hopefully, this doesn’t turn into a generic shounen title.

Macross Delta – Honestly, I had a hard time swallowing the first episode. Dancing VFs, Idols, people infected with rage virus who instantly get cured after hearing a song is a bit too much. Then Ikenai Borderline played along with spectacular dogfights with the usual Itano missile circus. I’m very amused by that Walkure hand sign that the idols are doing all the time too if anything. It’s Macross, and it’s one of the titles I grew up knowing as a kid (even when it was known as Robotech) so to me it’s both a nostalgia trip (there’s a lot of referencing from past titles) and a mecha fan’s guaranteed series to watch.

Mayoiga – Reminds me of internet debates by keyboard warriors trapped in an isolated place where their lives are in danger. I’m honestly watching this to see who survives in the end and what’s happening in the village.

Kabaneri no Iron Fortress – Brought to you by the same production house, composer, director as Shingeki no Kyojin. This is basically a survival series about people living in a walled city who gets invaded by zombies (kabane) who are really hard to kill thanks to their steel hearts. Yes it does sound like Shingeki no Kyojin, down to the steampunk vibe. I find this series pretty interesting but I’m wary of it since it might be more on politics than on actual survival.

Kiznaiver – Feels like a social experiment in anime form. So far I’m not sensing any plot aside from the foreshadowing that they have to survive till summer vacation. They still haven’t revealed what the imminent threat is if there even was one… Despite the somewhat slow-paced plot, I love TRIGGER’s animation. Watching Tenga, Nico and co’s reactions is enough to keep me watching really.  Still keeping this in my watch list for Miwa Shirow’s character design (look at all those line weights) and some of their works like Kill la Kill and Gurren Lagann felt real slow in the first 3 to 4 episodes. The ending sequence is quite a treat for the eyes too.

Re Zero kara Hajimeru Isekai Seikatsu – Re-Zero is a ‘loop’. Our hero apparently can revive from a starting point when he died. Aside from that ability, he’s a completely normal guy who has to fight against (or in his case, survive) against a lot of odds. The thing with this kind of premise is that it needs to be exciting despite the repetition involved. So far, the plot hasn’t progressed so much, 3 episodes in and I feel like we’re done with only one chapter of a book.

Gakusen Toshi Asterisk – I found the first season to be a test of endurance more than relaxation. People who managed to sit this through will be more than happy to know that season 2 is a lot better and more exciting. Asterisk also has the best opening song this season too in my opinion and I’ve put the youtube PV on loop.

Overall, I felt last Winter 2016 had more titles which I preferred. Namely Heavy Object, Gundam: IBO, Grimgar, BokuMachi among others. If in case anyone wants to recommend me something feel free to place it in the comments section or PM me though Facebook or Twitter. I’ll try to check it out, I’m also curious how you guys decide what to watch every season too. ^^

Excuse my writing if it seems a bit lacking. Trying to get back into the groove ^^;;