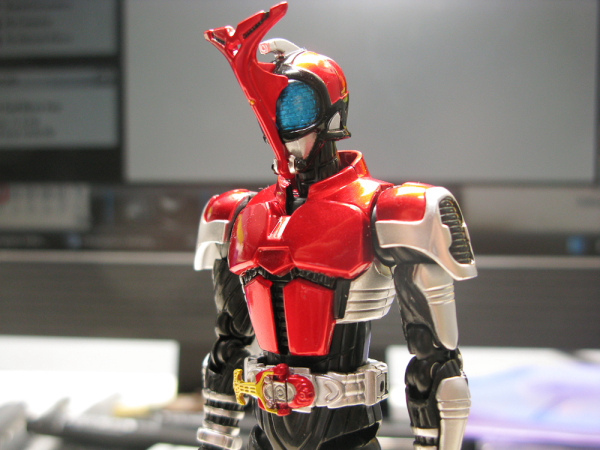 A good friend of mine gave me one of these for Christmas. He knows me very well for being a fan of the heisei era kamen rider (dunno if BLACK counts as heisei or showa). 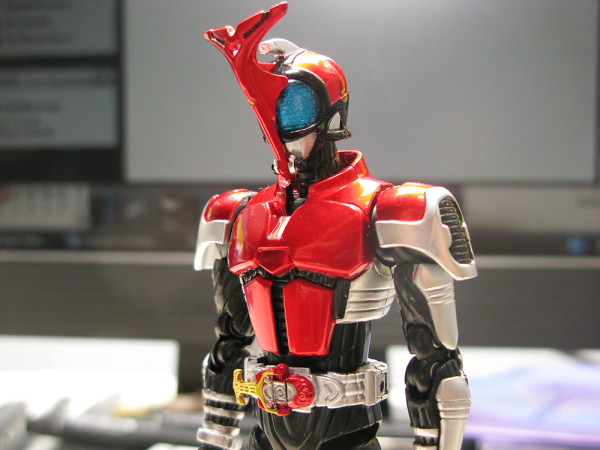 He was originally going to give me Kamen Rider W or Skull, but the stores didn’t have them both so he opted to give me his favorite kamen riderseries, Kabuto. ^^;; 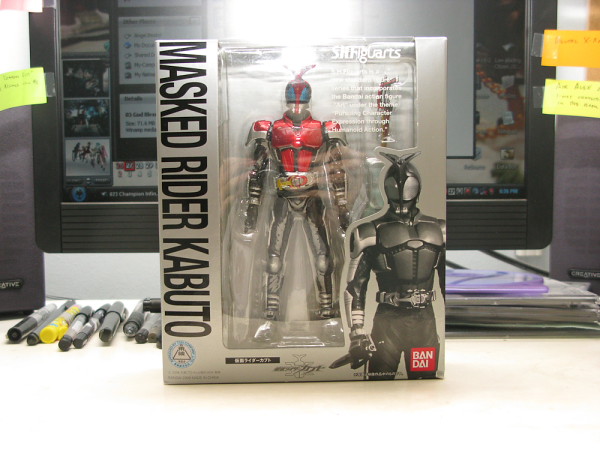 It was a good thing I woke up late, thus I wasn’t able to buy his gift, otherwise we’d end up buying the same gift for each other. This will be my first SHFiguarts in my collection, and I do recommend to start with Kabuto if you do ever try to watch any of the kamen rider series. I started out with Ryuki then Decade XD 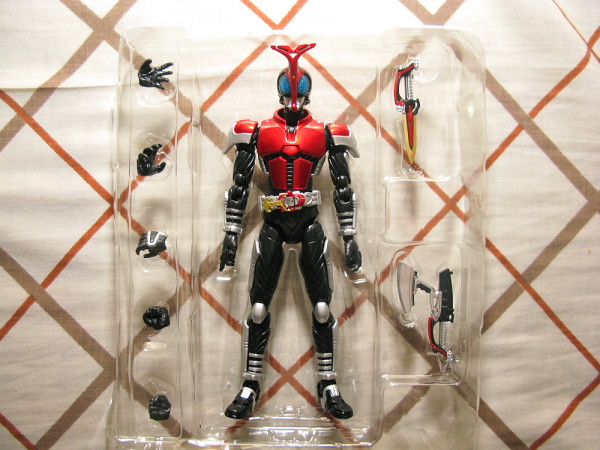 It. comes with 5 hands, and two versions of the kunai gun (the axe/gun and the kunai). The packaging is as simple as it comes, so nothing special really. What matters is the merchandise is protected. 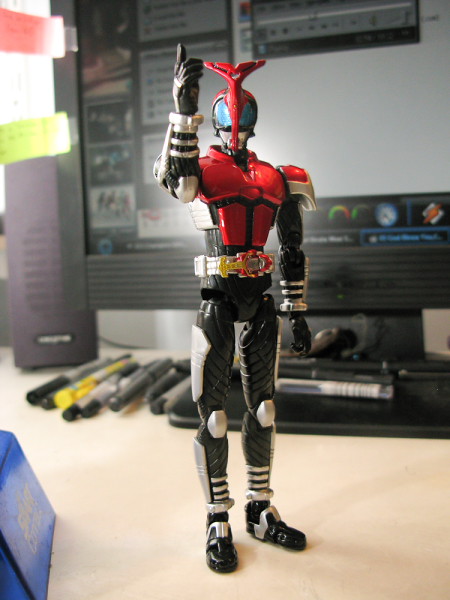 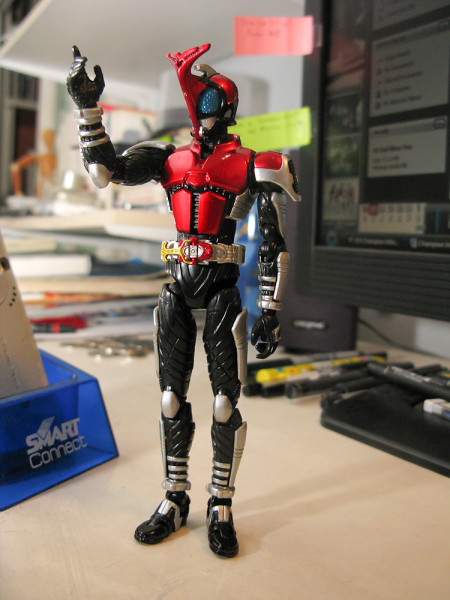 Decided to pose him doing his “walking the path of heaven” which happens to be how he poses when he introduces his name or when he talks about his grandma. SHFiguarts don’t usually come with stands like figmas so posing may be a challenge at times ^_^ 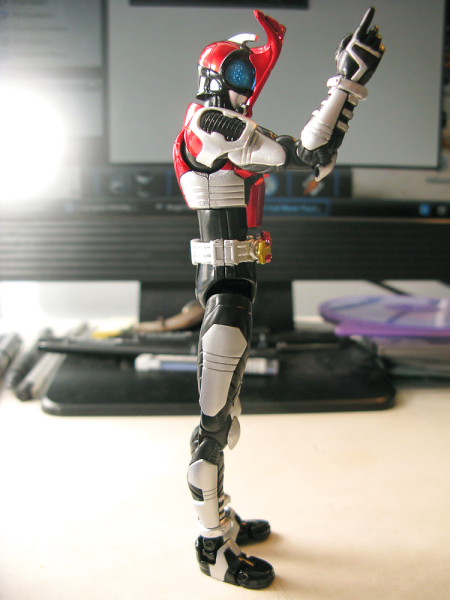 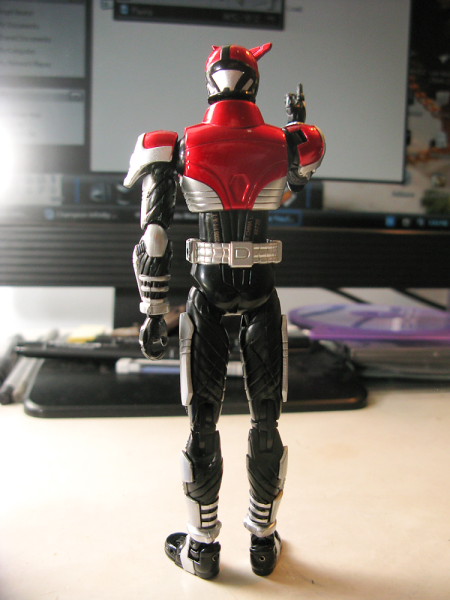 Even the back and the sides weren’t spared from having a great paint job. At this point, I was tempted to go back to childhood and play with him. XD 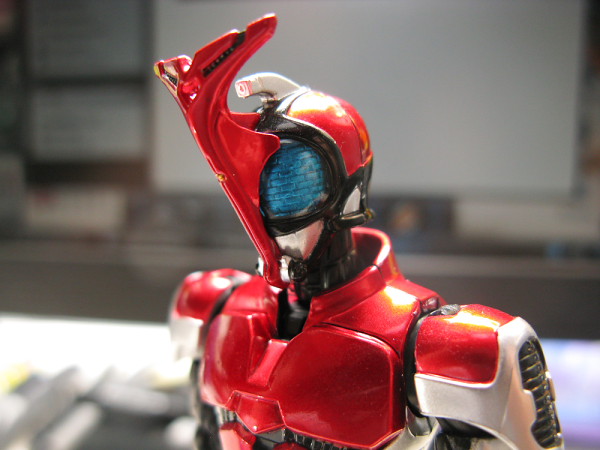 The eyes even had the tiny rectangular patterns it has just like the tv series. What astounded me even more was that the horn was very well made. It has the tiny orange gem in the middle and the vents on top. Lets get to every Rider’s key fashion accessory… 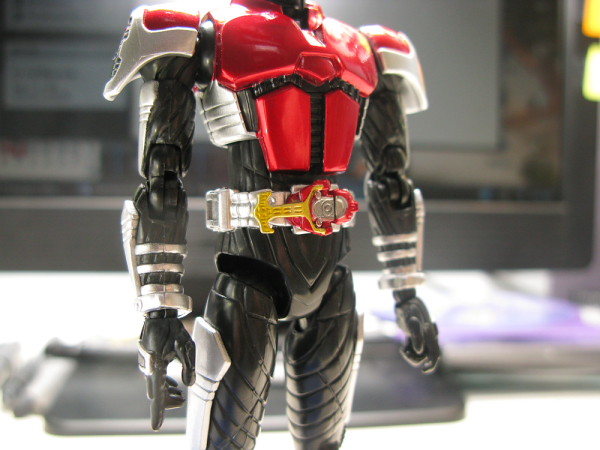 The Belt! Kabuto’s segmented belt seemed to be the first and last of that kind of belt, what followed before and after Kabuto were belts that looked like silver bands. 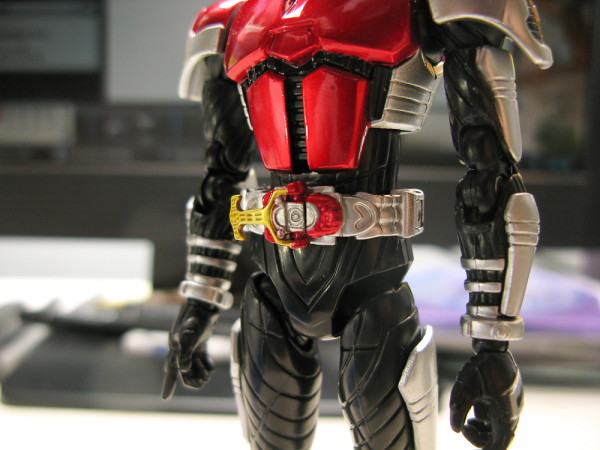 As for the buckle, which happens to be the transformation device in tandem with the belt, the detail given to it was pretty good. The only thing lacking is the announcer that does the countdown. 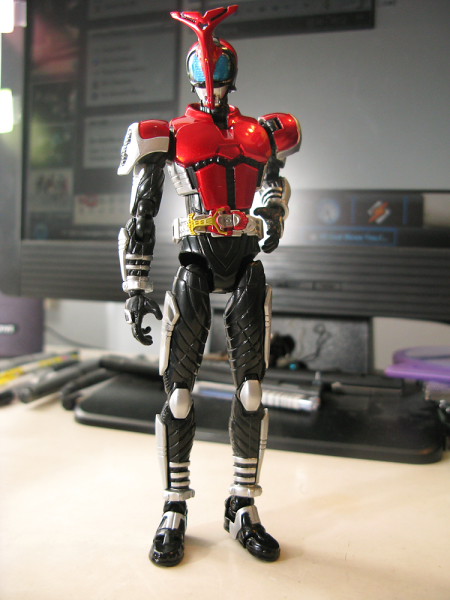 Clock-up pads can be found on both left and right sides of the belt, though it doesn’t stop time, it still looks cool. On the side where the hand is tapping the clock-up pad is a hole wherein you can place the Hyper Zecter which allows Kabuto to transform into his Hyper Form. 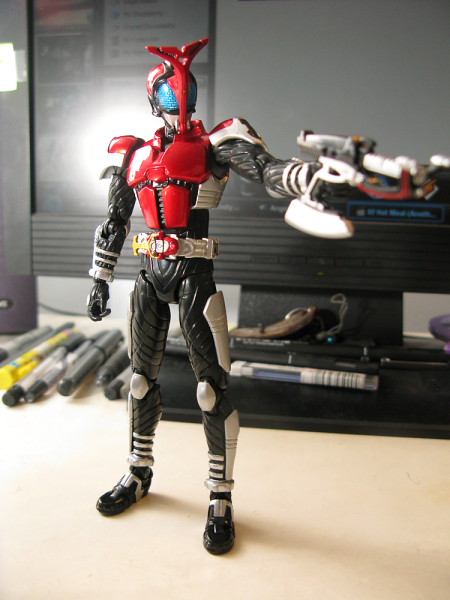 Kamen Rider Kabuto’s only weapon aside from his bare hands and feet is this spiffy looking gun that doubles as other weapons too. 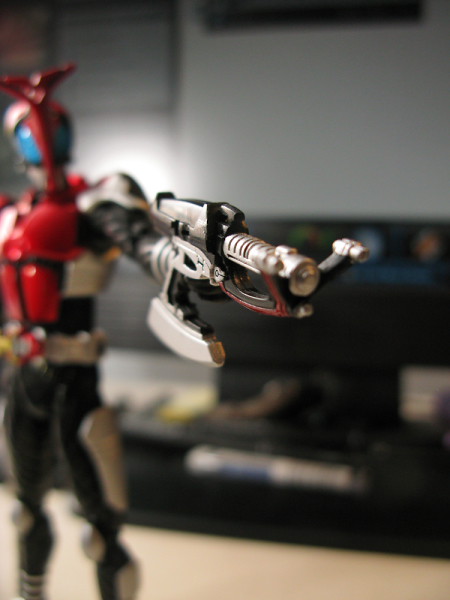 Even something as small as the Kunai Gun was given much thought as you can see with the paint and detail done here. 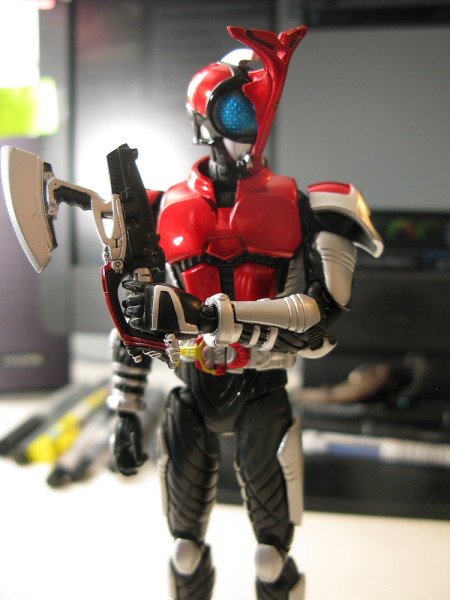 The gun also doubles as an Axe also and… 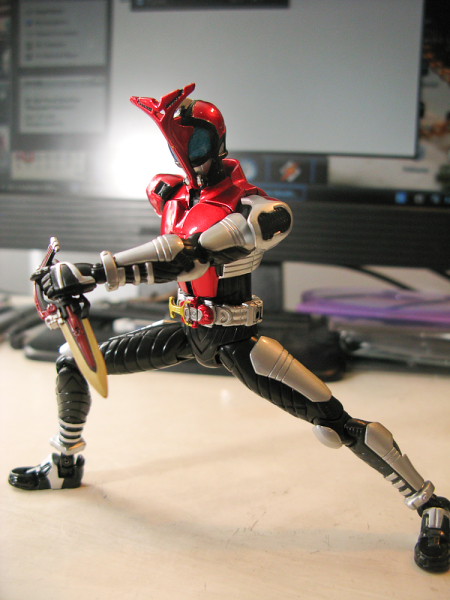 It also functions as a kunai when you remove the axe-head from the gun. 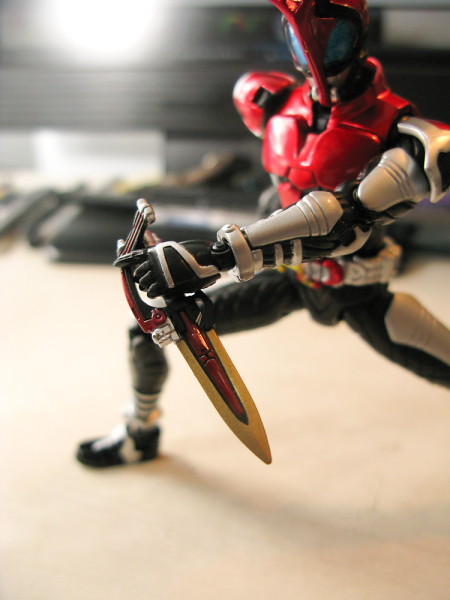 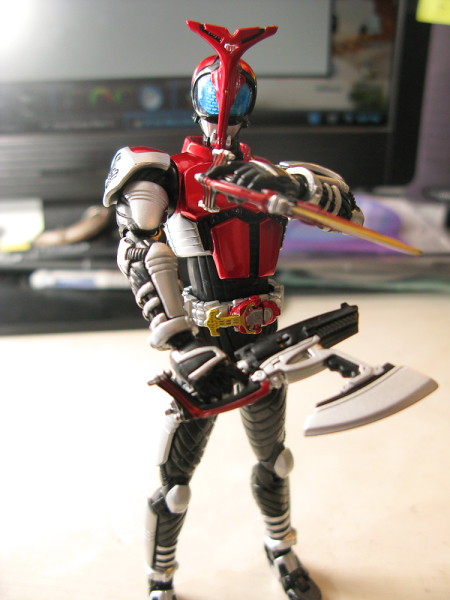 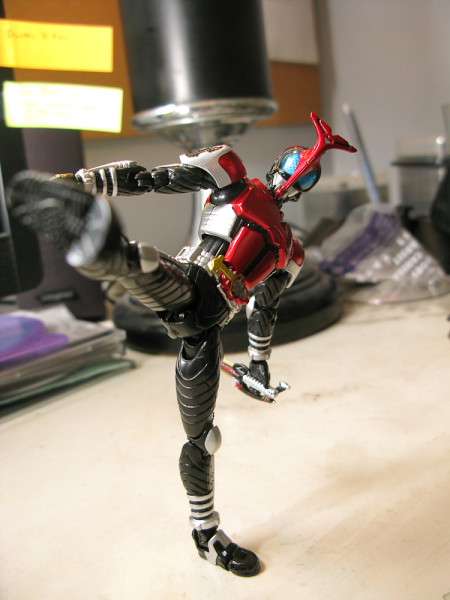 What Kamen Rider will be without a Rider Kick, so this is what it looks like to be in the receiving end. 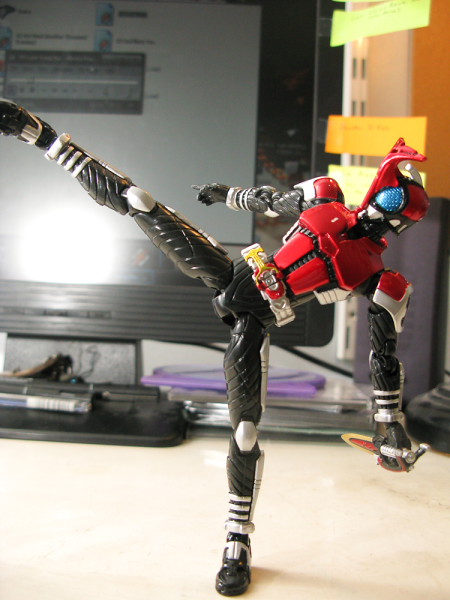 Though he does the traditional flying kick, Kabuto makes it look flashier by doing a rider kick in the form of a counter attack roundhouse kick. Are there any other Kamen Rider that does a roundhouse kick as well?