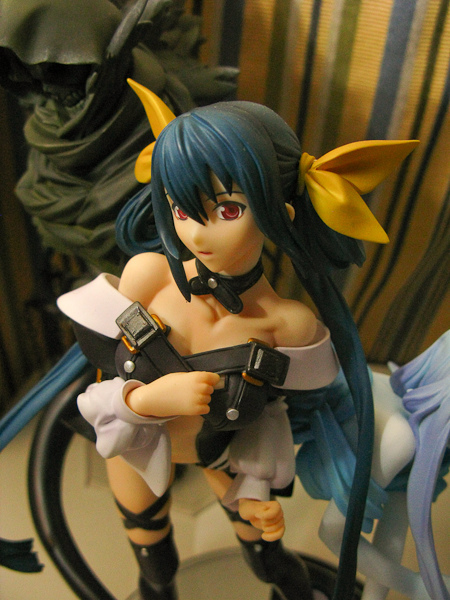 I actually thought of posting only 7 pictures as a blog entry (just the Noel puchi), but that’s pretty unbecoming of me. I’ve always loved the extent and depth placed in the character designs of most of ArkSys fighting games such as their famous works Guilty Gear and Blazblue. It is by no surprise that there will be sculptors, professional and amateur alike, who would try to give their favorite characters (often times the female ones XD) the figure treatment. Oh yeah, only the first 8 pictures belong to me, the rest i nabbed them from Google-san XD Starting first with Noel Vermillion from Blazblue who was recreated through Good Smile’s Nendoroid Puchi line. You can get these figures by buying a limited edition of the japanese version of Blazblue Continuum Shift. Sadly the limited edition has long been sold out and finding this figure now takes a lot of time. Props to Pete for allowing me pics here. The only thing lacking with this nendoroid are her twin guns, but hey can’t win em all. Now if only they came up with a nendoroid Rachel or a figma version of the characters. Come to think of it, why hasn’t anyone tried to make more figures (articulated and non articulated) of the fighting game genre? A lot of collectors play fighting games and a lot of players also appreciate and collect some figures at some point. C’mon Planning department, give us more! My biggest complain, despite being a limited edition is that you can hardly do any pose with this figure from the nendoroid puchi line. You can at most adjust the head or rotate the arms, but that’s it DX. It’s a merchandise that keeps you wanting for more D= Now this is more like it! The Alter version of Dizzy, from Guilty Gear,  is so stunning that I have to plan out properly my review for it because I intend to use an awesome backdrop for it! That’s how much I appreciate this figure! Been waiting for probably two years for this figure to come out! Another month or two before an abnormally comprehensive review to come out for this figure will do, as long as everything will do justice to it. One of the things that makes the Alter version superior to from the Kotobukiya version below is the detail on the wings of Dizzy. You can see Necro and Undine forming out of them. Speaking of Dizzy, Kotobukiya came out with this nice moe looking Dizzy wherein you can either opt to buy the black version or hunt down a white version of her. I love her white costume the most, but I guess the default color (the black) has a certain allure of danger in it. This one was recently open for preorder and as much as I like Makoto (I main her in BB) I’d steer away from this version from Freeing. Reason being is that it doesn’t feel animated enough. Her pose is boring, the base is boring, nothing about the figure strikes me at all! The sculptors could’ve done Makoto doing a lightning arrow complete with effects on the ground (for the base) or even the last hit from her Particle flare would do. But noooo, the sculptors decided to go lazy and just go with the thought that “Makoto fans will buy this because its Makoto”. What’s worse is, if no one buys this, it might come across to the Planners as “the genre will not sell” instead of “the figure did not sell because it sucked!”The figure is cute, but it could’ve been more! Another prime example of “whatever works” sculpting. This standing B of Rachel did not communicate any of the character’s charm nor did it scream “I will take your money because I’m awesome” like how Alter Dizzy did. Ok, this character comes across to me as a sado-ojousama type who happens to be a vampire who can control lightning and wind, who also happens to have a cat who can be her umbrella or chair and an imp whom she loves to abuse. Saw any of those factors taken advantage of? Sculptors could’ve just made her losing pose with a wry smile or just simply making her look like she flies. Or they couldv’e worked hand in hand with an illustrator or something XD Garage kits on the other hand have so much love poured in them as you can see in this Noel, the pose says it all. She’s fast, she’s light and she uses guns (lol). I can’t say anything more because it’s basically done right, compared to the ones made by Freeing. I have to admit that the figure quality needs a lot of work (especially the face XD) but for the most part, the figure didn’t look as boring as the first two from Freeing.