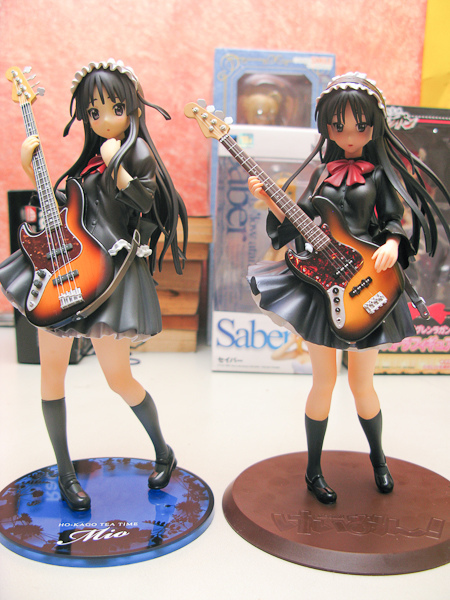 Haven’t done a figure review in a long time, so lets go with two figures at the same time of Akiyama Mio ^^ 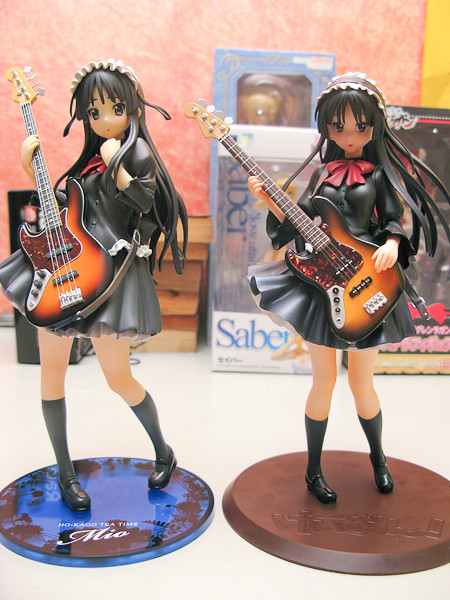 Ok, maybe this is a bit cheating since its almost the same figure with a few differences here and there. But hey, nobody gets the chance to review two figures that are almost the same right? I really don’t know what these two figure companies were thinking when they made they decided to make these figures. Were they targeting different markets, those who want a “cool Mio” (Uplark) and an “embarrassed Mio” (Alter) I wonder how Mio fans felt about this XD

For the Uplark Review, I’ll only cover Mio with her “embarrased” face not the one with her smiley face. 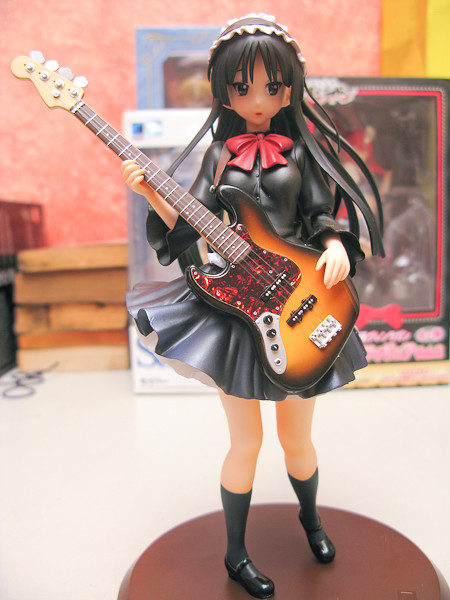 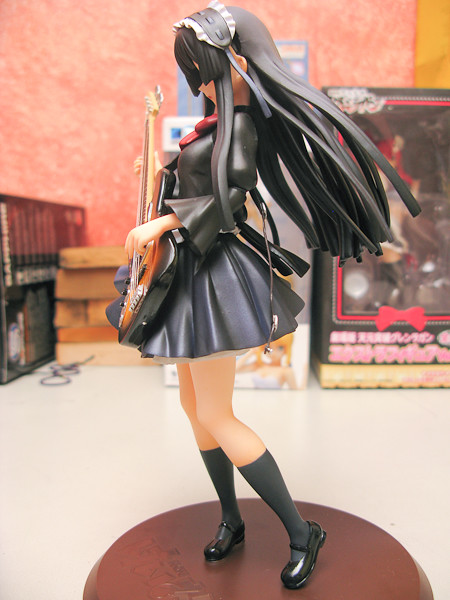 Lets go with the Cool Akiyama Mio first from Uplark. Our bassist’s poses while she is playing her bass guitar, but to be honest I have never found anything interesting with this pose of hers. I mean there is movement, but the biggest attraction of this character is her personality, and to be honest I don’t see that here. 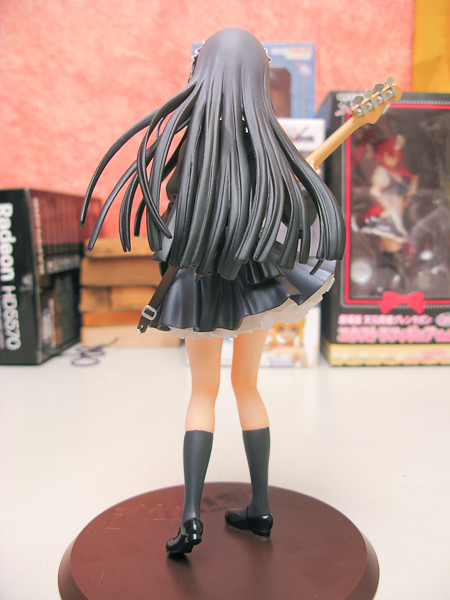 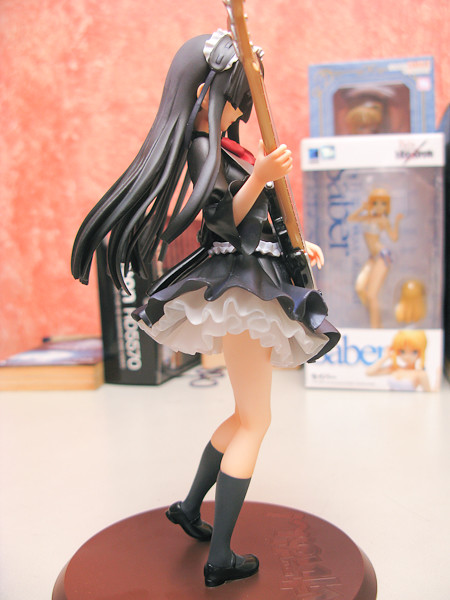 Despite sounding like that, I’m not being biased here because I’m not a Mio fan mind you, nor a fan of K-On!!. I honestly like the slimmer legs that this Mio has though. 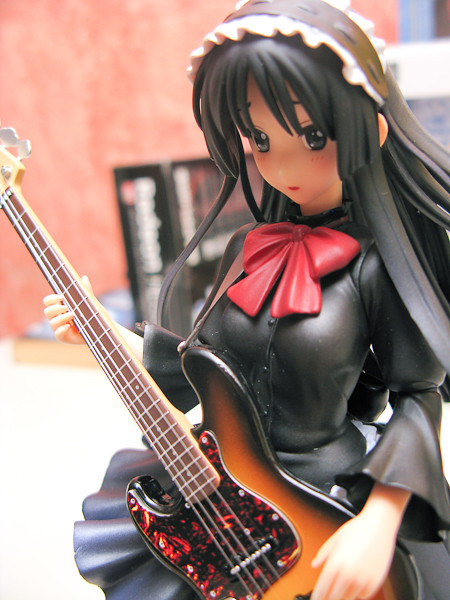 Upon closer look, you’ll realized that she’s somewhat embarrassed which kind of made me confused. If you look at her from the front, it looks like she’s confident and cool. But on a different angle, she’s blushing. Multi-purpose figure? XD 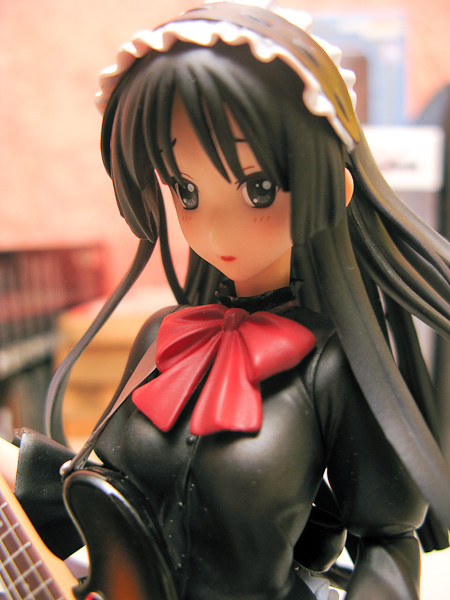 Here have an embarrassed Mio. I still love the way they did her face though. I’m not really a fan of characters that look too Moe XD 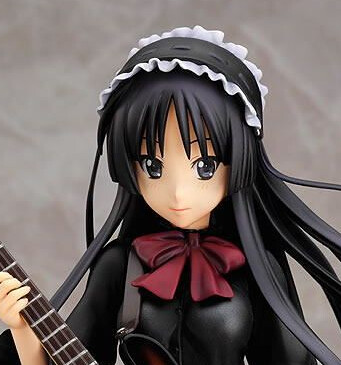 There is also an extra smiling face that you can swap with, which actually fits her body language I think. But everyone still loves the cool/embarassed face this Mio has. 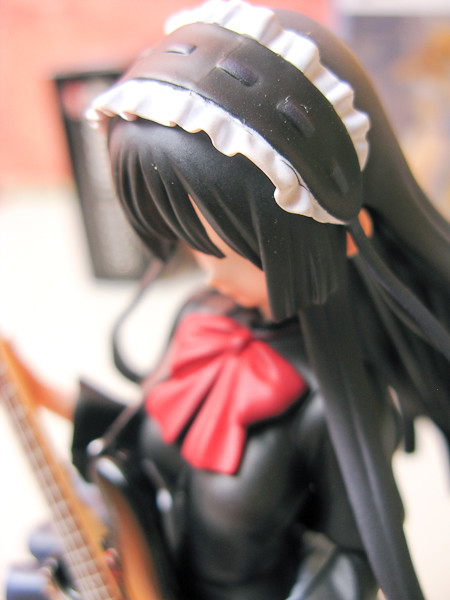 So much for quality control. Aside from that, I wish they made do with clear plastic like what GSC used for Nendoroid Totori XD 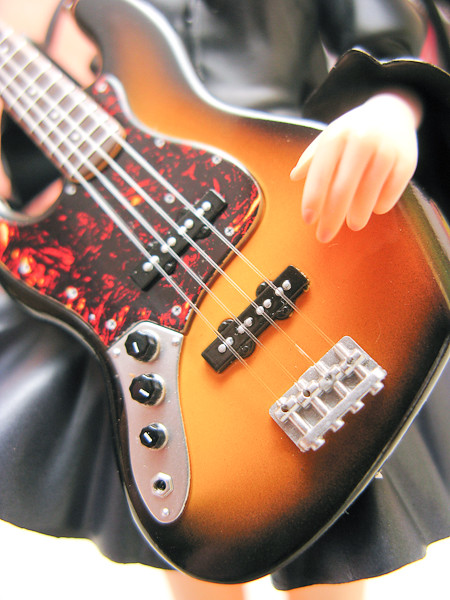 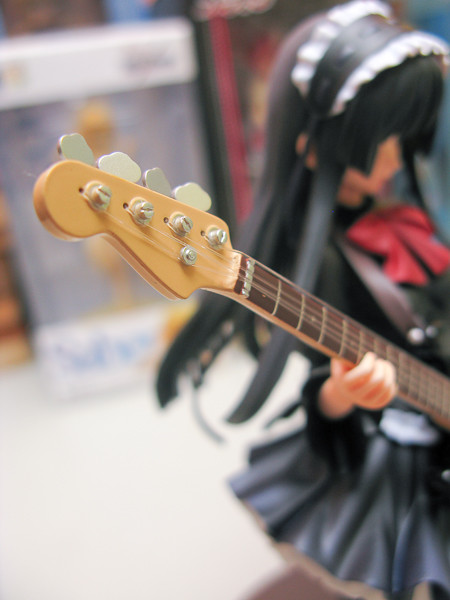 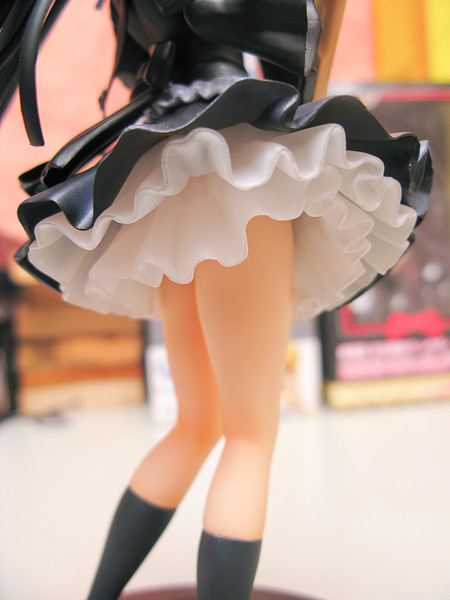 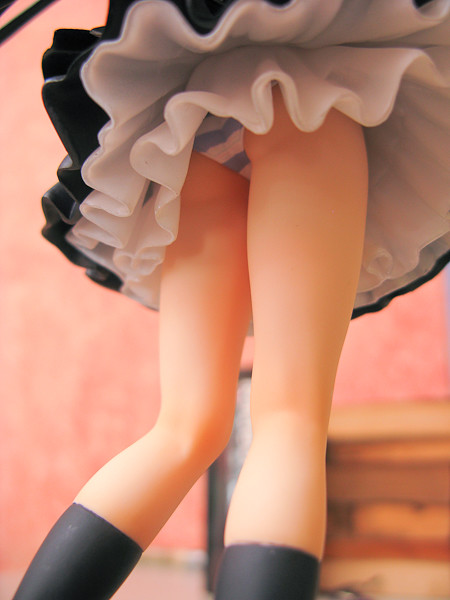 Fanservice shot! Hey they got it right unlike most Miku figures (was Miku’s shimapan a fan-made item or was it really intended by Crypton to be a shimapan?). Oh yeah the skirt (lol forgot), nothing really special about the way it flows since its hidden under hear black top. 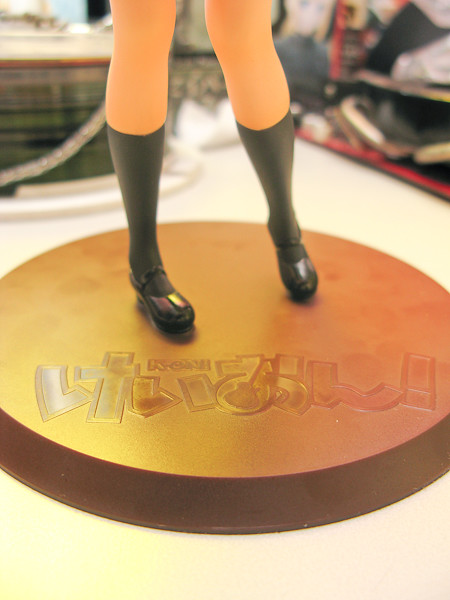 Rage inducing stand. Can they get lazier than this? I believe you can save an almost crappy figure with an awesome base! And it doesn’t even look like it’s a wooden floor lol. 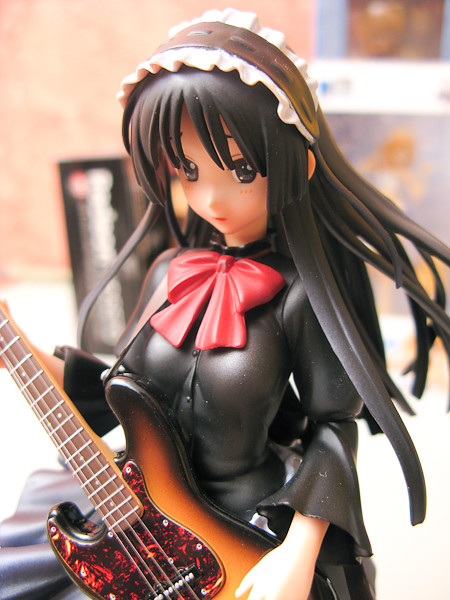 On  weird note, If you look at her a bit from above, it looks like she’s pouting or showing some sad face. Multi-expression figure XD 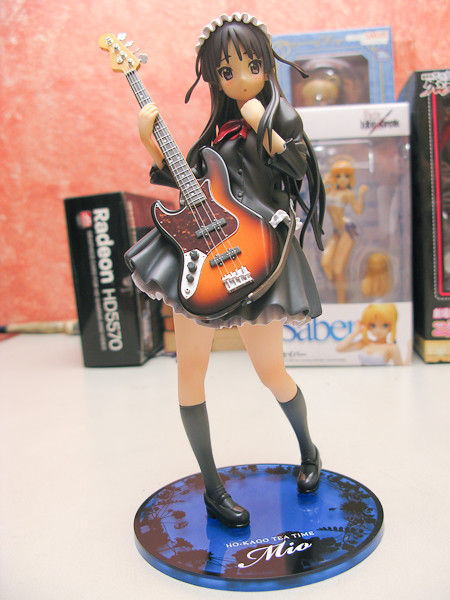 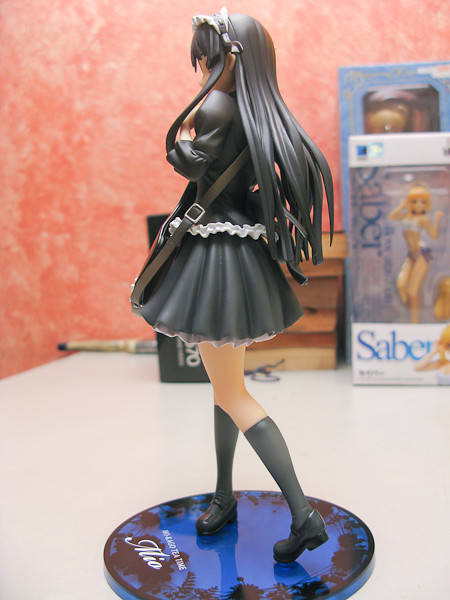 Moving onto our “embarrassed Mio” from (company name here). I honestly prefer this one over the one made by uplark because this captures the character best. Mio is supposed to be shy on stage. Love the way she’s holding her bass guitar as well, it adds something different to it. 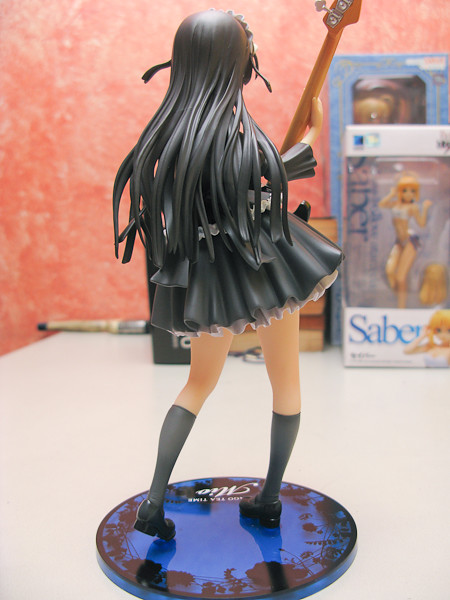 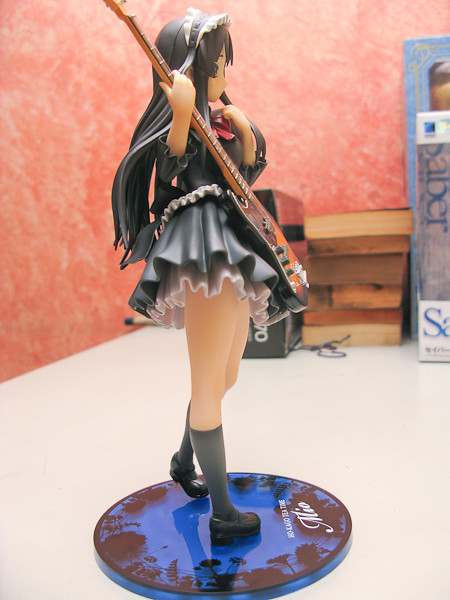 The hair actually feels more lively here with some strands of her hair being on top of the other. Lol high school thighs XD 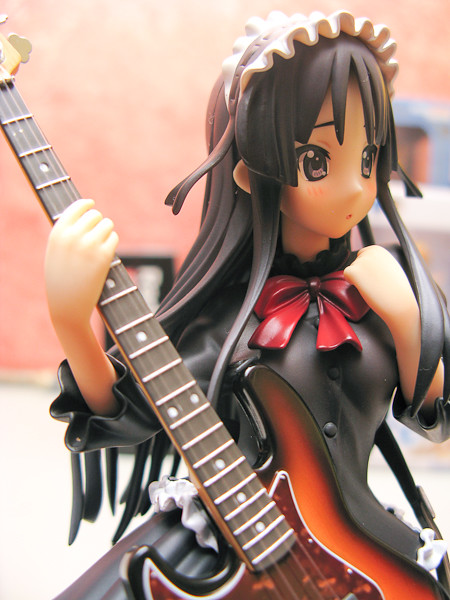 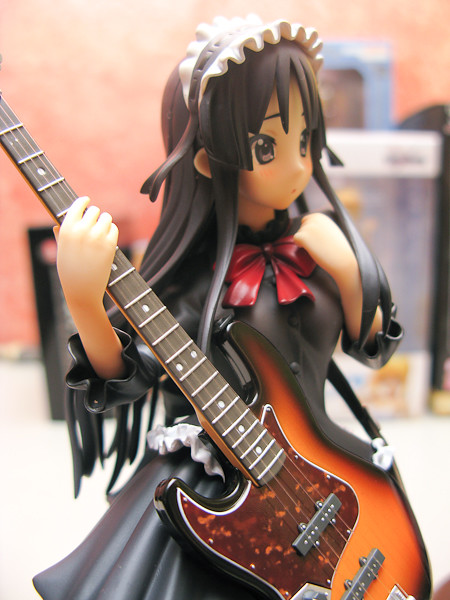 Love how shiny the ribbon is as well. Don’t you just love Mio when she’s flustered XD 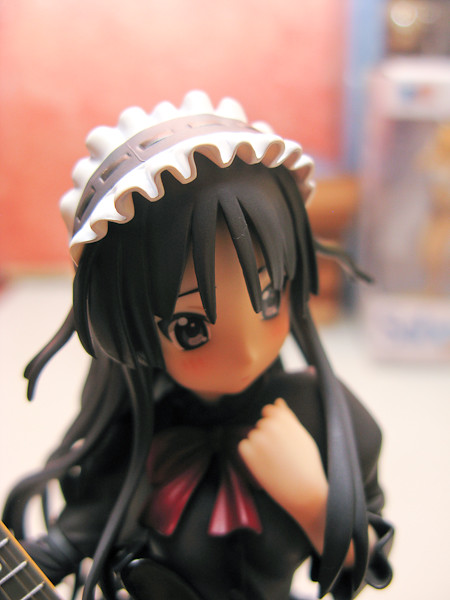 And her headgear is better made than the other one as well. 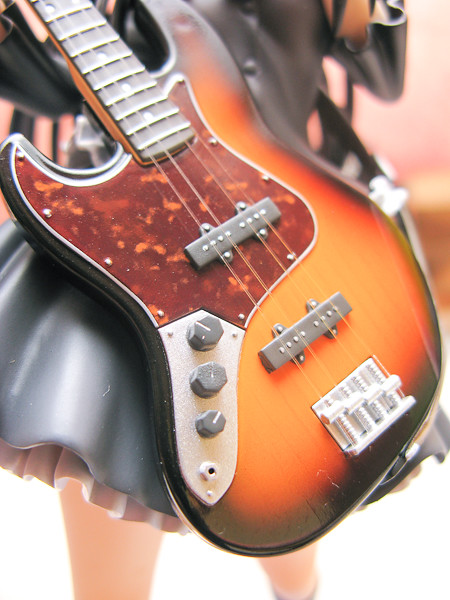 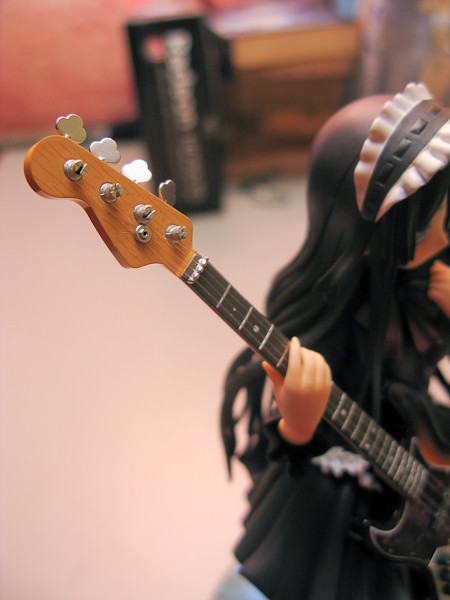 Remember the comment I had about the head portion not looking like wood enough with the other figure? Well this figure did it right =P 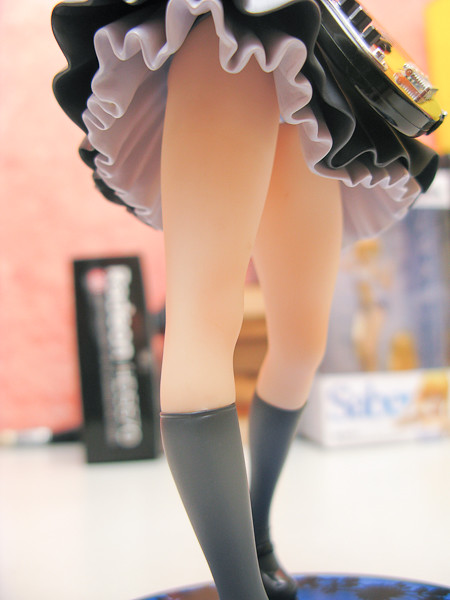 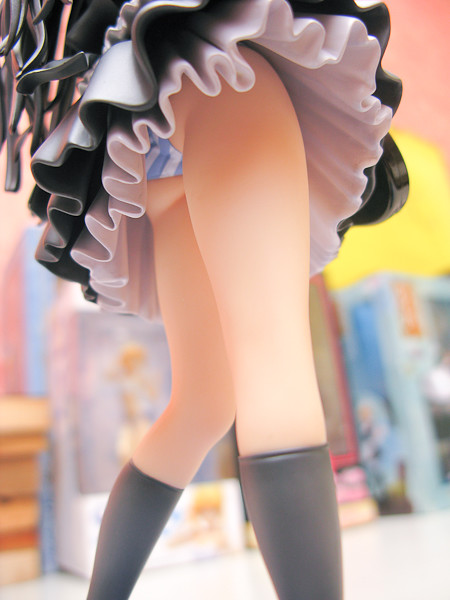 Again accurate as always, skirt also wasn’t that special. But the legs here are shapelier than the other one. Maybe its because of her “butt lines” there which add some sense of depth. XD 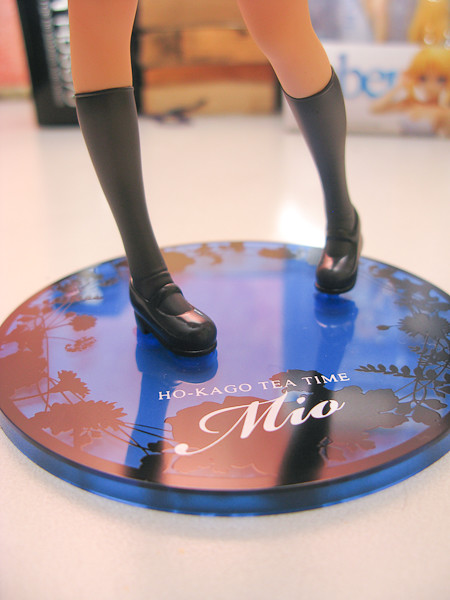 Ok the base is still boring as a plate, but its way better than the plain looking one right beside her XD 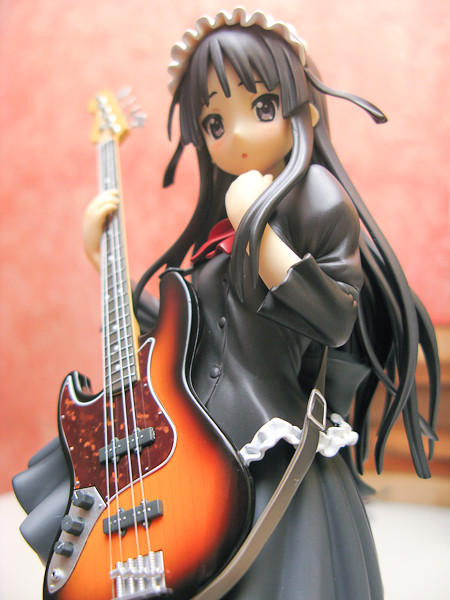 This is probably the best angle to take pics of this figure as it makes her facial expression stand out even more along with her body movement.

I honestly still prefer the first one just for the face, but the rest were just major turnoffs. Is there a way to transfer her head to the other one without making it disproportional? XD Oh yeah, I’d like to thank my friend Pete for allowing me to take pics from his figure collection. He also allowed me to cast off his Airi from Griffon. I’m tempted to cover it in the blog, but it’s NSFW material XD

In case you guys want to tag me up in twitter, just add me up here. I’ll prolly update my “about me” page and explain how I got my nick name there.

Blazblue Figures, Arksys Figures and some Ranting
Scroll to top