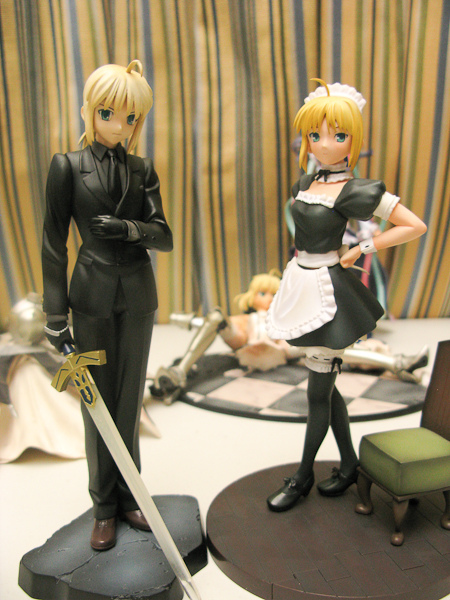 Yes that’s plural. Decided to review two figures at the same time because I saw these figures and I was reminded of a maid and butler café. 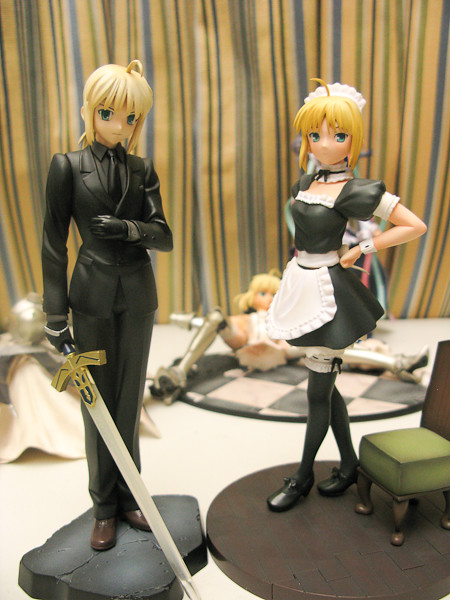 To those who are unfamiliar with the series, no they’re not twins. Those two figures are from Type-Moon’s Fate Series. To the left we have Saber in her bodyguard attire which you’ll see in Fate/Zero, while to the right we have Saber’s maid costume found in Fate/Hollow Ataraxia. 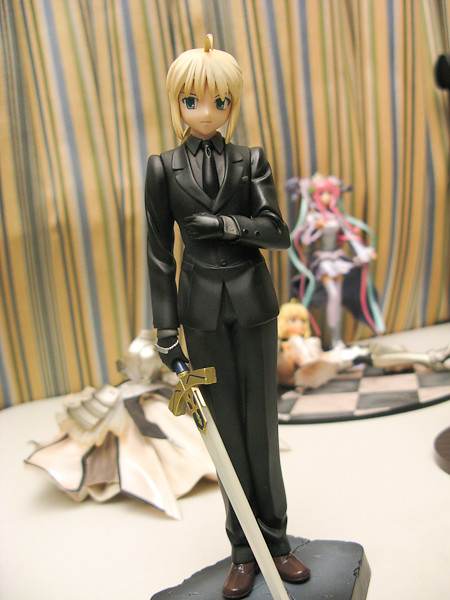 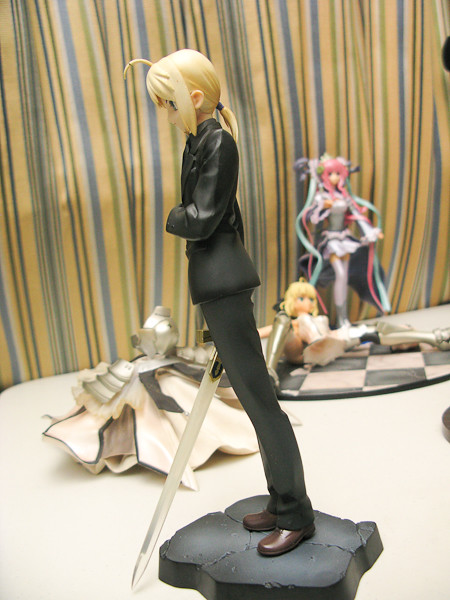 This figure was made by Kotobukiya and it really seemed like it was drawn by Takeuchi’s hand. I actually had to redo the shoot twice because I found out there were a lot of white dust all over Saber, its as if Saber has dandruff problems XD 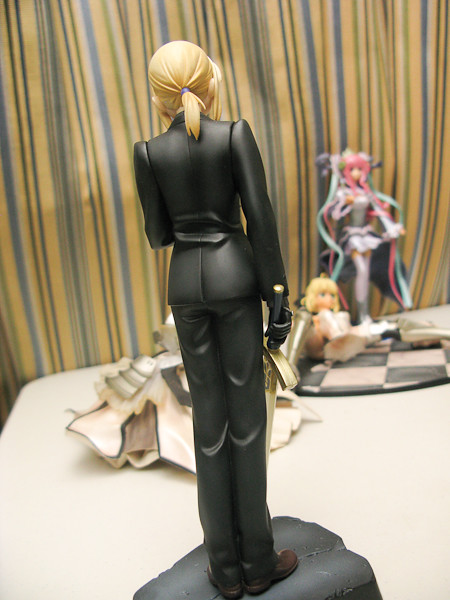 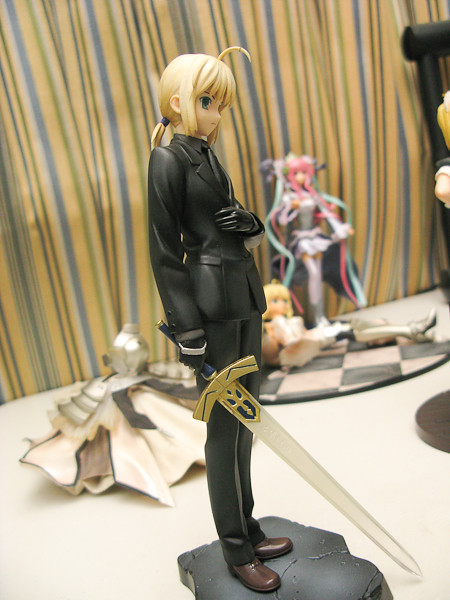 I’ll be perfectly honest, I’m not into figures that try to look imposing by standing and staring intently at you. I find them boring. 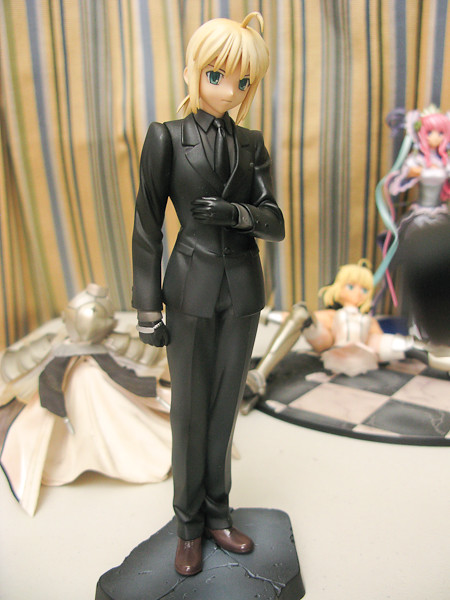 She reminds me a lot of Konoe from Mayo Chiki. Must be because of the cross dressing portions. Just so you guys know, Saber won’t be having any girly portions in Fate/Zero at all XD (except maybe for her second to the last fight in the entire series). 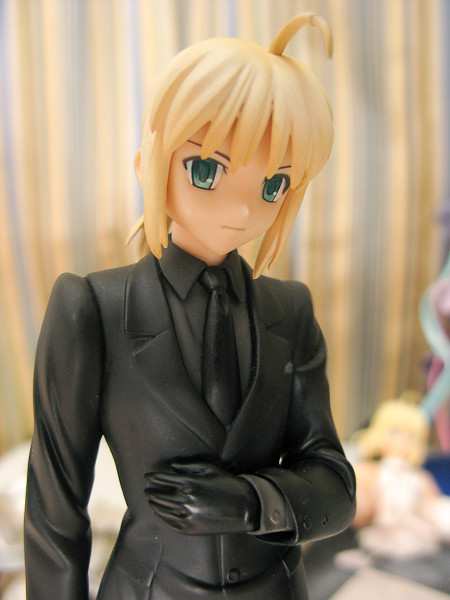 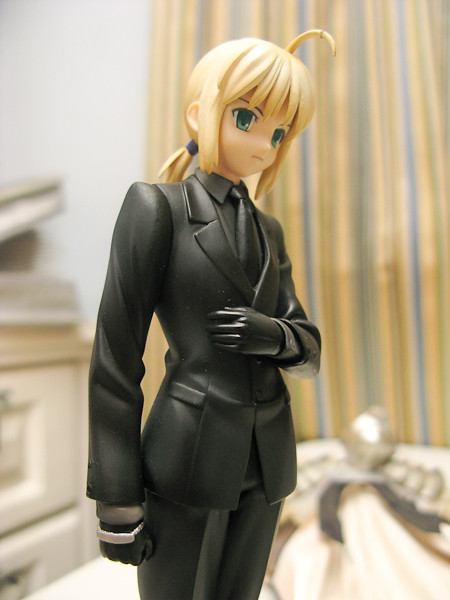 See what I meant by staring intently? If you’ll notice the ahoge kinda broke off and my friend had to connect it back. Ahoges are apparently the most vulnerable part of any figure. How do you guys take care of your figure’s ahoge? 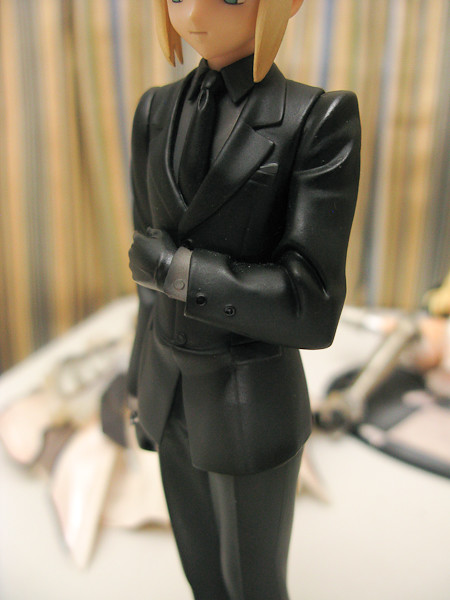 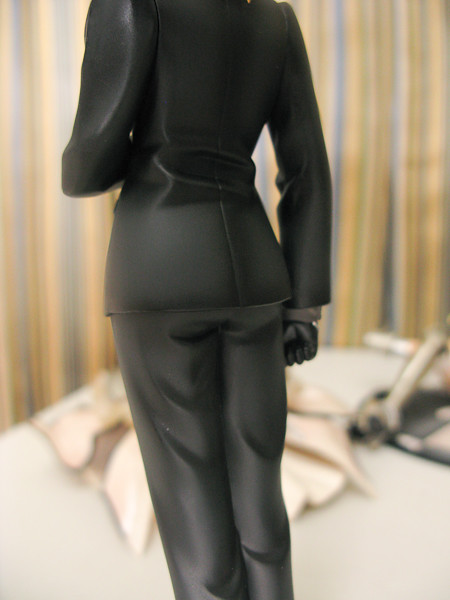 Still some white specks over there. Saber can totally pass off as a guy or even a VIP of sorts with this suit. 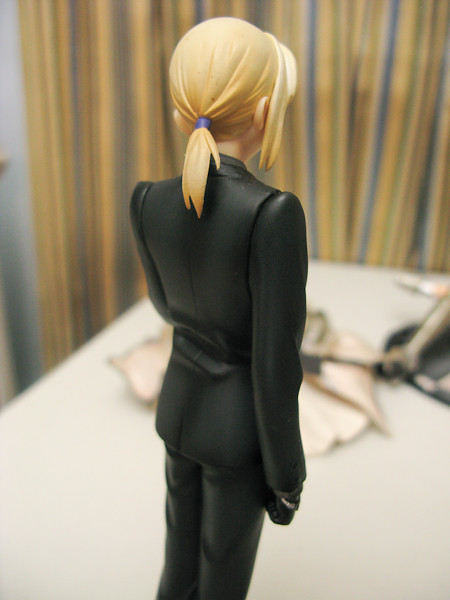 Hmmm I prefer Saber Lily’s ponytail than this one. 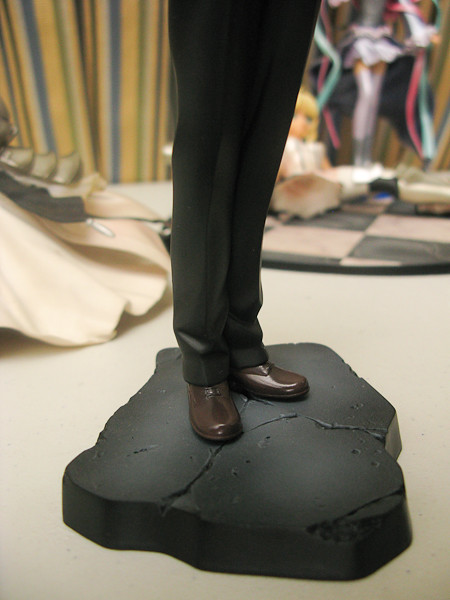 Base isn’t as boring. Oh, if you have the Kiritsugu figure you can actually connect both figures together. To be honest the Kiritsugi figure is way more interesting than this one. Can’t wait for GSC’s scaled figure complete with that bike! 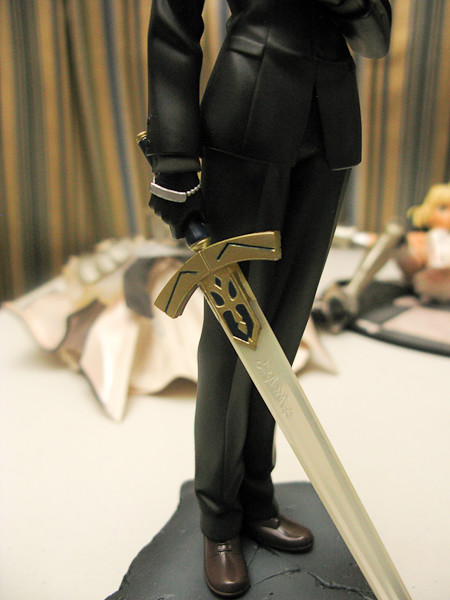 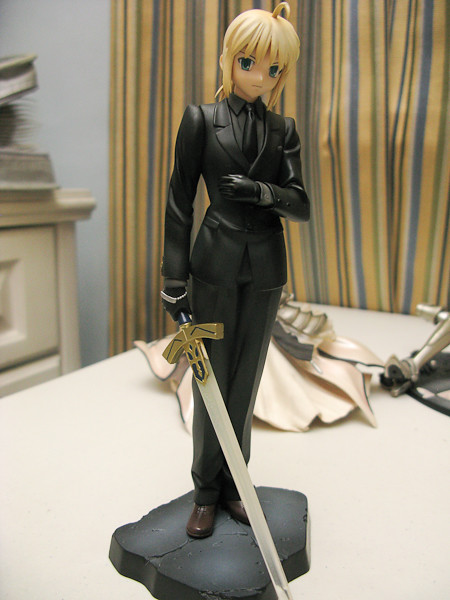 Her hand is detachable and you can replace it with a the hand that can hold Excalibur. Strange coincidence that GSC has decided to go with a translucent Excalibur just like this one for their figma. XD 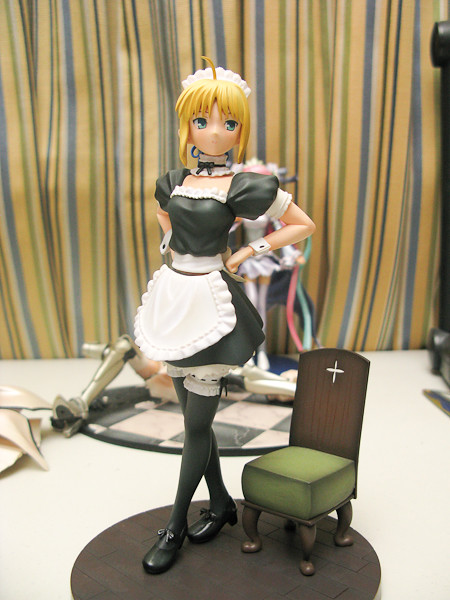 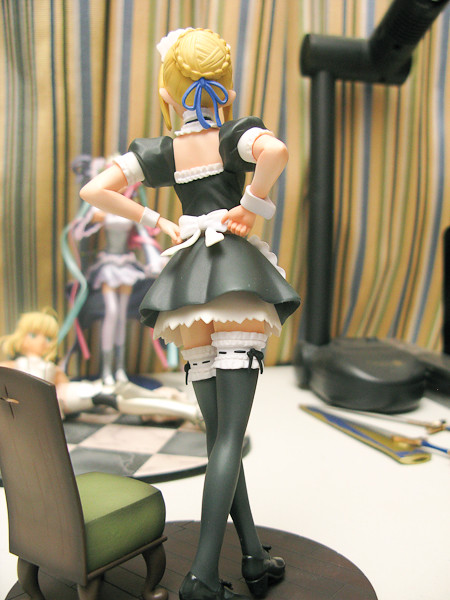 Time for some maid Saber now. I do hope that Type-Moon animates Heaven’s feel (Sakura’s route) and Fate Hollow Ataraxia. The former’s atmosphere somewhat resembles Fate/Zero’s level of despair because of Sakura’s circumstances. Oh and it’s the route where you get to see Saber Alter and Rider duke it out along with a one on one fight between Kirei and a certain servant =3 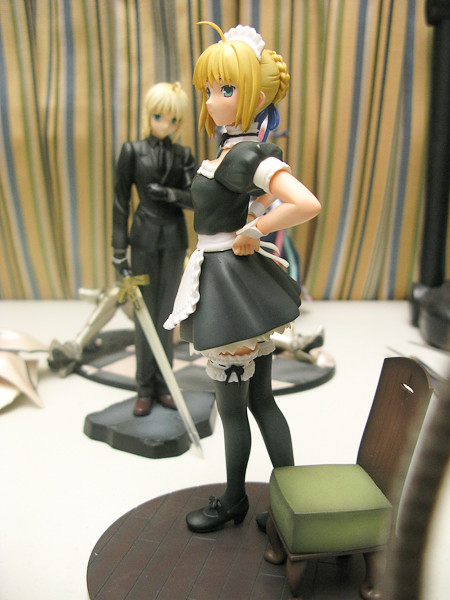 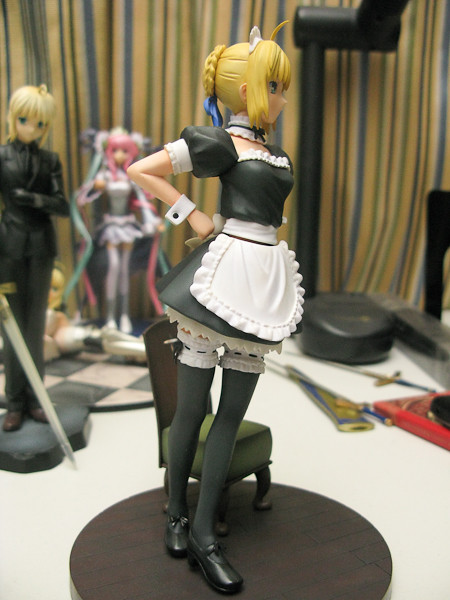 Can you believe this figure was made by GSC? Neither can I, the quality is kinda weird, and it’s not even a bootleg. 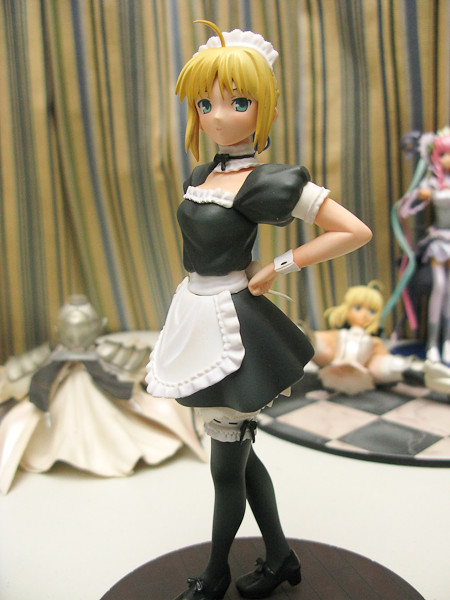 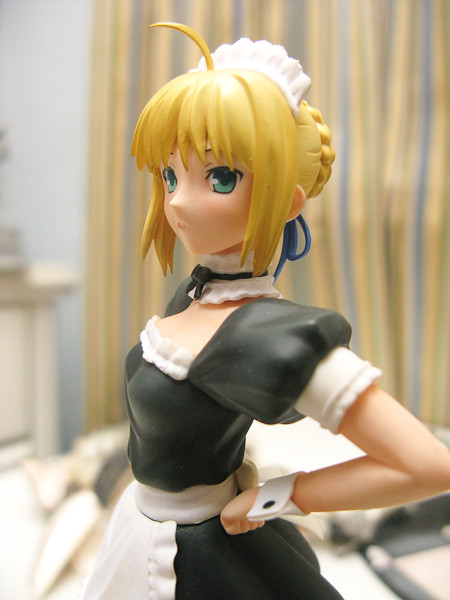 Saber’s face looks more like a doll, at least her pose is a wee bit more interesting than our butler Saber over there. 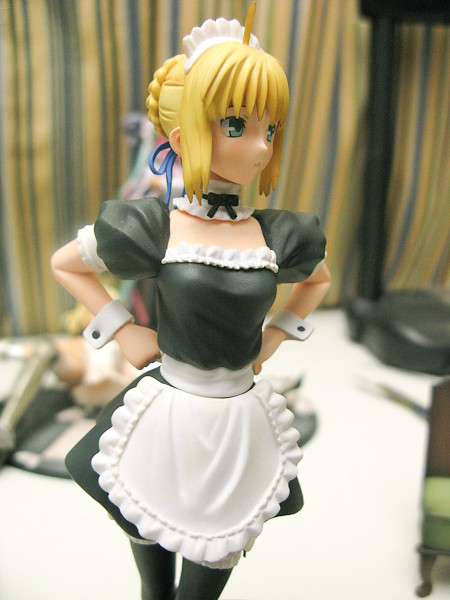 She can look like she’s pouting instead of tying her ribbon behind her if shot in this angle. 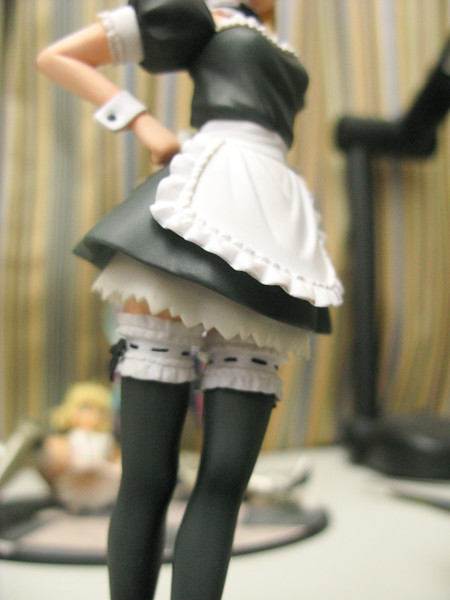 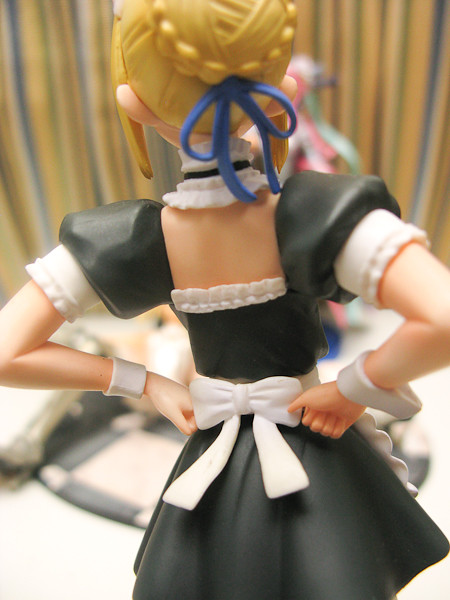 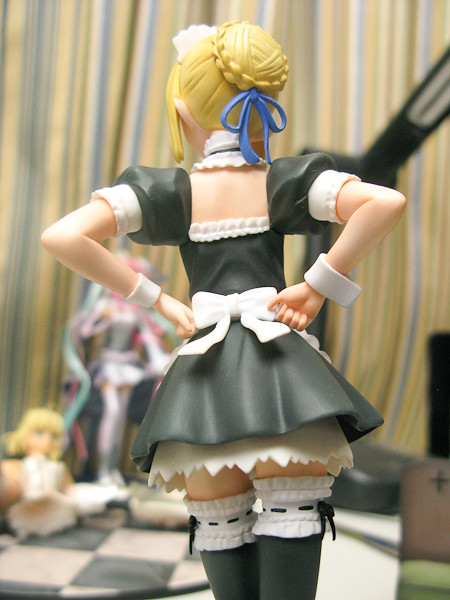 The quality of the cloth, the folds and all, certainly reminds me of Uplark Mio’s costume (the frills specifically). It looks stiff and lacks some ‘flow’ in it. 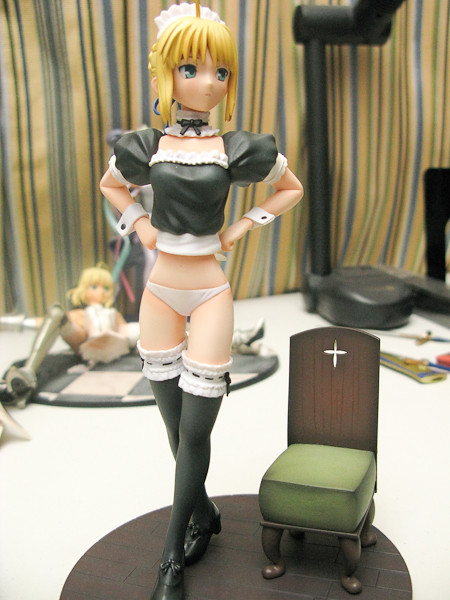 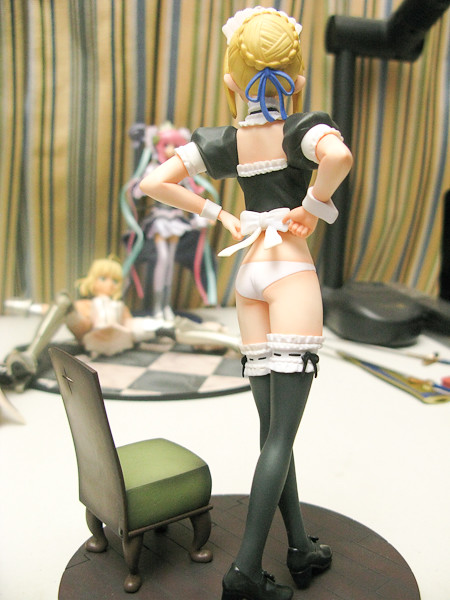 You can remove her skirt just so you know. Do you pose figures in your house with moderate amount of clothing or you go as skimpy as you can? 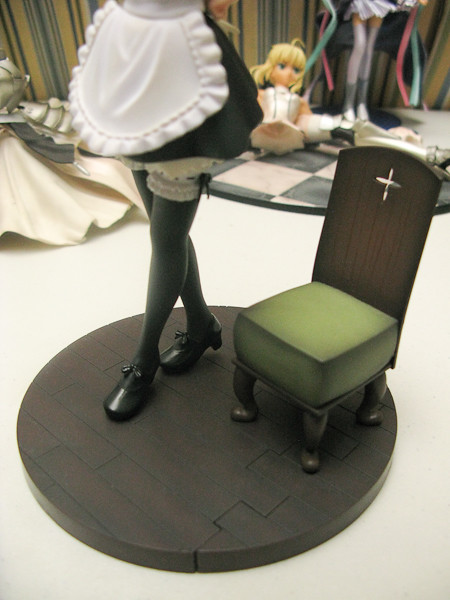 Base is pretty dull, but it somewhat complements the mood that the figure is trying to bring. The chair can be removed from the base for your playing leisure too XD

So there you have it, one servant, two ways of servicing XD Talk about versatile.

World is Mine Miku

or you can just click this link to view the others

I’m currently trying to get back to rhythm with my blogging habits. I didn’t blog a single entry in the entire course of October. Thankfully there were still some readers that kept viewing the blog. I hope you guys can continue to support the blog and please do come visit as I try to share with you guys more stuff that I’m interested in.