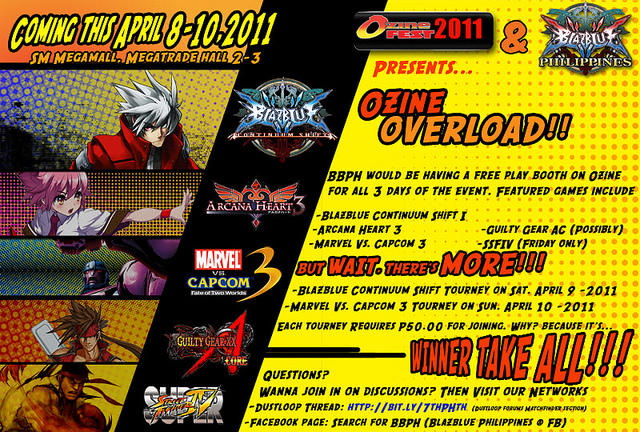 Been really busy the past month and this first week of April because of multiple opportunities that came up, which I took all at once. No I’m not regretting I got too many, in fact I believe that it’s a learning experience that will allow me to grow as a person. For starters, last week I was invited to go to a company sponsored vacation trip to Barcelona and I really did get to see new things and learn about their culture. I’ll be posting a report of the places I’ve been to after I’ve gotten most of the pictures from my other co-workers (300+images to edit ^^;;) 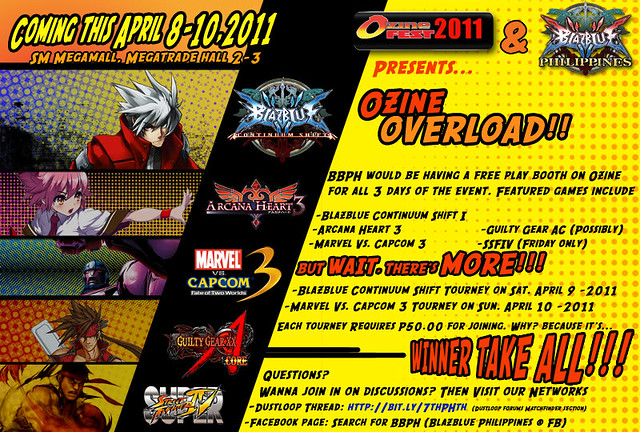 This week, the fighting game community I belong to is going to join anime magazine brand, Ozine, in their yearly three day event, Ozinefest. On all three days, we’ll be handling a gaming booth which will allow free games for fighting game enthusiasts such as Blazblue, Marvel vs Capcom 3, Guilty Gear and Arcana Hearts 3.

The games that we’ll be featuring this time are Blazblue Continuum Shift v1 and Marvel vs Capcom 3. There will also be tournaments for these games on Saturday and Sunday. For more details please visit Ozinefest’s website. TAke note that the schedule placed there is wrong, Saturday is BBCS, while Sunday is MvC3.

So far our community is handling events for Blazblue and more recently, Marvel vs Capcom 3 (we’ll have to see if we can handle two games). We’ll see if Melty Blood, Arcana Hearts, Guilty Gear, and other games have a following here in the country, but we do play these games as well. Our partner, Pinoy2dfighters , handles Street Fighter, King of Fighters and MvC3 as well.

We also have other plans which we’ll reveal on that day as well to promote 2d fighting games in the Philippines.