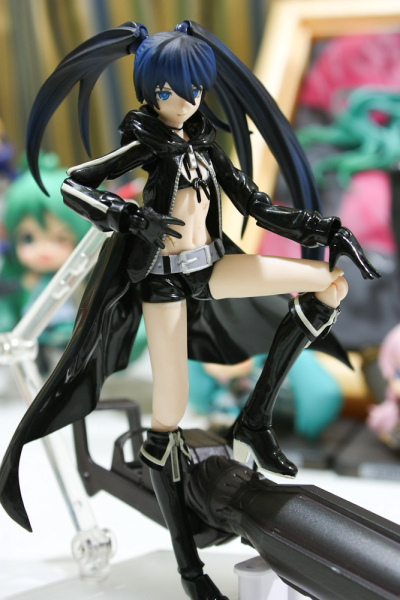 Took me around half a year to get this one re-done because the previous one wasn’t satisfactory to me, anyway here it is, the Black Rock Shooter Review 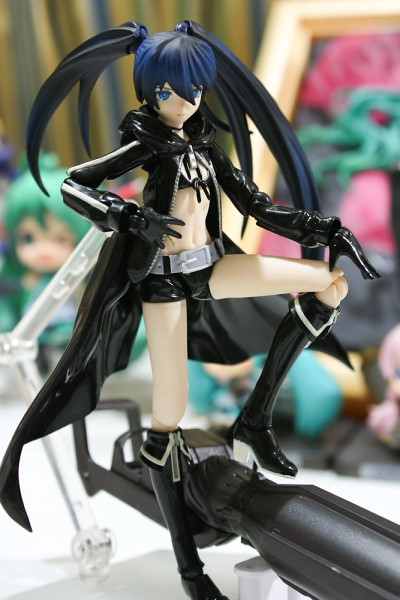 Since I’ll be gone for a week and it doesn’t help that I’ve been blogging for only once a week since two weeks ago, I’ve decided to come up with this at the moment. Work has been keeping me preoccupied and so other hobbies as well. Anyway, here is the BRS figma review. 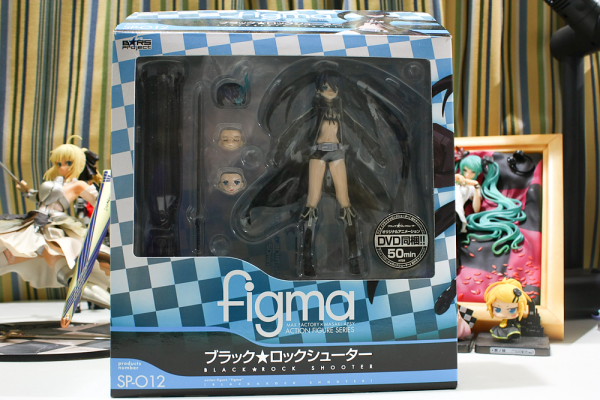 I have to say, I am not impressed with how BRS was packaged, they could’ve changed the white with blacks instead and the entire label with black graduating to blue with white font, but it could’ve been a budget issue on their part. The checkered pattern is the only thing that makes this box stand out from the rest lol. 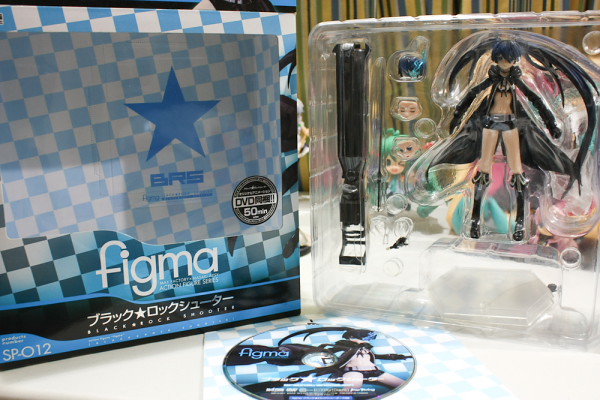 Unpacked everything, I was surprised at the one item that stood out the most, because I don’t see this in any everyday figma (or figure for that matter). 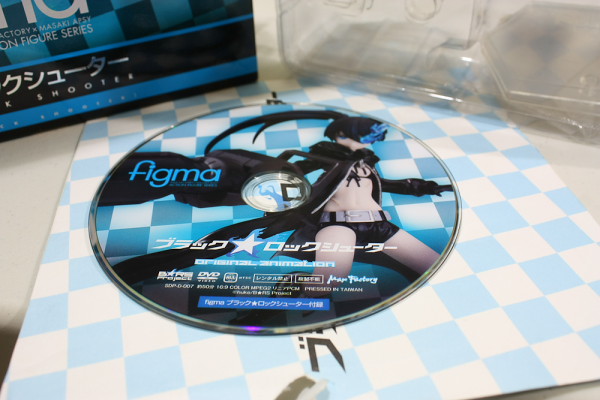 The figma also comes with a 50 minute Blu-ray DVD of Black Rock Shooter the Animation. Huke must be really proud that one of his creations took of from being a character design in a song, to multiple fan-arts, to art books, to a figma, and now to an animated series. This just ensured that you would enjoy your BRS experience not just in a figma, but also in blu-ray as well. 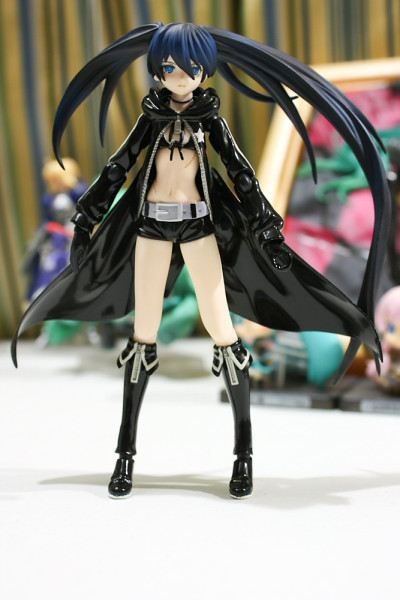 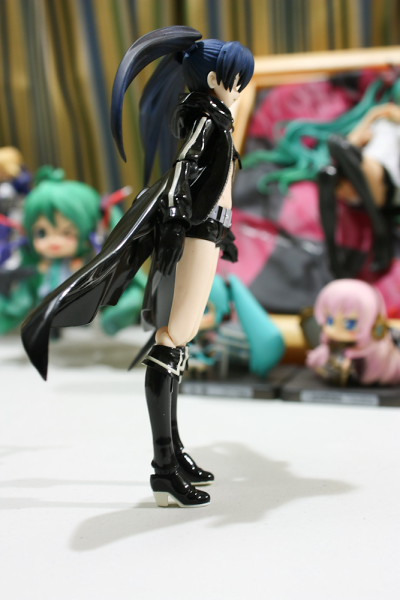 The one thing I had a hard time about this figure is allowing it stand without the stand. BRS’ hair makes it difficulty for it to stand properly, so later on you’ll notice that ill be using the stand. 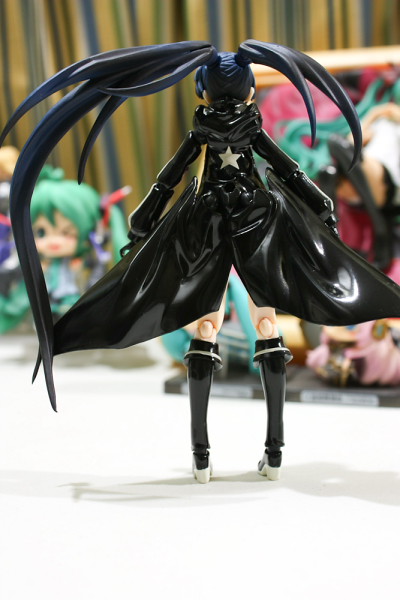 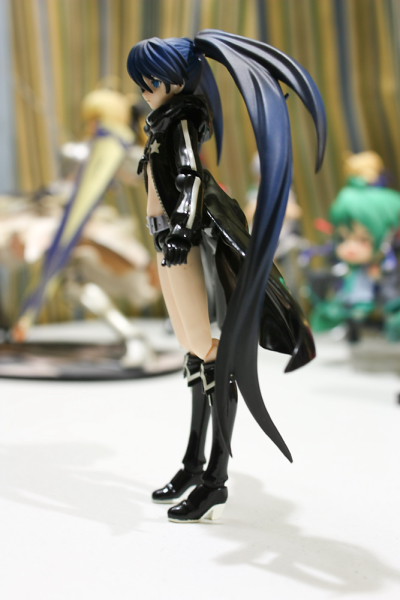 Another dislike about this figure is the paint. The paint sticks to the fleshy parts of the figure which leaves it with some black markings. Its removable, but it’s a hassle to keep removing black stuff from time to time = 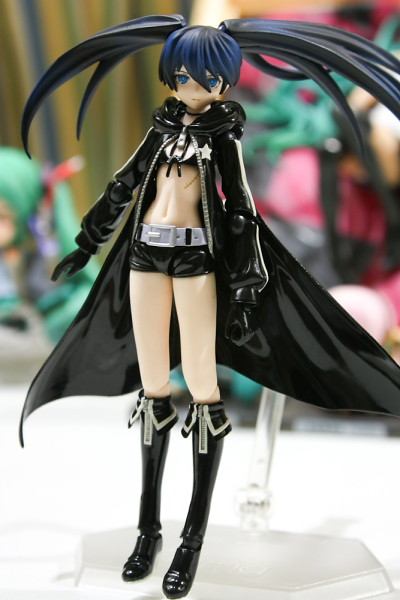 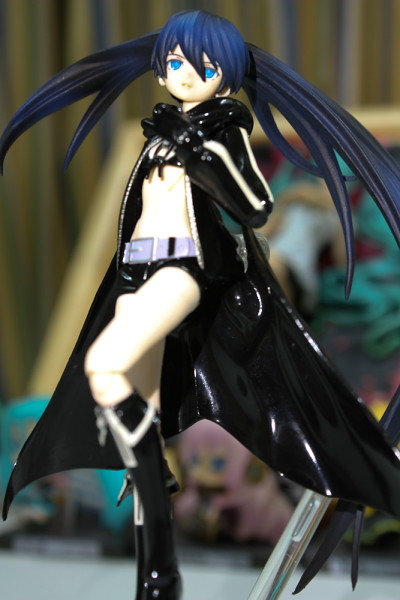 If I were to be asked what are the top three parts I liked about this figure it would be the waist, the eyes, and the hair. The gradient on that hair is amazing, and the eyes looked like as if it really was glowing. The waist on the other hand was sculpted very nively along with the battle scars our BRS has received. Note that you’ll find out where she got that scar in the Blu-ray XD 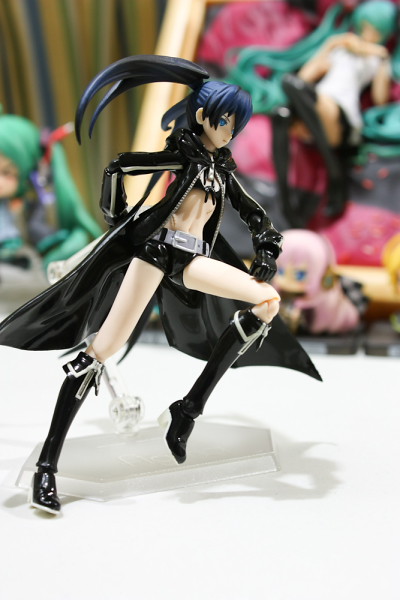 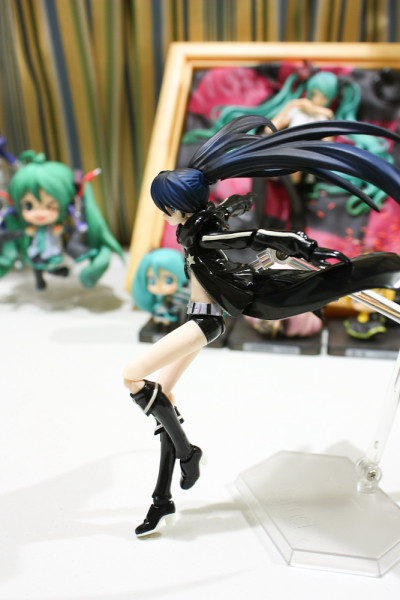 Her coat tails are a very nice addition and GSC has done a good job of making it articulated instead of just letting it be some soft plastic part. 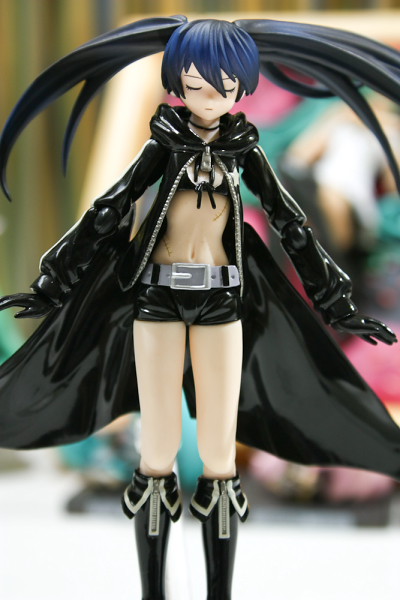 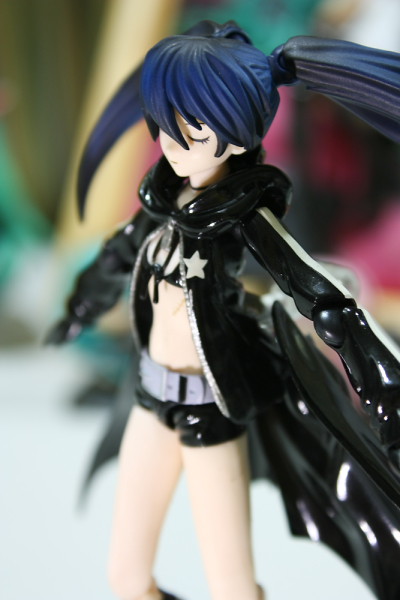 The figma comes with 4 pairs of hands and 2 faces, one of these faces is the closed eyed one. 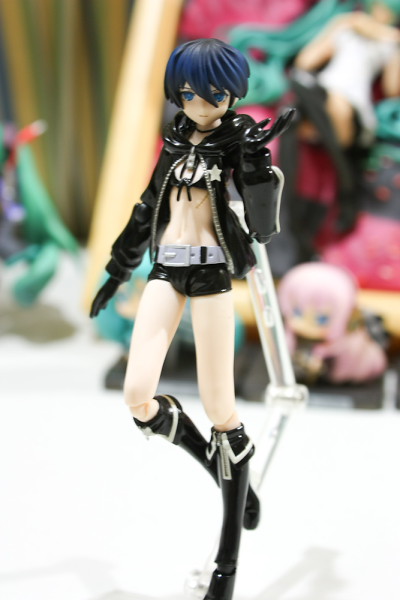 Played a bit around and removed some parts off the coat and the twin tail. BRS looks like some girl from a rock band here ^^;; 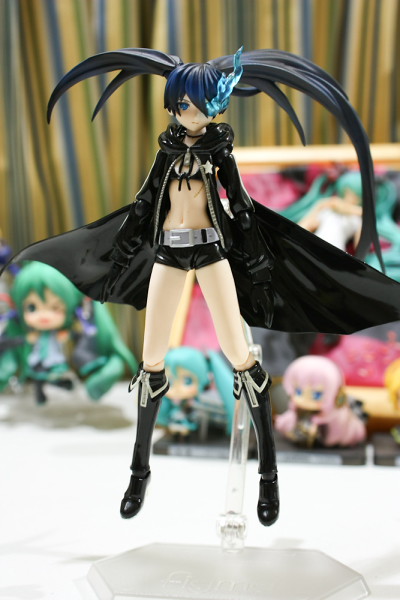 She also comes with a hair part with the blue flame there. I don’t know up until now if that blue flame indicates her “rage” or something, all I know is it’s a nice addition which makes her overall character design stand out even more. 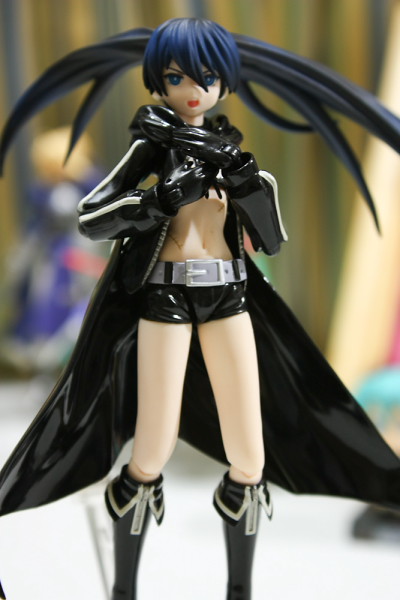 And here we have her angry face. Wonder why she’s so offended? XD 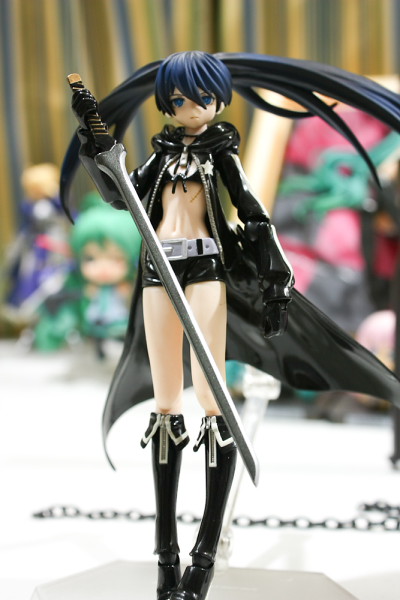 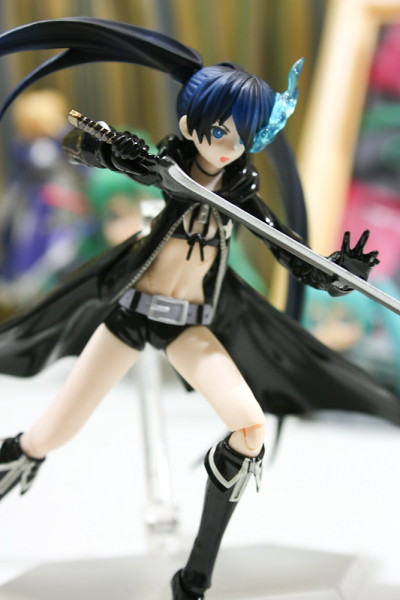 She comes with two weapons, one of them is her sword which you see at the first portion of the DVD. Speaking of swords I think I’ll buy an Ein figma and another BRS figma to experiment on modding it. So far it seems that I cant remove the back jacket part along the BRS figma’s waist, like I said it “seems”. I just need Ein for the bare skin arms =D 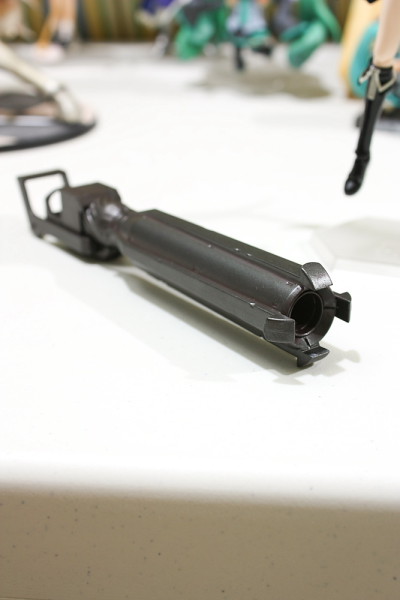 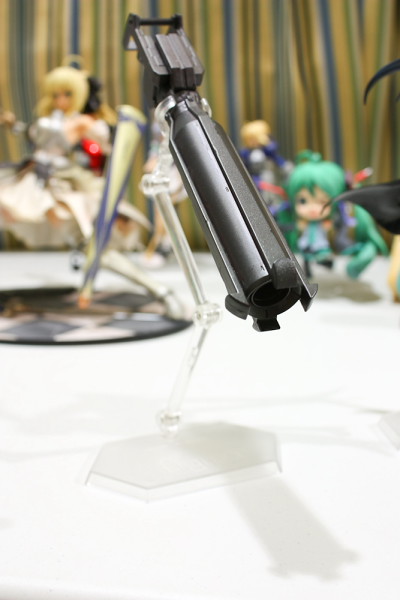 Another weapon is her Rock Cannon, BRS can use it to shoot at her enemies or swing it around like a huge club! The cannon is so huge it comes with its own stand as well 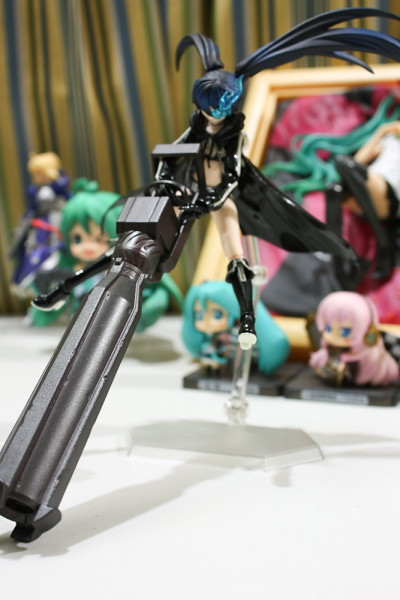 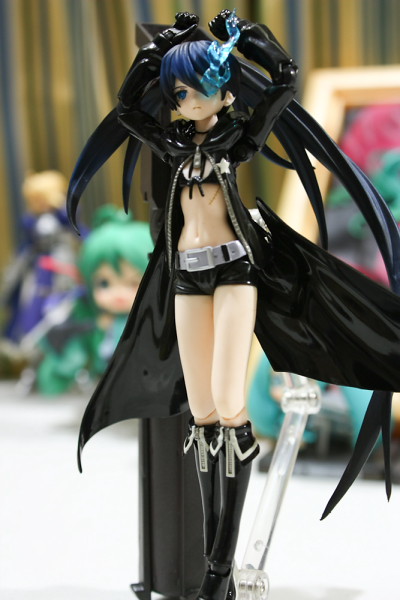 You can make her pose with it as well like some of the illustrations she came with or try and make her look like some angel of death about to fire off a huge cannon beam. Had a hard time with the second one because the cannon wont cooperate XD 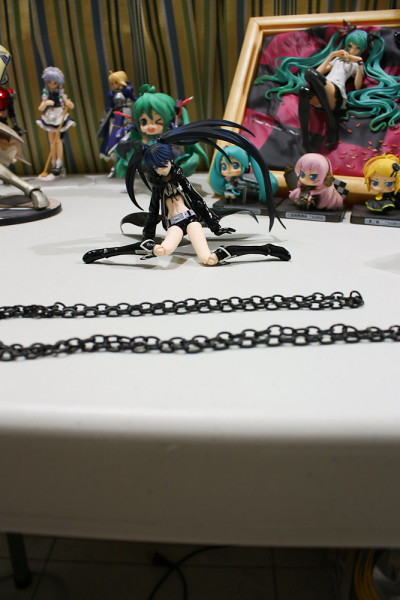 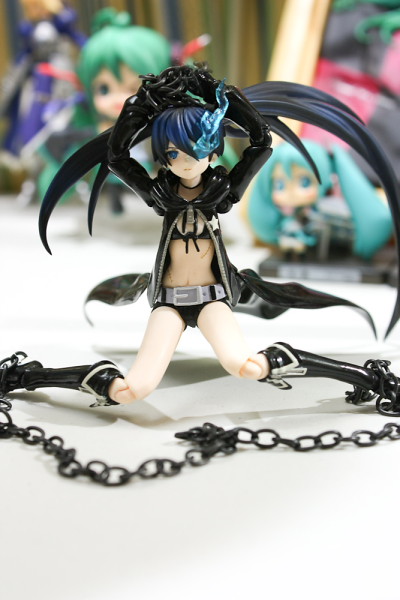 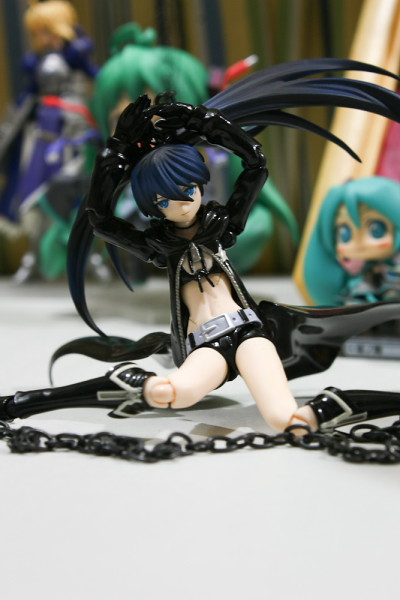 She also comes with two chains as well. Tried to portray her being captured by Deadmaster. The one with fire off her eyes didn’t look on the spot and the pose is somewhat weird XD 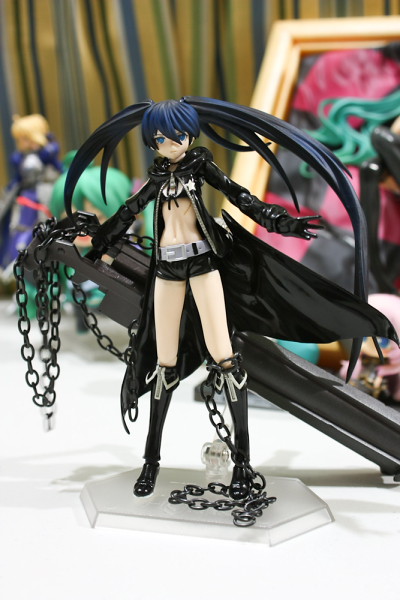 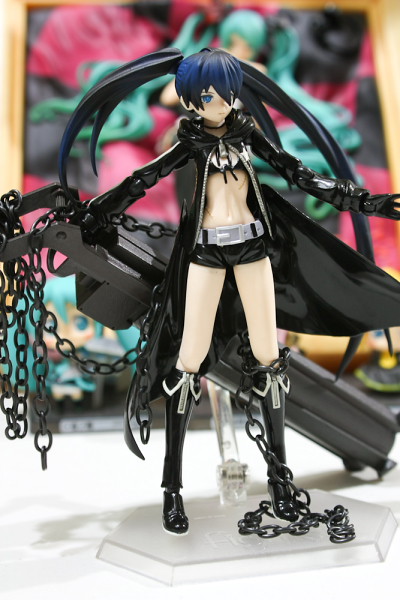 Final pose of BRS on my sidedesk area. I’m very much satisfied with how BRS turned out as a figma and I might be getting the Black old Saw and STR. Dunno bout Deadmaster though, I find her head part intriguing, but the rest seemed kind of boring compared to the rest of the cast.

Here is the video of the BRS song, i prefer the version where choucho is singing it though XD. For other links to figure reviews, check the links below or you can simply click the “Figures” portion on the top menu ^^

World is Mine 1/8 Scaled from GSC Review 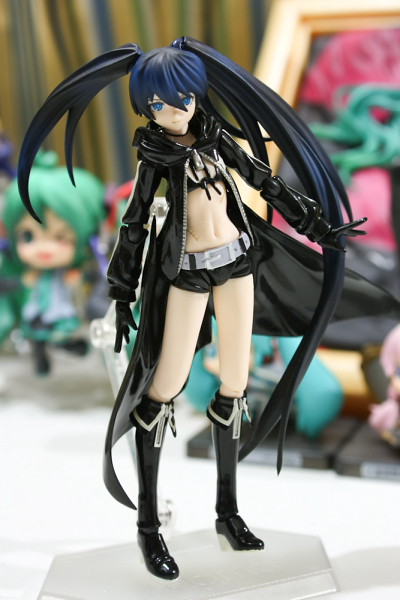 Not bad for a two thousand peso figma that comes along with a blu-ray as well. I still have issues with the black paint though, but outside of that the figma is pretty good and if your’e a collector of huke’s works or vocaloid stuff, BRS is a good addition to your collection.