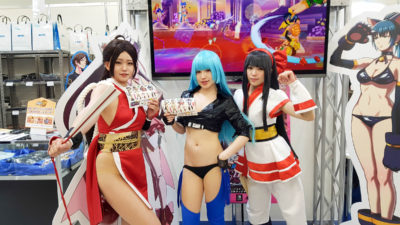 Here’s part 2 of the EVO Japan 2018 post which I previously made. This one is more on the booths found during the event. 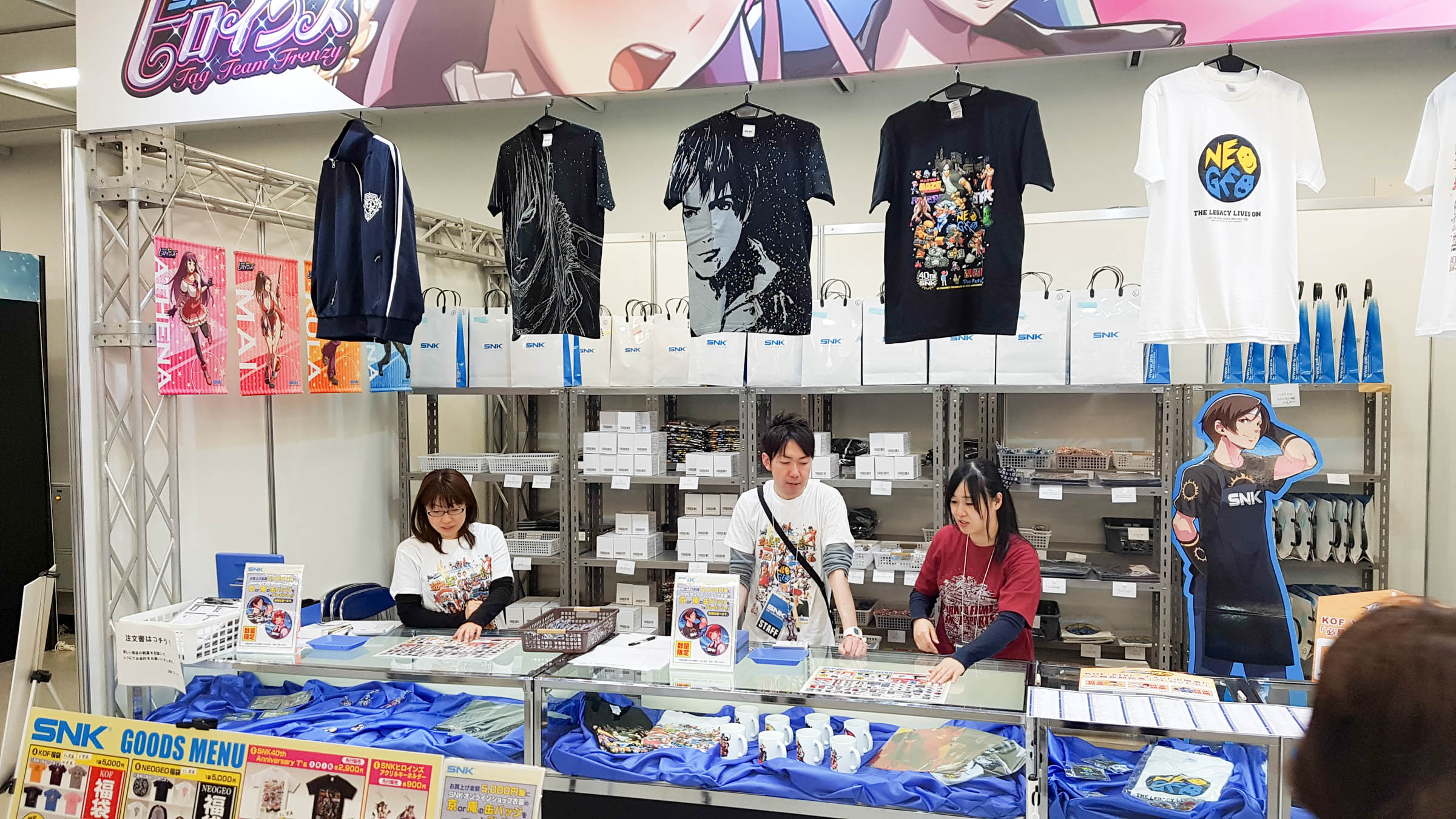 The event was so large in scope (2 main function halls) that I decided to make a separate entry for the booths found during the entire event otherwise people might just forget about the focus of the fighting game tourney.

Apologies in advance as there were some booths that i didn’t take pictures of like the one selling the official poster and pamphlet and the Nissin’s booth but I believe I got maybe like 90 or 95% of the exhibitors who appeared during EVO Japan. 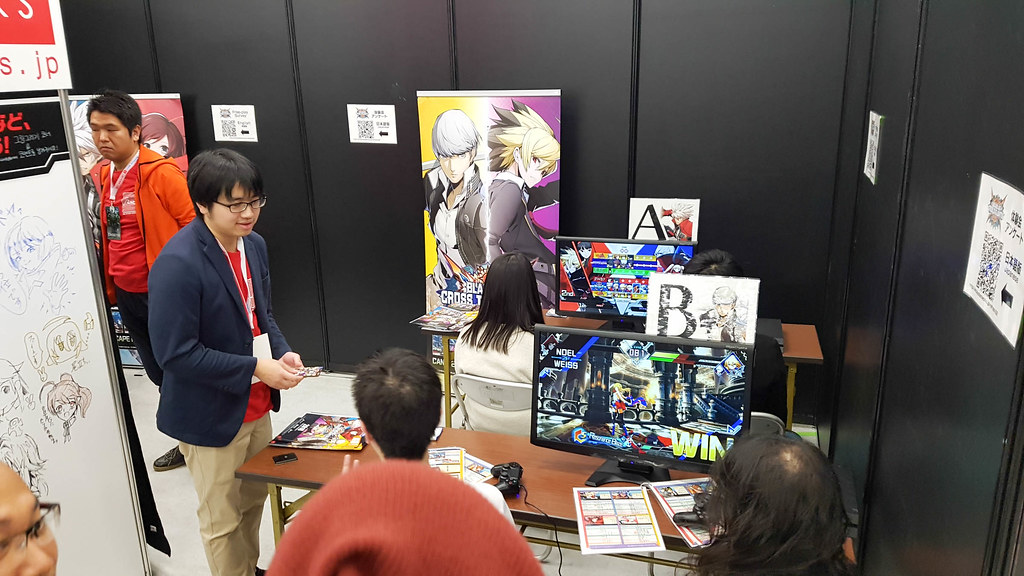 First booth that probably caught my attention upon entering through the upper venue(main hall B i think) was Arcsys upcoming game, Blazblue CrossTag Battle, which is a VS game consisting of characters from Blazblue, Persona 4 Arena, Under Night In-Birth 9we’ll call it UNIEL moving forward hahaha) and surprisingly and perhaps out of nowhere, RWBY. I’ve been able to play Blazblue for quite the longest time and I managed to briefly play UNIEL and Persona 4 Arena so it’ll be really interesting to see how theese characters will work under one system. 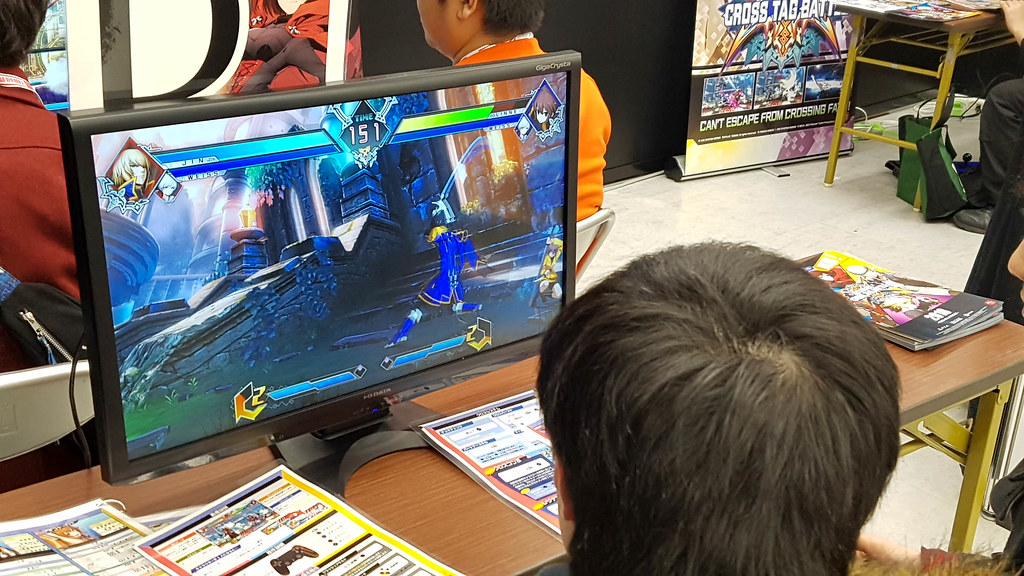 Sadly I was able to only play 5 minutes so I really cant speak much whether BBTag was superbly good or not. It’s definitely a game that gamers, who don’t have a lot of time to invest, would enjoy and prolly keep playing with friends on a casual setting. Personally I might get one myself regardless of the issue on half the roster being DLCs. 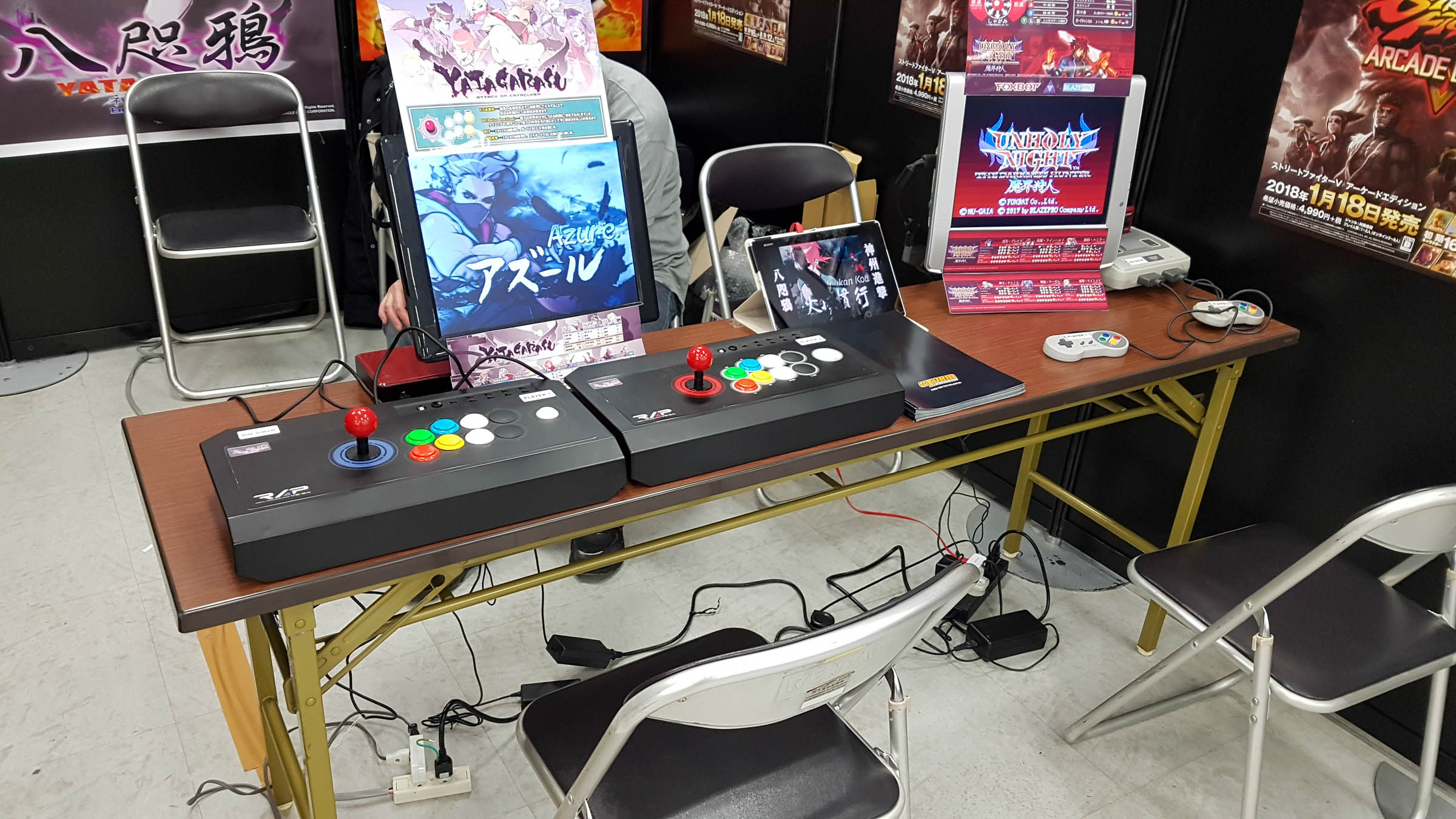 Yatagarasu used to be one of those indie FGs which took off for a short time, much like DiveKick, but the hype subsided due to the bigger presence of the bigger fighting games out there. 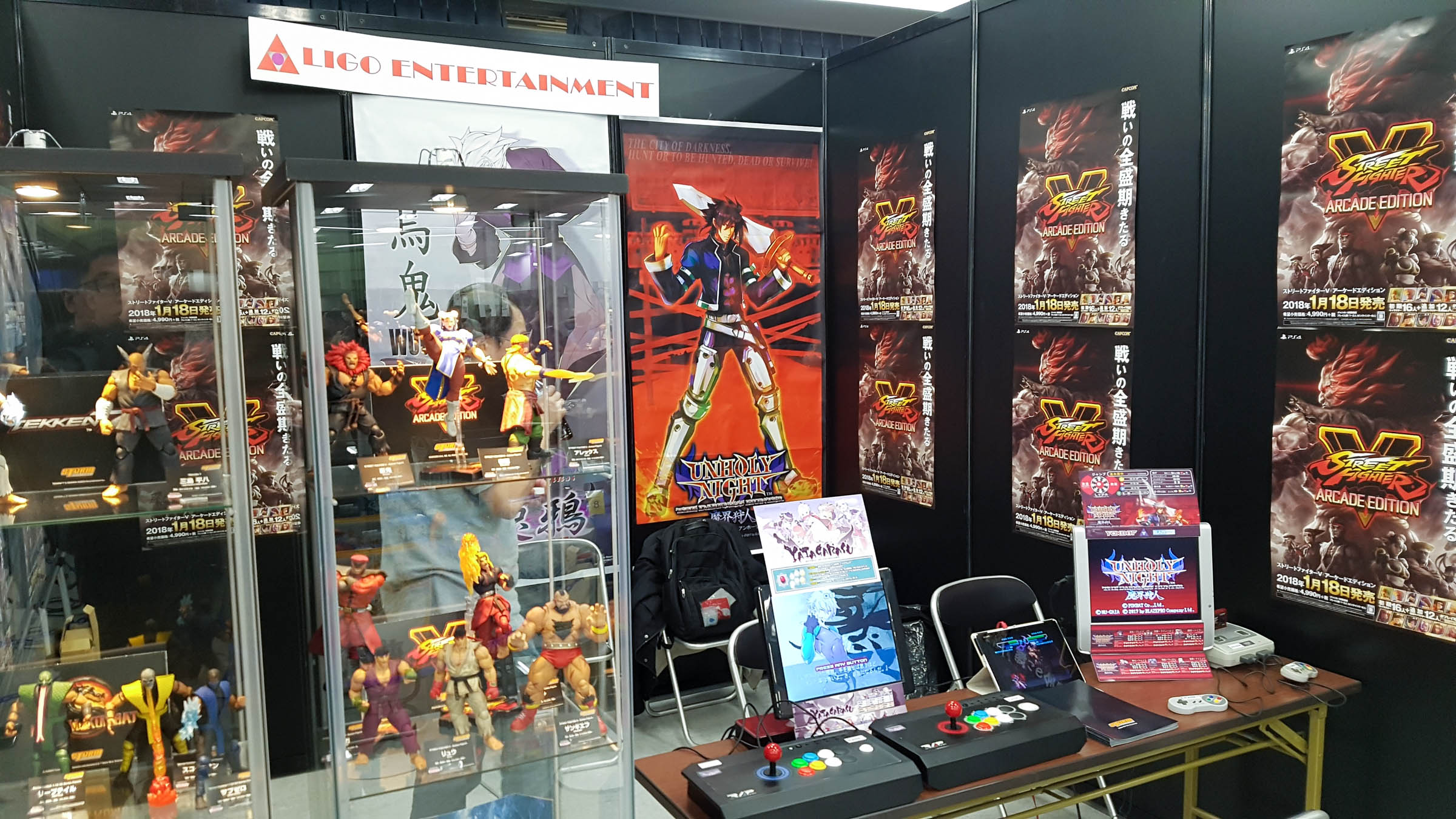 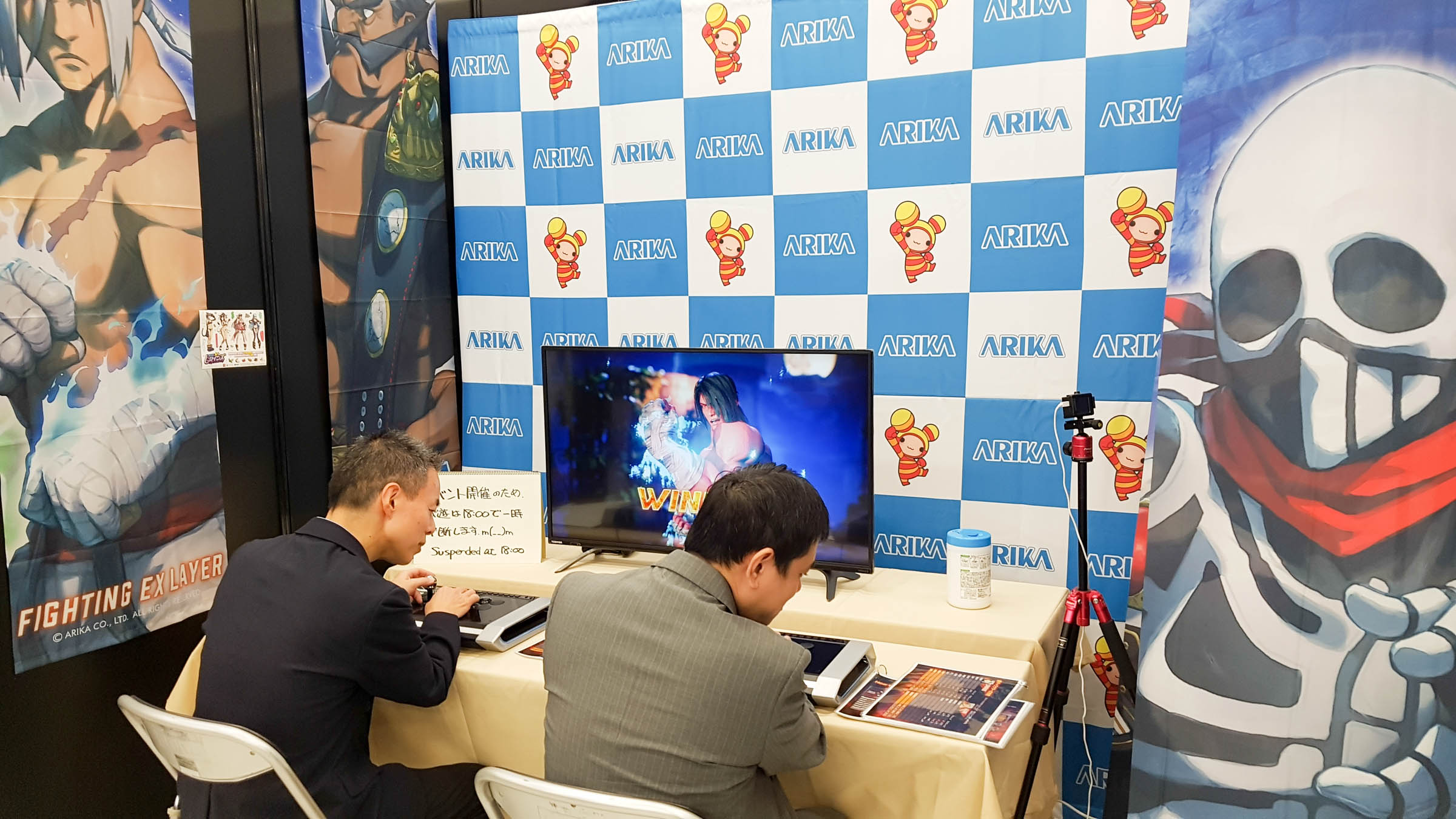 Fighting EX Layer is one of the upcoming games this 2018 that’s trying to gain relevance and traction in the fighting game world. They seem to be relying mostly in word of mouth and article write ups for their marketing. As for the gameplay, I haven’t touched the game yet (neither was i able to in EVO), so I cant give even a vague opinion on it. Hope it does well though since the mechanics i read were interesting as it is. IMO though they should make the sounds and SFX more uhhh up to date i guess? That’s just me though. 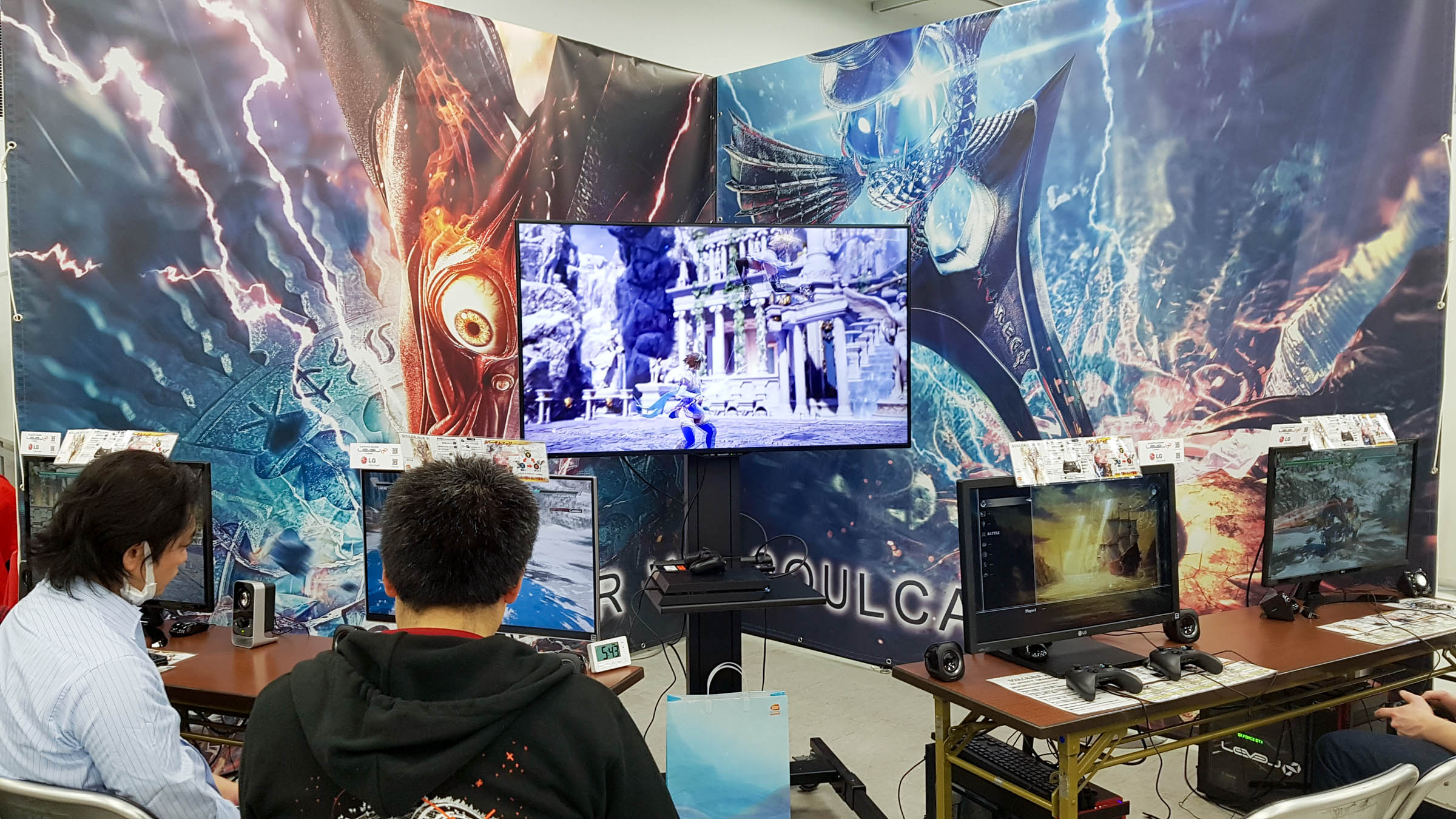 The line for Soul Calibur 6 was very very long that me and my friend decided to just go early on Day 2 to get our ticket. Yes there is a ticket to play 5 minutes of SC6, but it was worth it! The gameplay was very reminiscent to Soul Calibur 1 and 2 which were arguably the best versions of this game. The build we tried had moves that were missing from certain characters (ex: Mitsurugi’s dKB) but the overall experience of the game was very very good. This is probably the fighting game that I’ll be giving my attention to (along with Guilty Gear) this year. 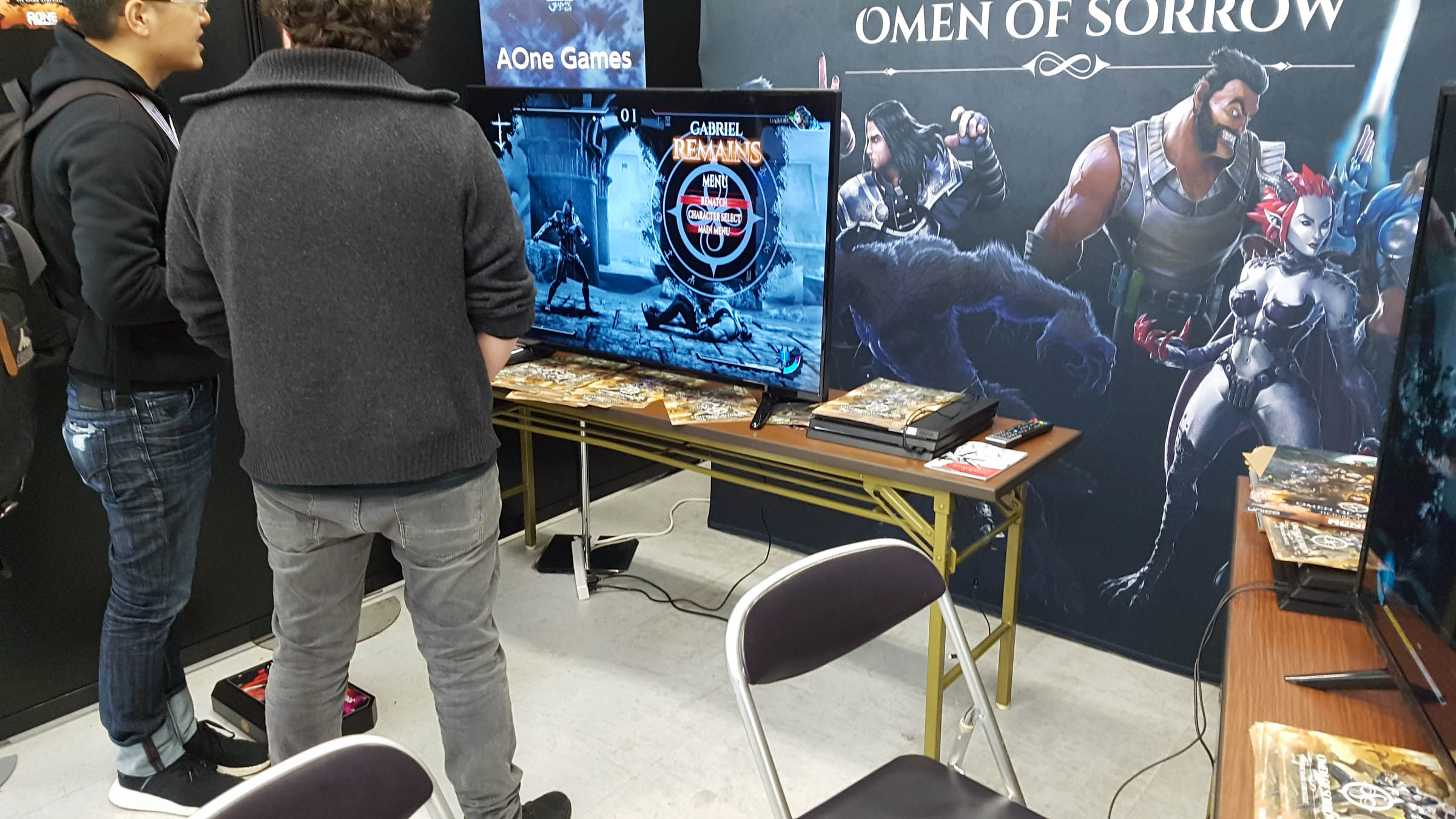 Omen of Sorrow. Wasnt able to try it out, but it looks like Mortal Kombat and Injustice to say the least. 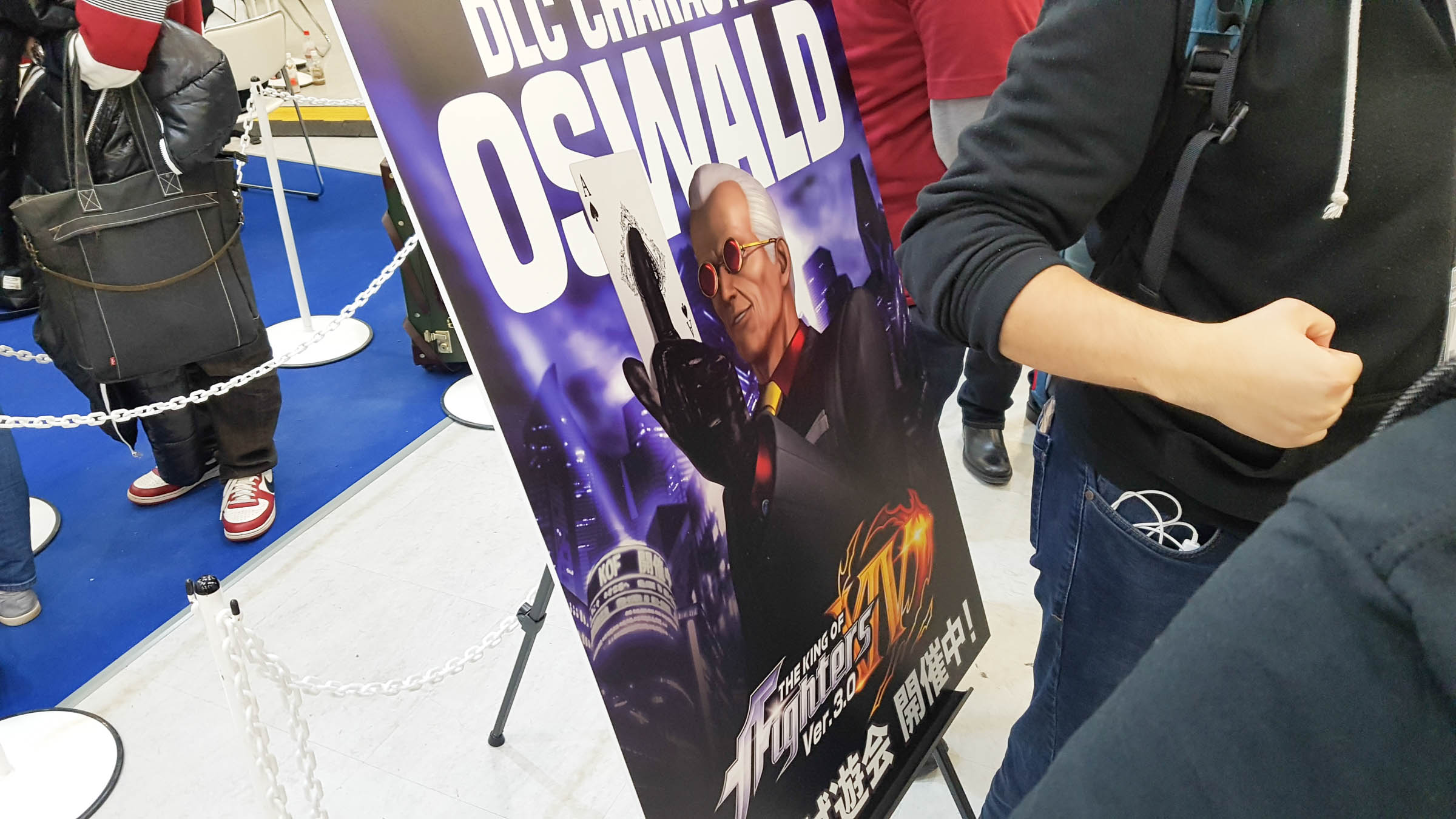 SNK booth had KOF machines running with the latest DLC character Oswald. Looks-wise I preferred KOF’s 2d sprites compared to the 3d version which we see now but thats just me. KOF and I just dont get along. I did try playing it but i just cant seem to understand the nuances of the hop and the regular jump inputs hahaha. What about you guys, have you played any of the KOF games? 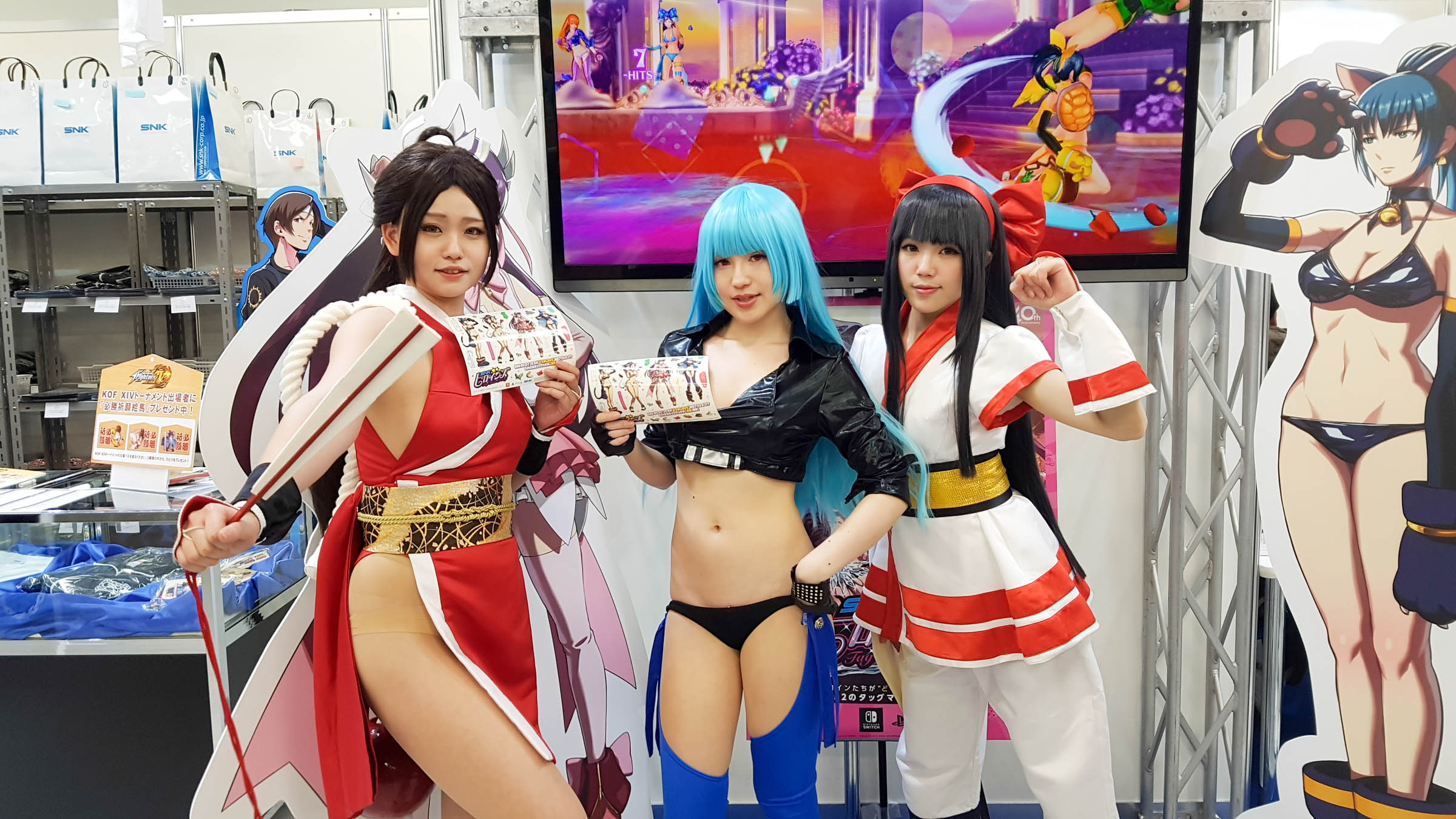 Despite not having a setup for it, SNK was also promoting their upcoming fighting game, SNK heroines. Is this the new DOA of fighting games?

I don’t know what to make of the trailer as it really sounds more like a visual novel trailer than PV for a fighting game.

Aside from the games and the booth ladies, theyr’e also selling Tshirts, and other goodies as well. By far I think the SNK booth had the largest exhibitor booth area followed by BBTag and Soul Calibur 6. 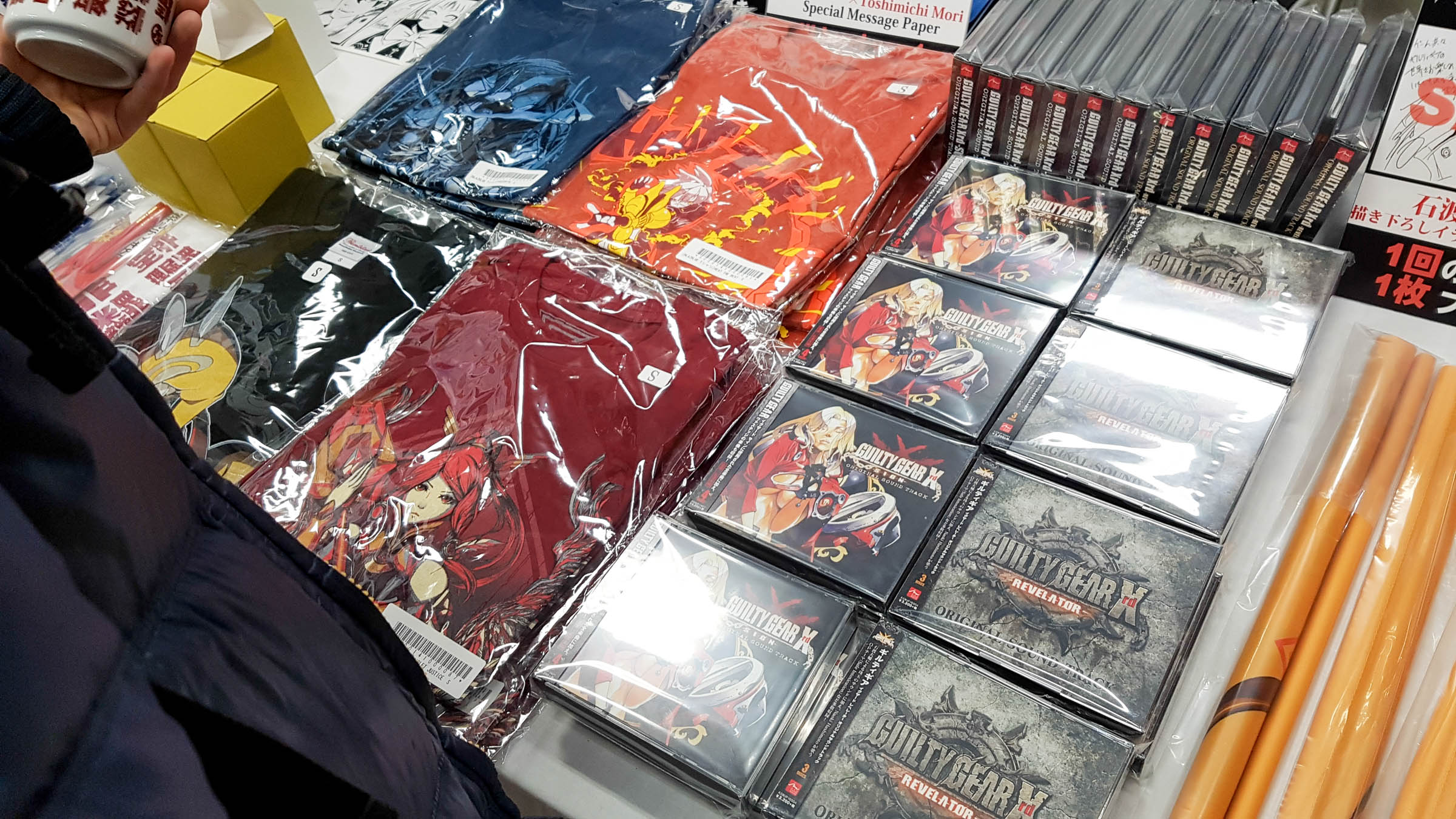 And just right across the booth is the arcsys booth selling some music cds, shirts and manga. Was looking for character buttons for arcade sticks in their booth (and also the Akihabara Kotobukiya shop) but to no avail. 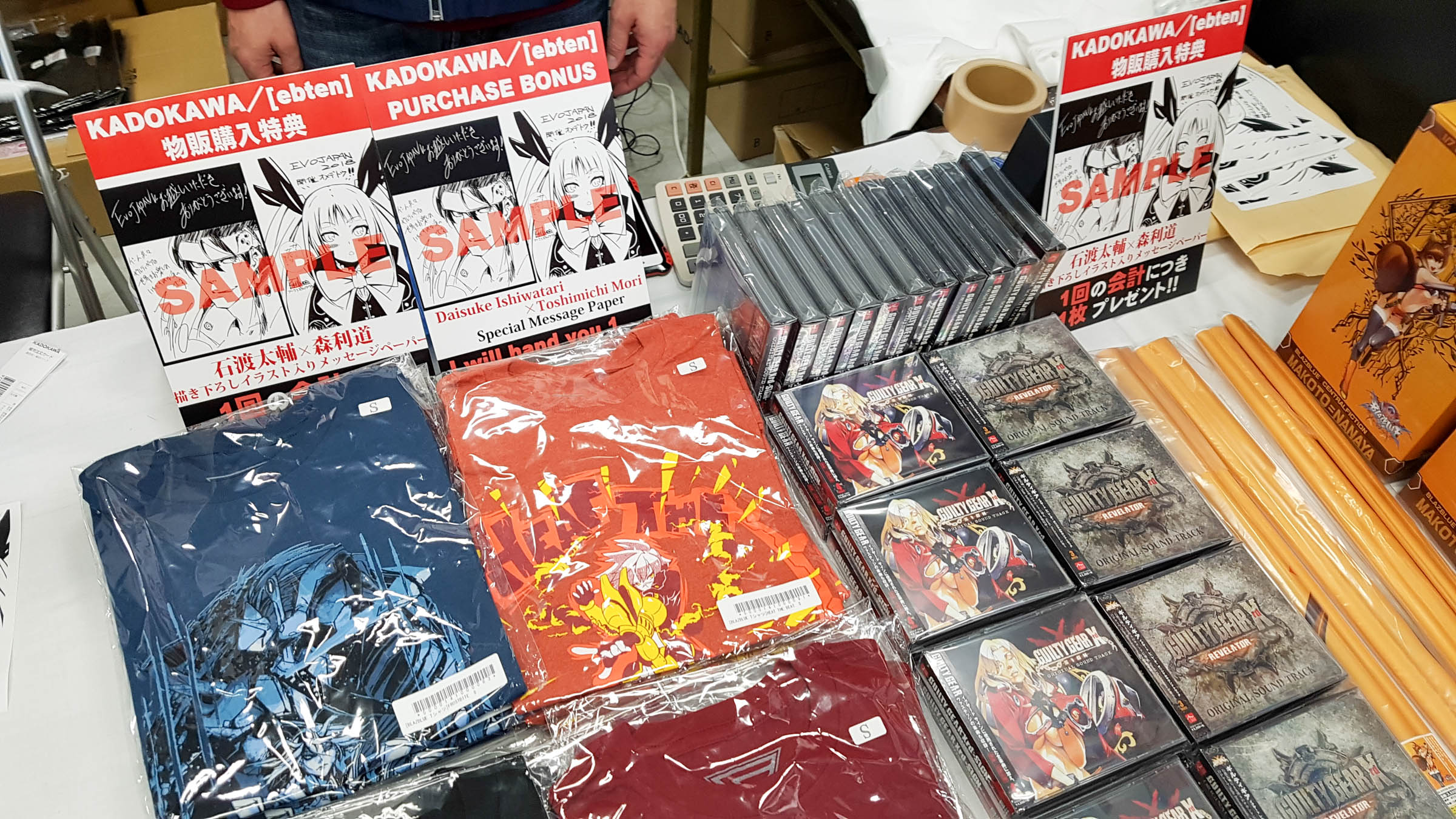 EVO booth selling EVO items like keychans, buttons shirts and hoodies. Of course I had to get at least a single piece of EVO memorabilia. Will make a later entry on my loots in EVO and Japan in general ^^ 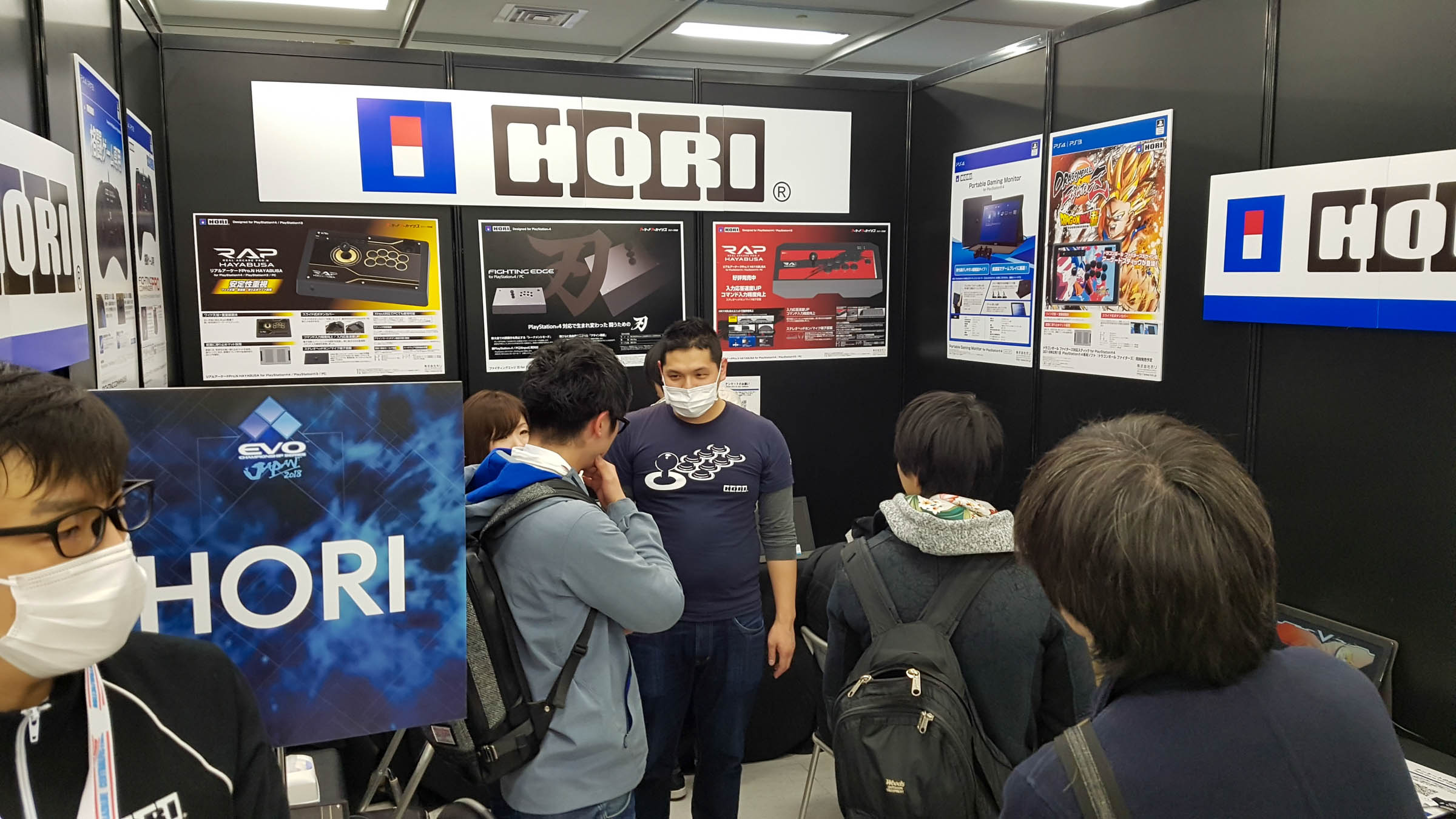 Hori selling sticks in case you manage to mess yours up :^) Jokes aside, I was thinking of getting a new arcade stick but I decided to forego the idea. I had my HRAP V3 stick (which stick works perfectly) and bringing home another stick will mean It’ll be taking up space AND weight. Whenever I travel abroad, my purchase limiter would be luggage space and baggage allowance and I refuse to upgrade to ensure I dont buy too many items. Aside from sheer willpower, how do you guys manage? 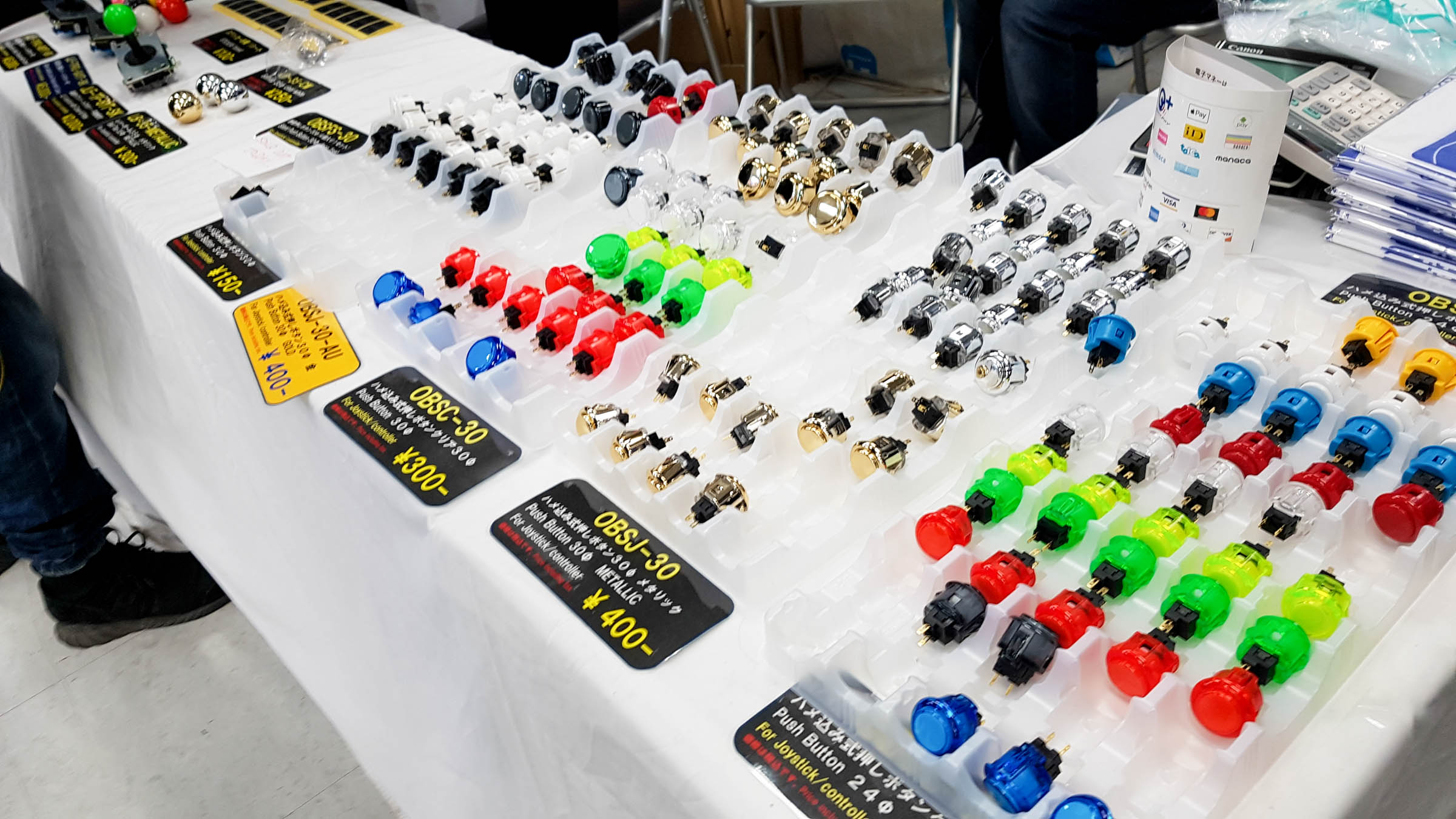 It wouldn’t be a complete booth lineup if there were no parts sellers now wouldn’t it? 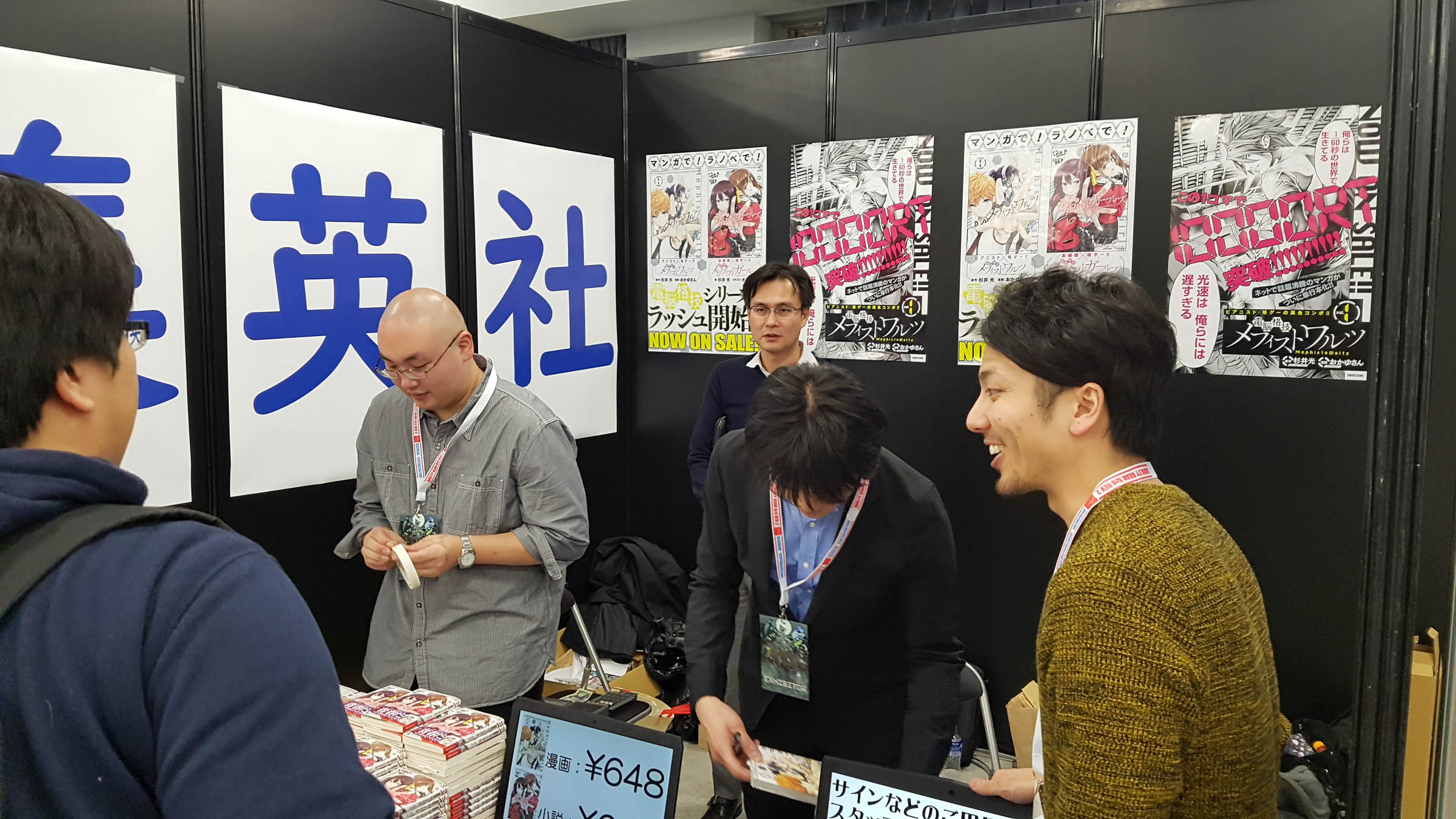 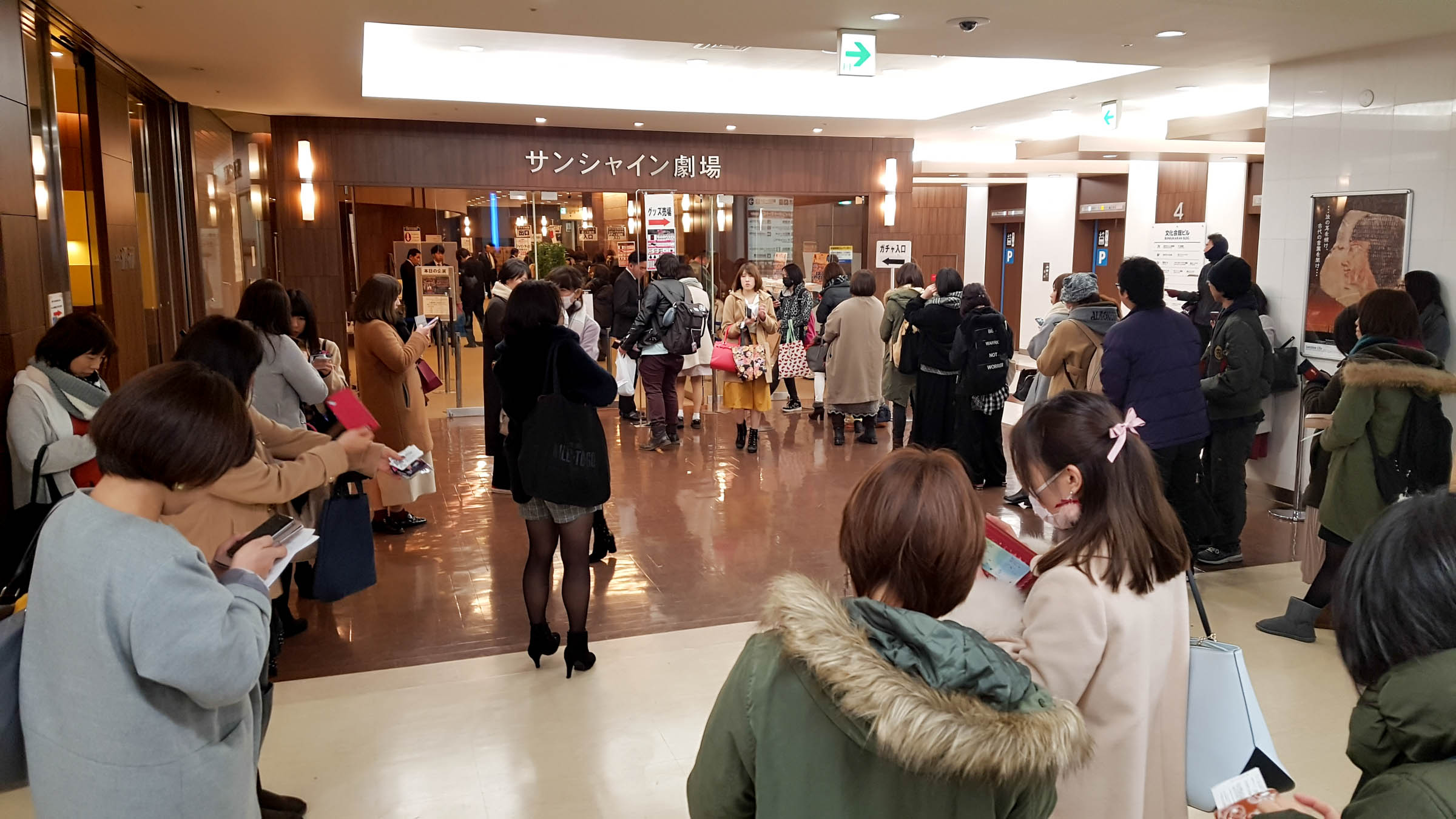 That’s probably all of it. If you were wondering about the picture on top, that would be the hall adjacent to EVO where an idol handshaking event was happening.

The Third portion (EVO loots) will follow shortly after and then the places which we visited in Japan when it wa ssnowing really heavily.