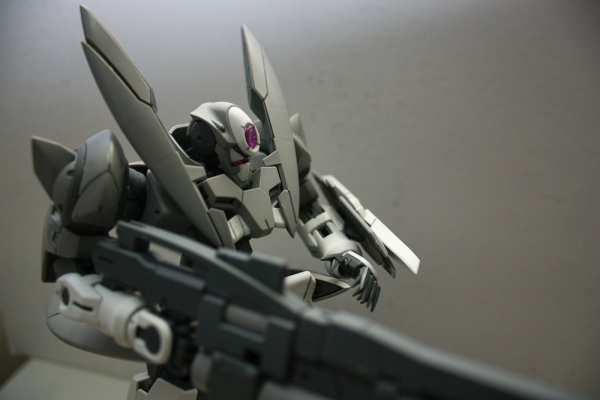 So you guys have seen the previous mishaps I’ve had with gunpla and I’ve decided to revisit doing gunplas again just for the fun of it. The GN-X is a grunt unit in Gundam 00 which was just as capable as the average pre-trans am gundams. It’s a very good looking grunt mind you, and I actually prefer it over a Zaku. 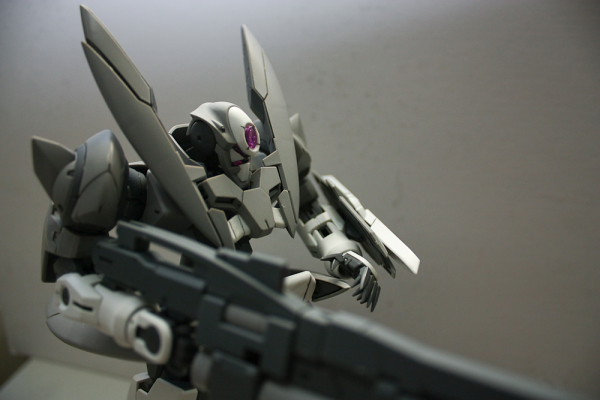 This will be the first time after a few years that I’ve decided to touch gunpla again and this is the first time I’ve ever tried assembling a master grade kit. It was pretty time consuming, even if it was a straight build gunpla (straight build means building it without much modifications like a new paintjob or add-on mods), I still found some sense of accomplishment right after building this. 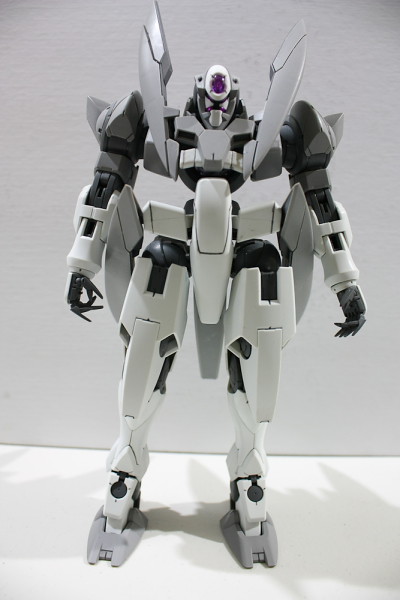 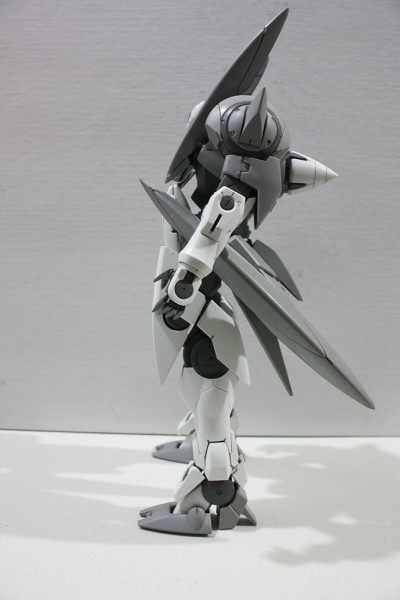 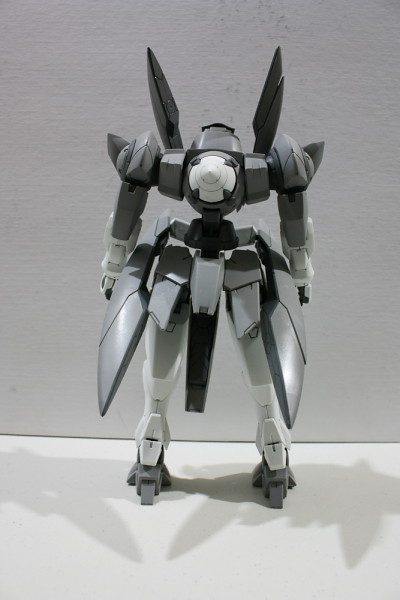 The usual front, side and back views. I have to say, it really is a totally big difference when you’ve panel lined your gunpla and sprayed some top coat on it. Without the panel lining, the entire mech would look flat and lacking in detail. Without the top coat, the entire gunpla will look plasticky. Use topcoat – flat for a matte look, unless you want it shiny like a car, then go with glossy or semi-gloss. 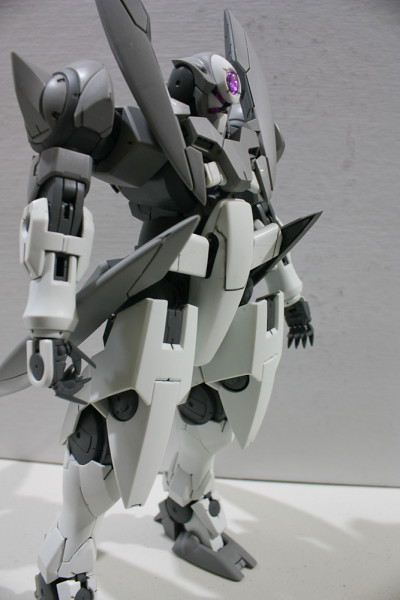 Some details escaped my eye like that small nick, or those small smudges around the waist area near the cockpit. Remember to sand your gunplas after cutting them from the runners and use alcohol to remove excess ink from panelling. Which reminds me, to check the previous builds on this gunpla, click here and here 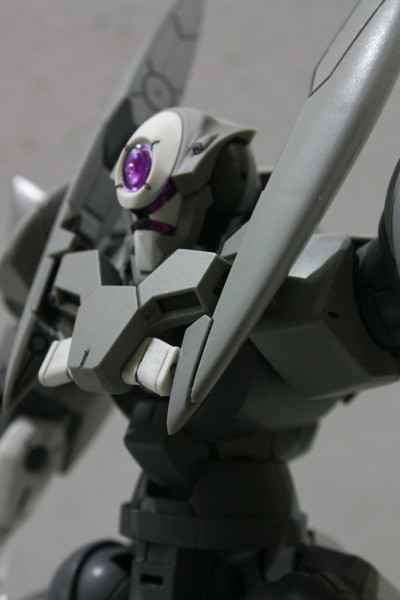 Since I am now using the 450D instead of the G9, my macro capacities have terribly diminished. Trust me, the 450D’s built-in macro is near useless compared to most digicam macro features. Dirty binder is dirty, but oh well. I might just make the entire mobile suit look weathered in the near future instead. 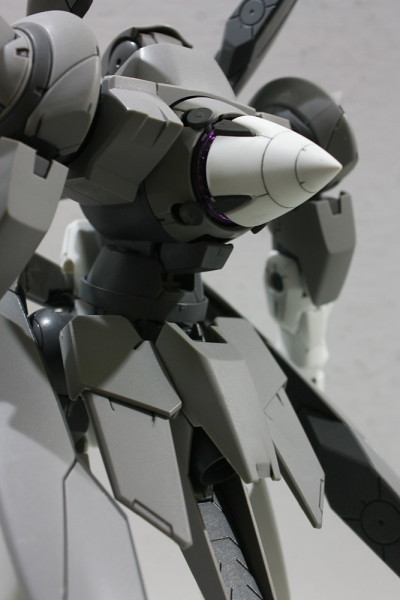 I love the back part of the waist the most! It reminds me of the waist boosters of the Devilfish from Eureka 7. GN-Drive installed here, but I decided not to fully put it in to make the drive’s purple parts stand out even more. 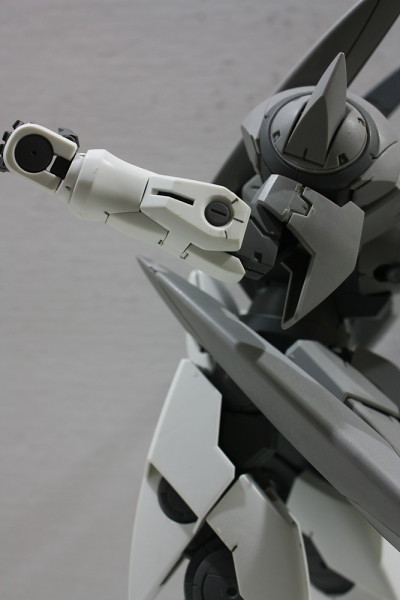 The poseability of the arm, but there were parts that had nicks which were hard to remove. Luckily, a lot of them looked like it was part of the entire mobile suit, so no biggie there. Arms are a bit dirty due to the excess ink. 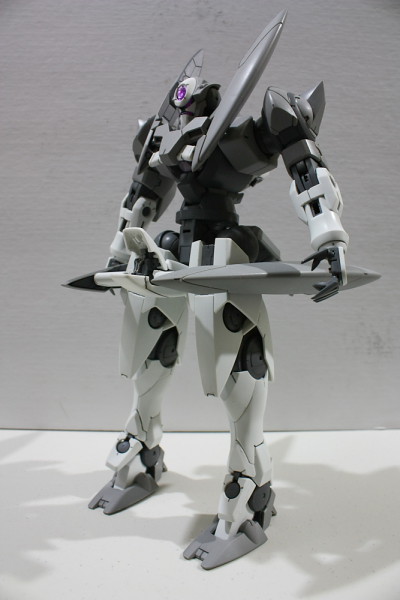 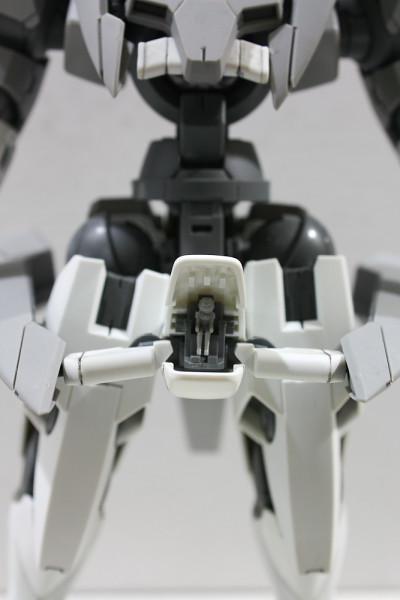 I laughed a bit the moment I found out how the cockpit’s mechanism unfolded. Talk about suggestive. As a mobile suit, it seems highly dysfunctional to place the cockpit someplace where its exposed, then again the GN-Xs were built hastily in the series. Inside is an unpainted Soma Peries. You can opt to place an unpainted Sergei Smirnov there instead. The entire kit also comes with a standing figure of the two soldiers scaled to the mobile suit’s size of course. 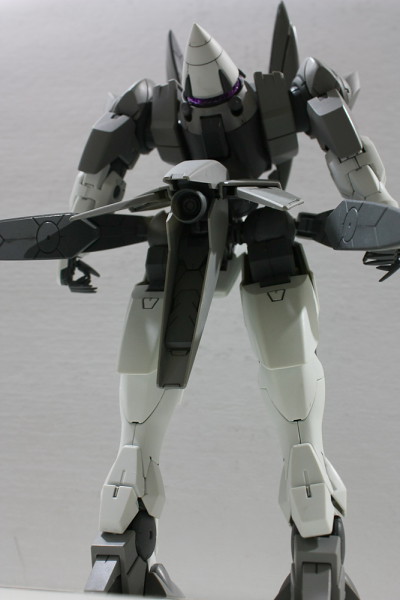 The boosters seem to be out of place in this mobile suit, since it runs on GN particles. It doesn’t even look like a condenser. However, I still like it =D Also forgot to paint on the back part, which I’ve already panel lined on as of this writing. Correcting nibs is harder after top coating since you’ll also have to remove the top coat and applying it afterwards won’t give it an even finish look. 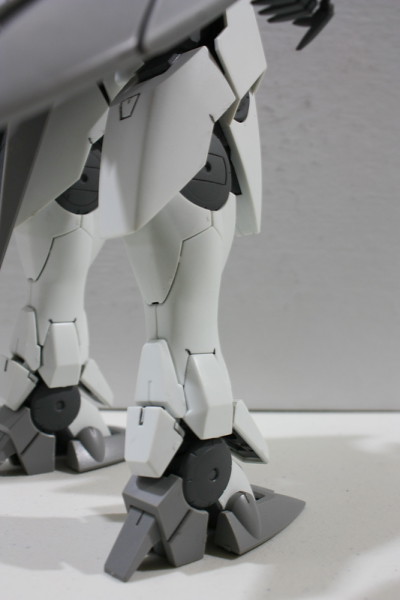 Can’t believe I missed a part there though. The legs were the bloodiest to panel line by the way. It was intensely tiring and laziness was trying to take me down at every line I made. 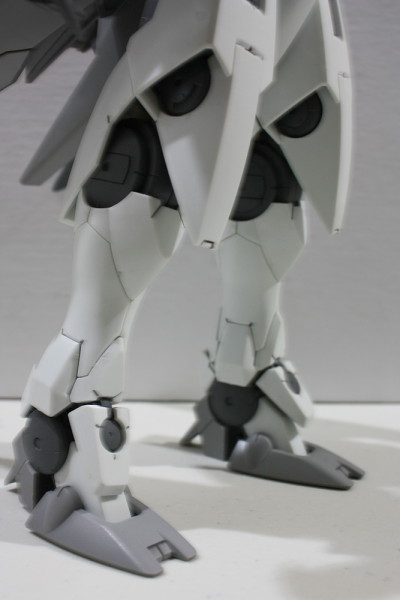 The entire feet of this mobile suit is unbelievably small and posing it while standing uo might be easy, but keeping it that way is tough. 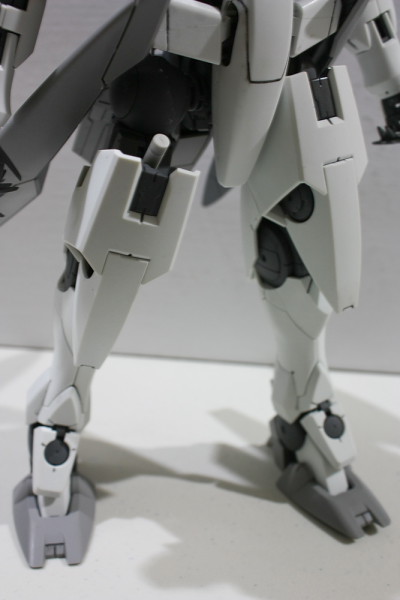 Underneath that knee armor are two Beam Sabers, one for each knee. 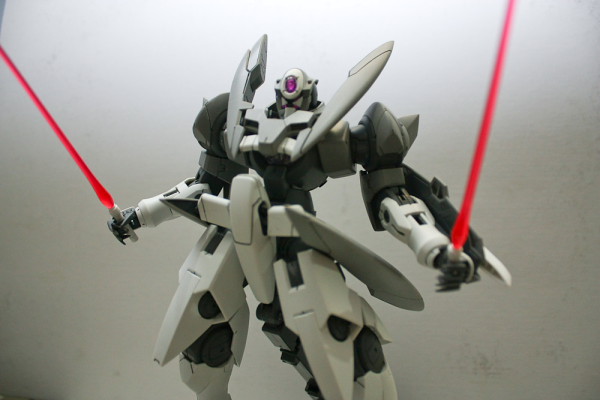 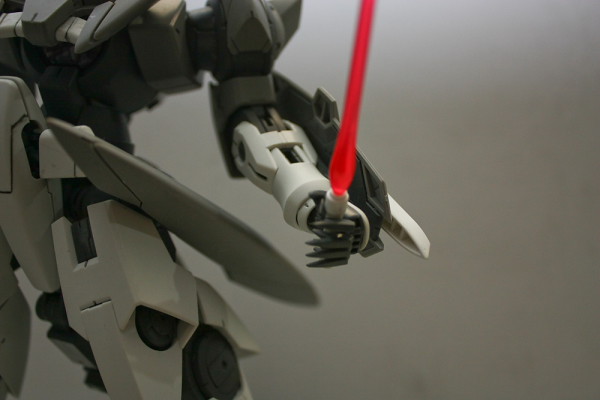 Sith looking beam saber makes it stand out even more than the traditional pink sabers wielded by most mobile suits or those green beam sabers from Wing. 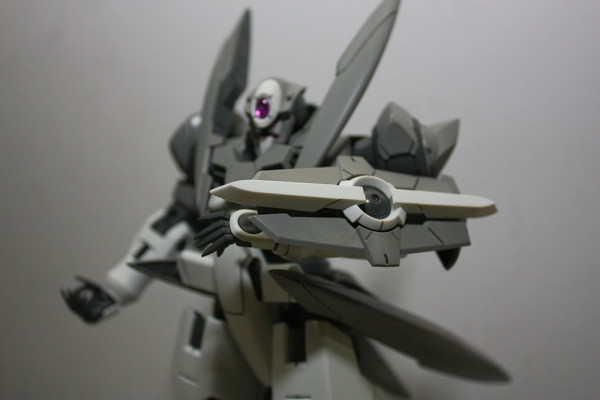 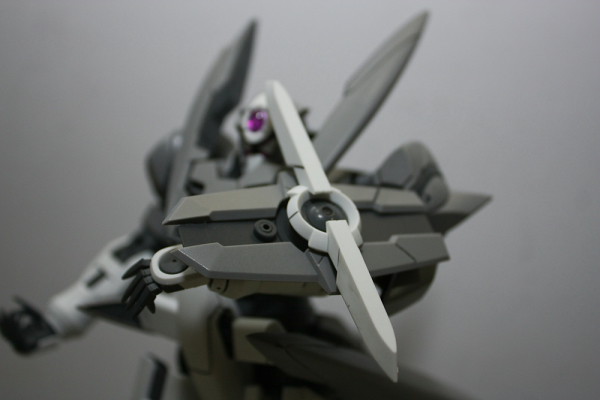 The shield can remain static or it can spin (in the series at least) to parry incoming projectile attacks like missiles. 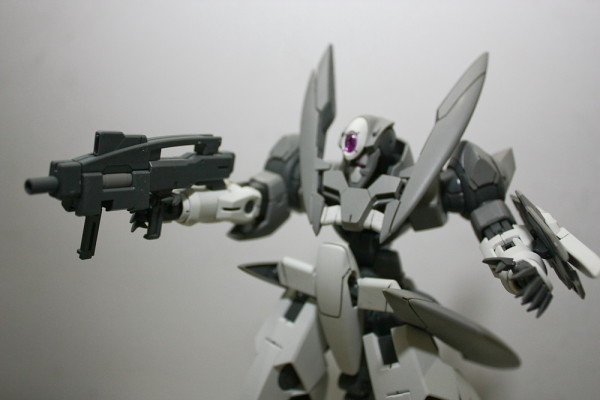 The GN-X carries a standard beam rifle that is short barreled. I don’t remember much about the differences between the short barreled and the long barreled ones, but I do prefer the longer one. 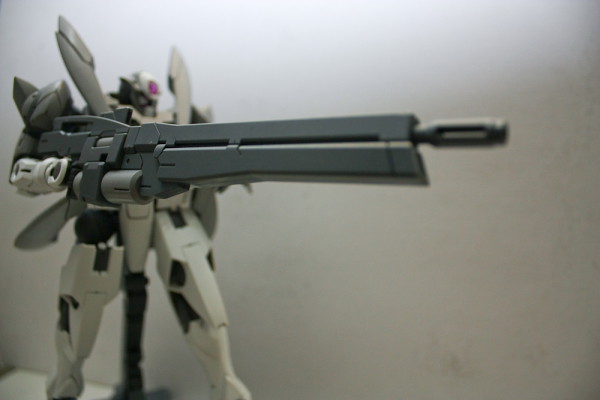 The long barrel part can be directly attached to the standard rifle making it look more awesome than its uzi-looking brother. I’m a sucker for awesome armor and nice looking guns when it comes to gunpla. So you could just imagine how much I questioned Gundam G when it first aired in the Philippines after being exposed to the likes of Wing. 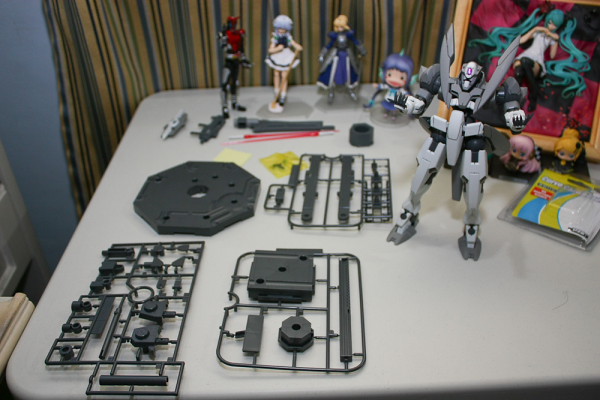 Also bought stand for the GN-X because of its not too sturdy feet. Just because it’s a stand doesn’t mean you just leave it alone. It will look a lot better if you sprayed topcoat. 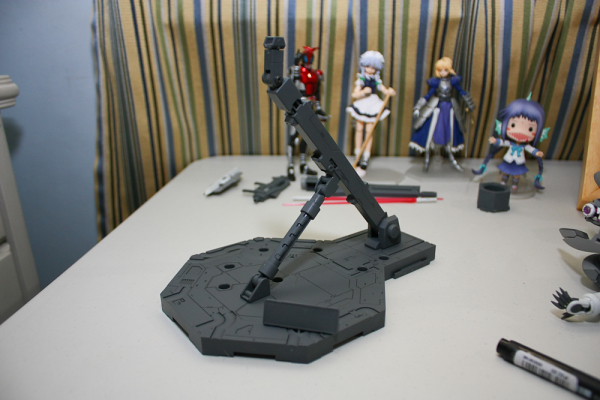 Assembled with top coating, this one looks infinitely better than before. Glad I decided to give it my all even if it was simply a stand. 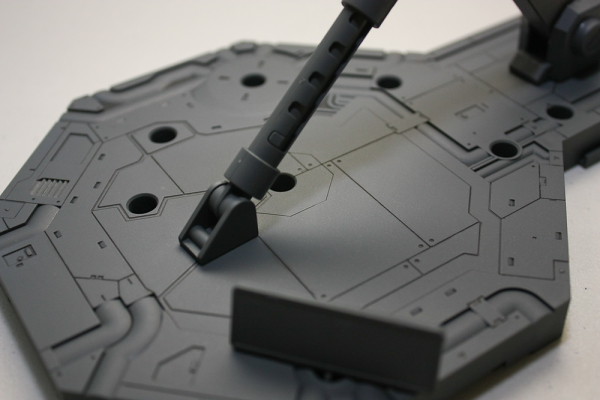 I even panel lined it for crying out loud. My patience level was already at its limit because I really wanted to get this over with so I can start with the other figure reviews I have and the Gundam Qan-T that’s been waiting for me here. 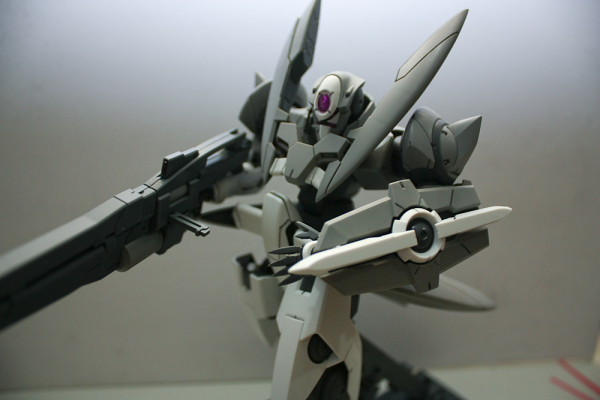 Like all things in life, you can’t simply half-ass and tell yourself that its ok to compromise just because you were too lazy and impatient. I’m glad I gave gunpla another chance. Will my next project (the Qan-T) be my last? I doubt it really. The feeling of accomplishing or building something this painstakingly hard while trying to maintain some level of quality in your work is tough, but highly rewarding.

Gunpla from the past
27 replies