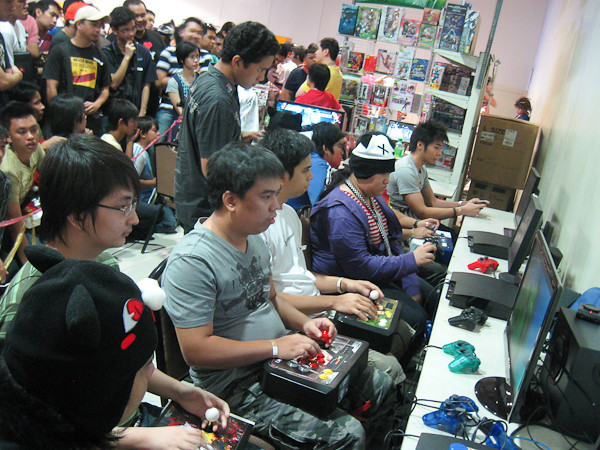 Better late than never I guess. Occupying two convention centers, Ozinefest was held April 8-10 within the premises of Megamall in the Ortigas Area. We pretty much one day that was casual laden, while Saturday and Sunday were dedicated for the Blazblue CS1 tournament and the Marvel vs Capcom 3 tournament. Both tourneys had a high turnout, and we had to turn down some people who came in late or because the 64-man limit was already fully occupied. 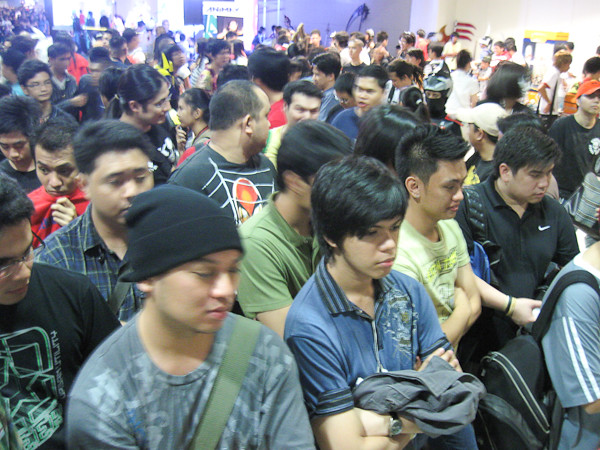 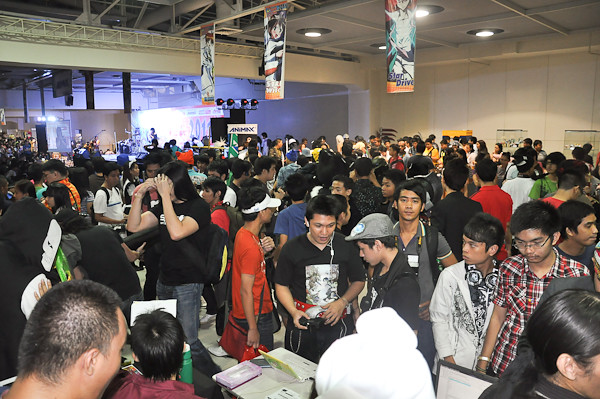 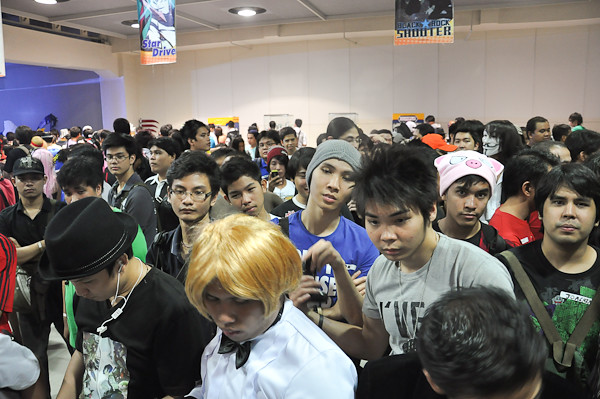 We can’t really claim that everyone here was OUR crowd, but if you can spot the people looking to the right side (from your perspective that is) and in front, chances are those are the guys who came to play and fight =D 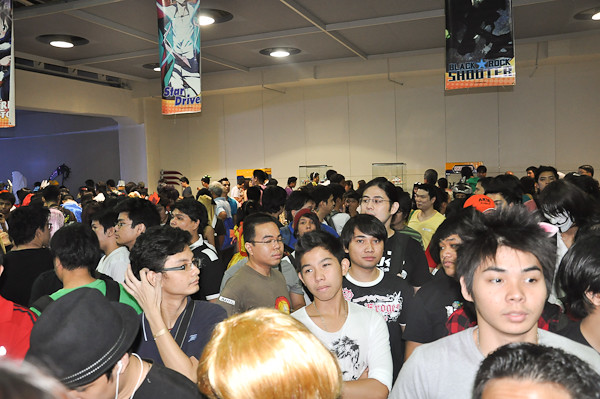 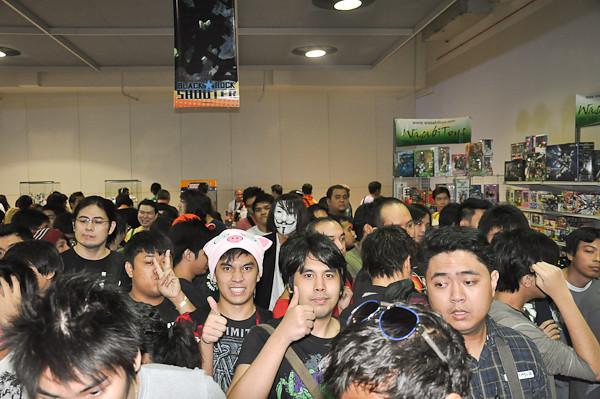 Really crowded. We do thank the people who participated and played with complete strangers in the spirit of fun. If we can only provide everyone with chairs, we’d do so T__T. Probably our next purchase for events such as these would be a projector for better viewing 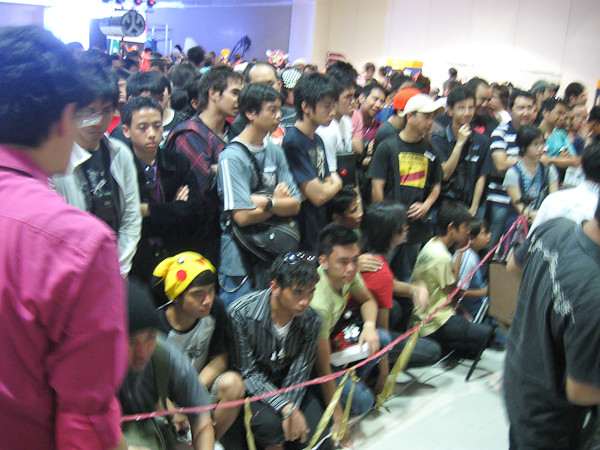 Due to the lack of dividers, we had to use a make-shift one using plastic rope and two tripods. Dividers helped as it gave the players some breathing space and it gave us, the BBPH staff, some peace of mind when it comes to the security of our belongings. 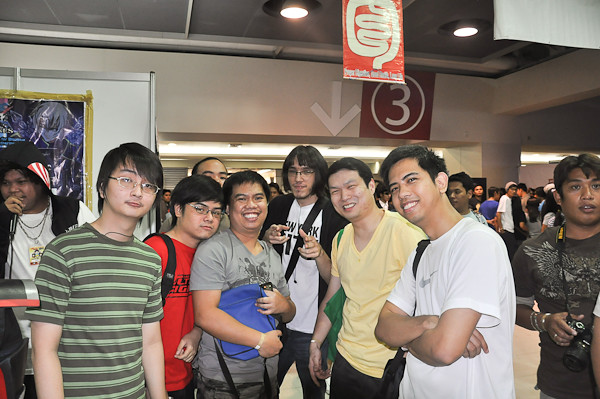 Here we have people from the Philippines Street Fighter Community, Pinoy 2D Fighters. You can check their website here. Great guys for attending our event. Currently I’m taking up a bit of Super Street Fighter 4, but I haven’t gone indepth since I am waiting for the Arcade Edition to come out. Anyone here playing? 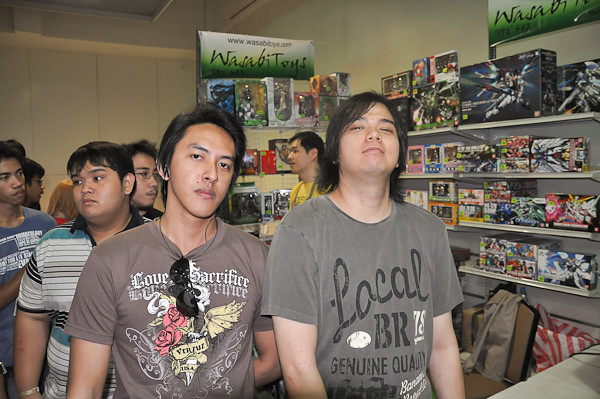 Used to play with the guy on the right there (Dralnu) since my college days in Marvel vs Capcom 2. Played a mean MSP too. Can’t believe that this event somehow got me in contact with friends whom I’ve lost touch with. 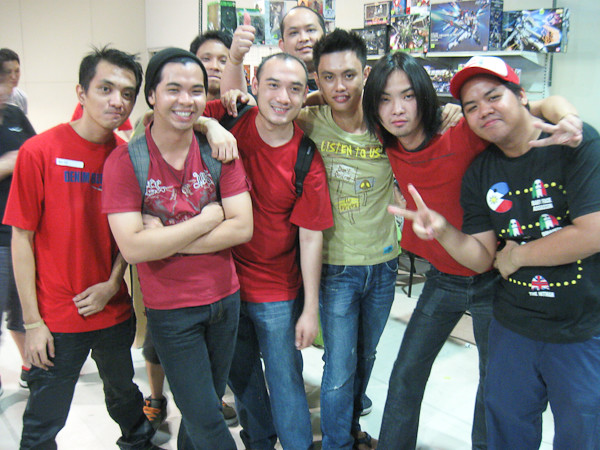 MvC3 players from Northmall. The man wearing an olive colored (is that the right color? Hahaha) won the tournament for MvC3. Thanks for coming you guys! We’ll try to make another MvC3 tournament soon. 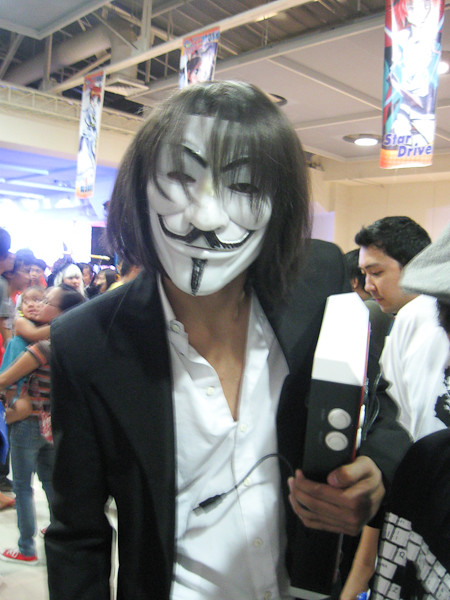 Another player who if I am not mistaken is one of the organizers for the June 4 MvC3 tournament. I can’t give his name, that would defy the purpose of the mask no? hahaha 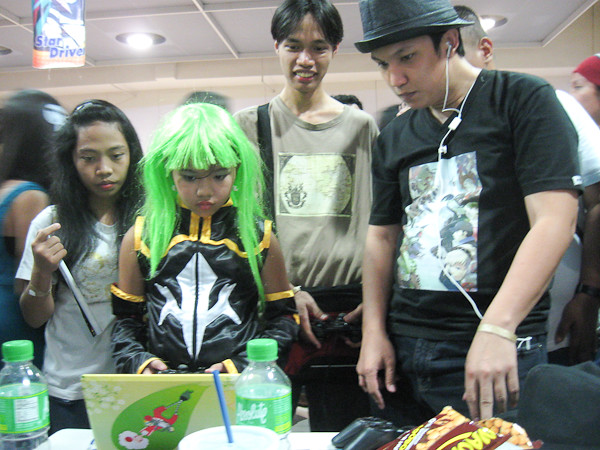 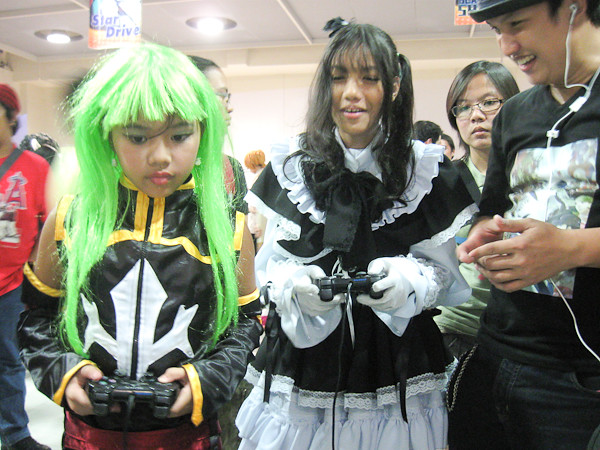 Various cosplayers, big and small, also tried out the games in our booth. Sadly I only have these pictures to show, but there were a lot more cosplayers who passed by to test the games, which was amusing to watch. 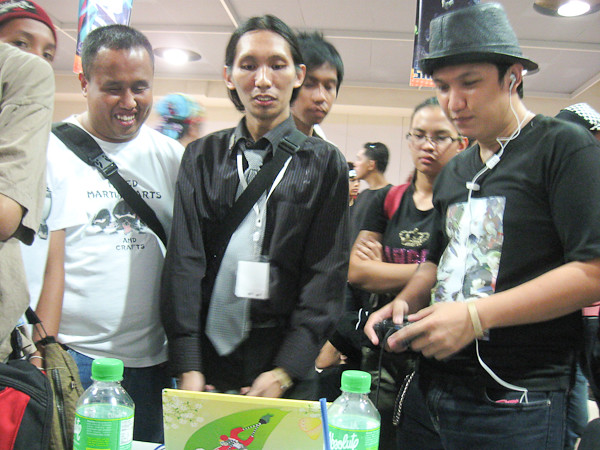 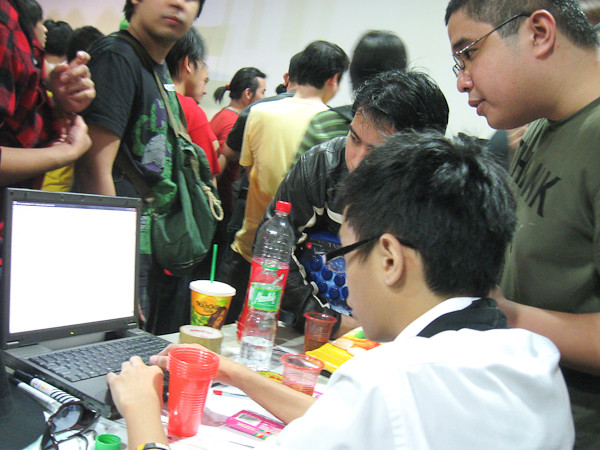 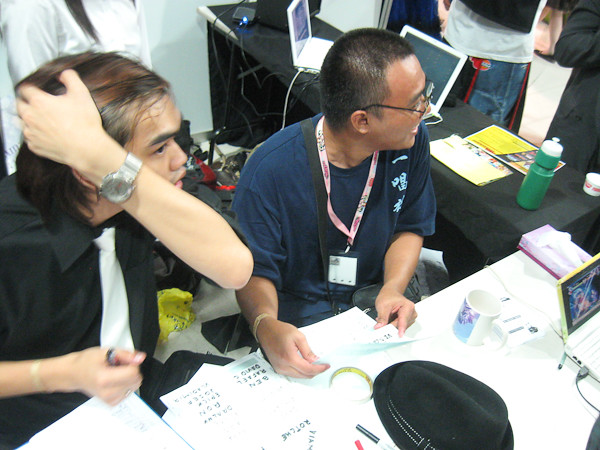 I have to thank the logistics staff, marshals and volunteers for being able to grit their teeths and just go with flow as they managed the tourney software, called out people’s names, assembled the ps3s and brought them to the site, and more!. This tourney wouldn’t be possible without your support! 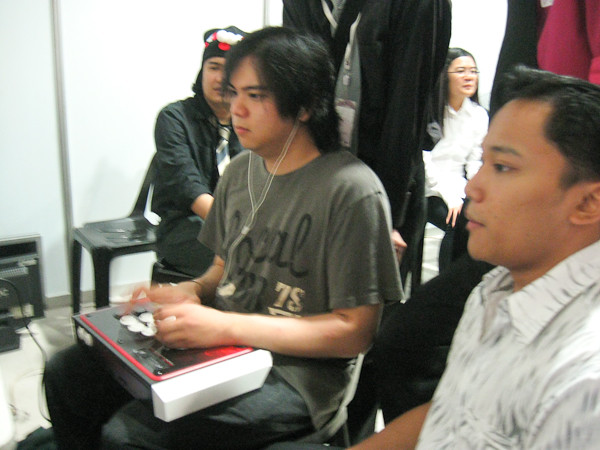 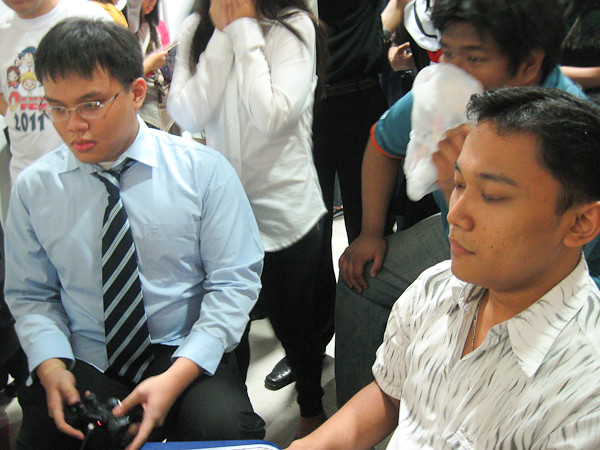 At the end of the day, everyone who helped out were allowed to play free games until the site closed. Some people played the PS3, specifically Blazblue CS1 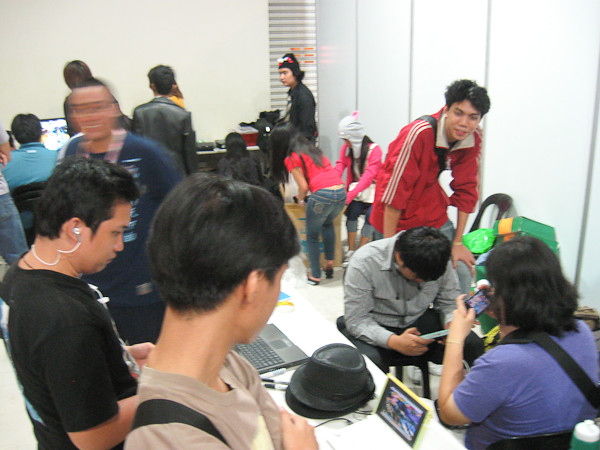 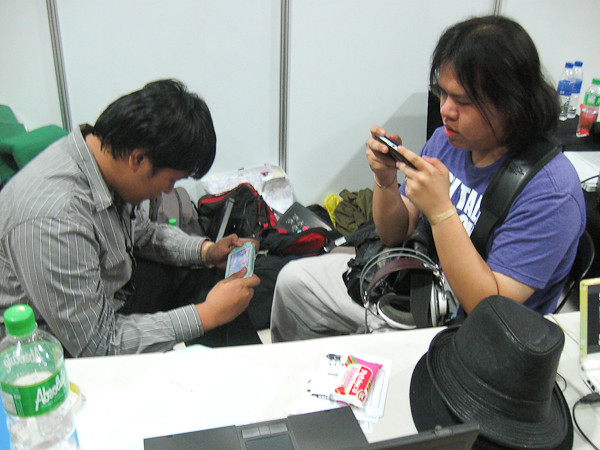 Others were busy enjoying themselves with Blazblue CS2. Has everyone tried the game already? 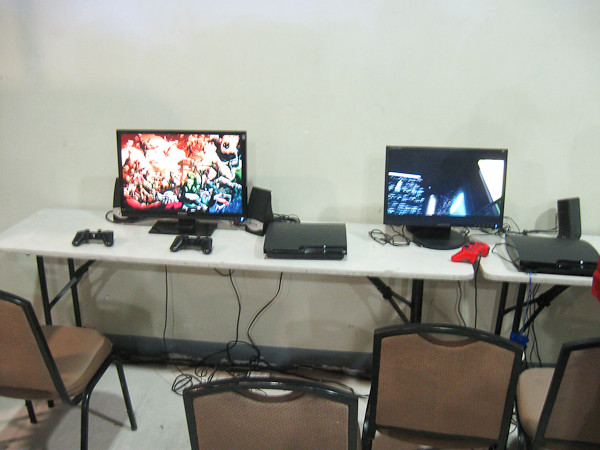 This, empty seats, was a RARE sight during that day. Usually the units would be fully occupied by players and marshals to oversee matches or to make sure no controller gets lost or “borrowed without asking for permission” ^^ 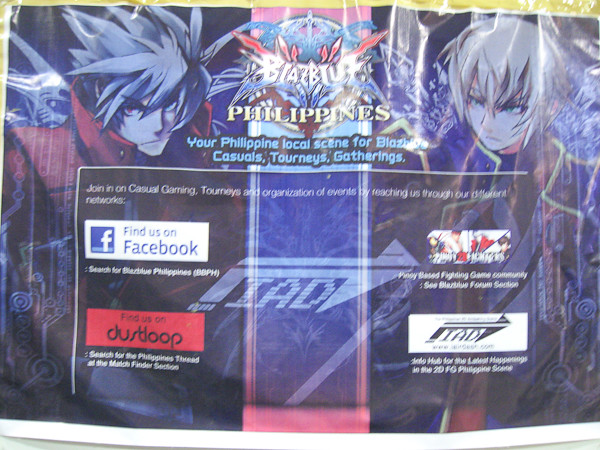 For more information about IAD, feel free to visit our webpage right here. Information on upcoming tournaments can be found there, plus some helpful and insightful articles can be discovered there as well. Happy viewing. Up next, I took pictures of the figure booth just right in front of our booth. I’ll probably upload pics also of cosplayers, but we’ll see =D

I won’t be attending the upcoming toycon as it will be a spendfest, and I’ll be more or less compelled to buy one or two figures. So I’m saving up for AFA11 this November 11-13. If anyone is going there and wants to meet up, just give me a heads up =P

For other Ozine related pics,  just check the links below: